I'm as liberal as the next person (depending on who the next person is), but I do like creative artists to put on a bit of a show. The current trend for authors to have dull, unassuming names is disappointing. They should take a lesson from their predessors.

Perhaps these names were the norm a hundred years ago and future generations will be doubled-up with laughter when they see Martin Amis (actually, I think that's already happening in some quarters).

I have tried to put faces to the names, but most of my Google searches have drawn a blank. However, I do have this interesting photo of Gaylord Hauser: 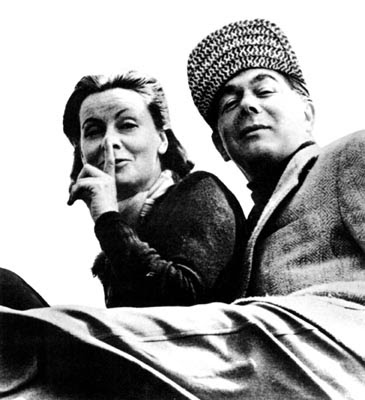 Apparently, Hauser was a close friend of Greta Garbo.

If you're keen to know what a man called Sidney Whipple looks like, he's the taller one on the right: 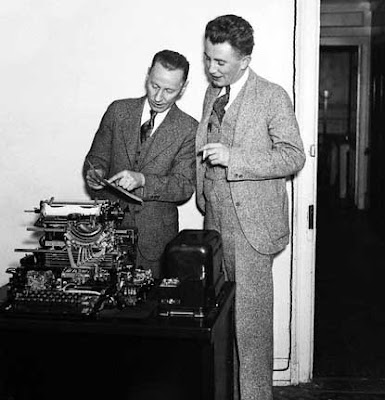 They appear to be pouring over the instruction manual for an extremely complicated typewriter.

Names are so important. I've been seriously thinking of changing my first name to Lord or Earl, as I'm sure that this would improve my prospects. Prince would probably be taking it too far.
Posted by Steerforth at 9:54 pm

just imagine the fun that could be had if a few of them paired up..

Surely most of those are pseudonyms ... People don't tend to use them much these days.

Unfortunately, the idea of using titles as first names is already catching on, at least in the states. There are boys in my city named Sir and Mister.

My grandfather claimed to have grown up with a boy named Senator, but he may not have been serious about that.

I am not sure which one I like the best.

The modern gal may want to hyphenate: Phyllis Bottome-Cumming

JRSM said...
This comment has been removed by the author.
1:27 am

I wonder if Sydney Whipple is any relative of much-reprinted-by-Persephone Dorothy Whipple?

I love the idea of someone being called Senator. Very Dynasty.