I liked the nineties. After all, they began just after the Berlin Wall fell and when Nelson Mandela was released from prison, a few weeks later, it felt as if we were entering a golden age of democracy and general niceness.

It just kept getting better. The following year, the Cold War came to an end with the collapse of the Soviet Union and in 1992, a Democrat entered the White House for the first time in 12 years.

The 1990s were also a breath of fresh air, culturally. No more "Greed is good". The age of hair gel, Lymeswold cheese, shoulder pads, pastels, Phil Collins and Stock Aitken and Waterman made way for hippie chic, organic food and guitar bands. Even if that doesn’t sound so good, at least we saved money on hair products (and those artificial fibres gave people thrush).

What is the legacy of the “Noughties”? 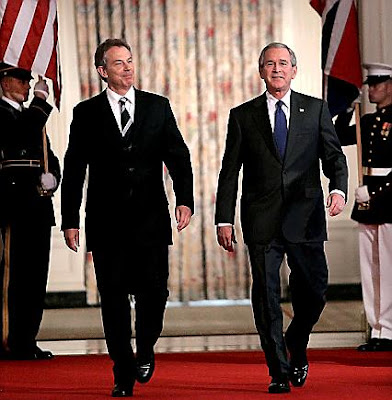 ("Tweedledum and Tweedledee agreed to have a battle...")
But despite the two gentlemen above, it hasn’t all been bad.

Culturally, this decade has produced an embarrassment of riches.

I’m not going to attempt to list the highlights, but my own favourites would include The Corrections, Cloud Atlas, the Tate Modern’s Matisse-Picasso exhibition in 2002, the stunning Inuit-language film Atanarjuat, the Fast Runner, Brian Wilson’s Smile tour in 2004, the 2006 Royal Opera House production of Lady Macbeth of Mtsensk District by Shostakovich, Melvyn Bragg’s In Our Time series on Radio Four, Goodbye Lenin, the triumphant return of Doctor Who, Downfall and, perhaps the thing that surprised me most of all, a remake of Battlestar Galactica that was everything its predecessor wasn’t. Honest.

However, in spite of the namedropping, I've lived in a cultural wilderness . In the list of the 50 best films of the Noughties, I think I’d watched eight. I missed seven of the top ten art exhibitions, all of the best albums (albums are so last century) and most of the highly acclaimed dramas like The Wire, Sopranos, 24, Six Feet Under etc.

I blame it on having young children (Cyril Connolly was right!) and not living in London.

On the home front, the last ten years have been rather mixed. I began the decade earning more money than I do now. I was managing a London bookstore with a turnover of £2,000,000 and enjoyed rubbing shoulders with the great and the good of the literary world (actually it wasn't that brilliant, but at least the drinks were free).

However, a boy was born and everything changed.

I soon found that the "work-hard-play-hard" life of London bookselling didn’t dovetail neatly with a baby that screamed all night and a wife who was sliding into postnatal depression from sleep deprivation. In a rash moment, I decided to leave London and take on a less demanding role. Goodbye dear canapes!

I paid a high price for my decision: my salary was reduced by 25% and my career ground to a halt for several years (my new shop was the cultural equivalent of Devil's Island).

However, leaving London was still one of the most sensible things I've ever done. Moving enabled me to swap a flat in Twickenham for a Victorian house in Lewes and I reduced my daily commute by half, giving me more time to listen to my son screaming.

In London I always felt as if life was elsewhere. I no longer had that feeling.

On a graph, my career trajectory has followed the same boom and bust pattern as the property prices: gradual ascents with sudden rises, followed by dramatic crashes, tentative recovery and periods of stability. At the moment things seem to be on the up, but I'm acutely aware that they could also change quite quickly. My current bosses are very mercurial.

There is an old joke that goes something along the lines of "If you want to make God laugh, tell him your plans." The last few years have taught me how true this is.

This is, after all, an age of uncertainty. Happy New Year.
Posted by Steerforth at 7:00 pm

I recently came accross your blog and have been reading along. I thought I would leave my first comment. I dont know what to say except that I have enjoyed reading. Nice blog. I will keep visiting this blog very often.

Thanks Lucy. I wish you a very Happy New Year.

very good piece, I'd totally forgotten about Lymeswold... the Sinclair C5 of the cheese world, I still have very vivid memories of the triumphant news reports......

I’ve actually watched 24 of those 50 films much to my surprise (assuming we’re looking at the same list) but I can’t say I agree with all the choices. Where was Let the Right one In? Or The Dark Knight? Or Atonement? Or Children of Men? Or The History Boys? Or Snow Cake? Or The Hours? Or Ghost World? Or In the Bedroom? Or Requiem for a Dream? Or even Star Trek for God’s sake? Films are so subjective. Ask me tomorrow and I could list a dozen more once I’ve had a chance to think about it.

From last year the one thing, a bit like Battlestar Galactica, was the remake of The Prisoner, which I make no apologies for downloading off the Internet. I’ll happily watch it again when it comes on TV here. It’s the kind of show, much like the original, that requires multiple viewings. Considering how much I was expecting it to fall flat on its face it most certainly did not. It’s its own thing but it works very well indeed, very well.

I expect for many the pairing of McKellen and Stewart in Waiting for Godot would be a highlight in much the same way as Pinter’s version of Krapp was in 2006.

If I can make a personal observation you seem much happier these days. Your leap of faith worked out well. You could have fallen flat on your face but I’m glad you didn’t. Money isn’t everything. I don’t miss the job I left three years ago. It had come to define me and I really didn’t much care for the me I had become. The me I am just now is not my ideal but we’re getting there. Turning one’s life round is a difficult thing especially when you end up going against the flow.

Brilliant post. Being mostly a glass half full optimist, my fingers are crossed for the 'teenies' or whatever we're going to call them in ten years time. Happy new Year!

Happy New Year to you Steerforth. I can't name one decade which has been better than another for me though I suppose I have got happier and more confident as maturity has kicked in (notwithstanding a nasty redundancy). If only I could have a stable love life and some worldly success, things would be peachy. Luckily the call of the pram remains non-existent, which I consider a blessing.
What I despair of in the last 10-15 years is the decline in standards and behaviour, both public and private. If it continues at its current rate I don't think I want to live to be too old.

Happy New Year, Steerforth. Thanks for making the worldwideweb in the last couple of years a brighter (in both senses) place.

Happy New Year, Steerforth:
There are good years, bad years, and ones we'd rather not think about.

I've developed a mantra for 2010: "It could be worse, I could have mad cow disease." It's working so far but then again it's only January 1st....

I remember telling a friend, it must have been '95 or '96, "These are the Good Old Days". Clinton was our man. We had peace and prosperity.

I totally understand your choices. A man who puts his marriage and his family first will have little to answer for.

Happy New Year, Steerforth, and thanks for doing your blog. I have enjoyed it very much.

Minnie said...
This comment has been removed by the author.
12:41 pm

Thank you all for your kind words (and thanks for the Facebook link, John). One of the best things about the last decade has been the advent of blogging. I have "met" so many interesting, witty, decent and human people through the blogosphere during the last few years.

Jim - I'll take your advice about The Prisoner. What little I've seen of it looked promising.

You're definitely right about the telling God your plans. Both exciting and frustrating that everything can change so suddenly and nothing is ever as expected. Great piece though. Took me back. Here's for the 20Teens.