Books of the Year

Everyone seems to be having a round-ups of their books of the year, from the national press to the blogerati. As this supposed to be a book-related blog, I feel duty-bound to come up with my own recommendation: 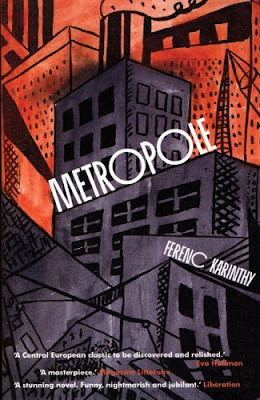 My book of the year has nothing to do with 2009. It was published in Hungary in 1970 and an English translation didn't appear for another 37 years, but I read it this year and I'm convinced that it will eventually be recognised as one of the great works of European literature.

The plot is simple enough: Budai, a linguist, is flying to a conference in Helsinki. After the plane lands, Budai soon realises that he is not in Helsinki, but an unknown city with an unfamiliar language and script. Even worse, although Budai knows a smattering of most of the major European languages, nobody understands a single word he says.

Metropole is a masterpiece of alienation, with a dreamlike quality that reminded me of Kazuo Ishiguro's The Unconsoled. However, in Ishiguro's novel, the main character is lauded by the local citizens. In Metropole, Budai feels completely invisible.

The lazy option would be to use the term "Kafkaesque". Metropole certainly has reasonances of Franz Kafka, but in Ferenc Karinthy's vision there is no malign state apparatus controlling events. Metrople is the ultimate existentialist nightmare in which the individual finds themsleves completely alone in a meaningless, uncaring universe. Having worked in Slough, I'm very familiar with that feeling.

A few years ago, I read Sven Lindqvist's wonderful Desert Divers, which included a chapter on the eccentric Frenchman Pierre Loti. Inspired by Lindvist's account of Loti's exploits in Turkey, I impulsively booked a flight to Istanbul and arranged for a local hotel to pick me up from the airport.

It was a perfectly organised short trip, but from the moment I arrived, I was plunged into a situation that had echoes of Metropole. I won't recount the long story here, but I distinctly remember feeling like a ghost, passing unnoticed through crowds of people. This photo sums it up, in which I merely appear as an oddly-shaped shadow: 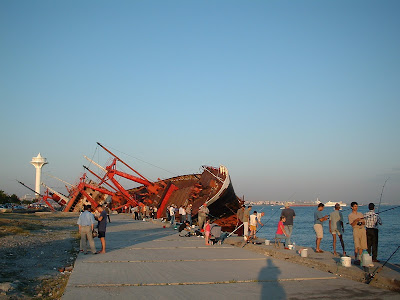 On the penultimate day, I got the worst bout of food poisoning I've ever experienced and collapsed in a street, too weak to even stand. People rushed past, seemingly oblivious to my presence, as if I had become some sort of non-corporeal being. I have never felt more alone.

When I read Metropole, I knew exactly how Budai felt. I was that shadow.

I haven't read that much this year. Ironically, my new job selling books leaves me very little time to read, but I would recommend two other books, one of which was actually published in 2009. First, W F Herman's Beyond Sleep is a witty, intelligent, playful novel that consistently delights and surprises. Second, M J Hyland's This is How, which should have won the Booker, but was probably too good.
Posted by Steerforth at 8:06 pm