Last week I came across one of my best finds yet: a Victorian photograph album from the 1870s, featuring a group of actors and their families. Beneath its tatty exterior, the album is a treasure trove of fascinating photos, many of which are surrounded by beautiful embellishments, hand-painted in watercolour: 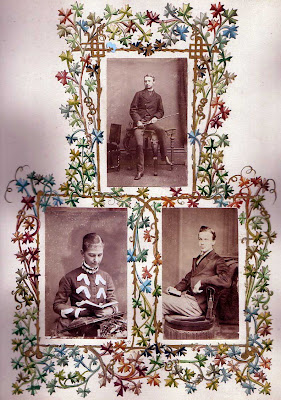 For many of us, the word Victorian is synonymous with respectability, discipline, temperance and piety. Photographs from the period seem to ratify this view, from the portraits of dour-faced, black-clad families to the arch-miserabalist herself, Queen Victoria.

However, the unsmiling faces were often the result of the ridiculously long exposure times, which required fixed expressions. The beauty of this album is that whilst it contains many conventional portraits, there are also quite a few snapshots of people smiling and having fun. 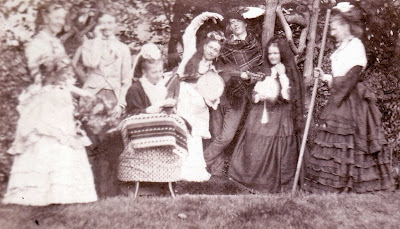 Unlike many of the albums I've come across, there are names, places and dates. For example, the two photos below have the caption "Characters Represented in a Charade at 'The Bank'. Jan 17th 1873." 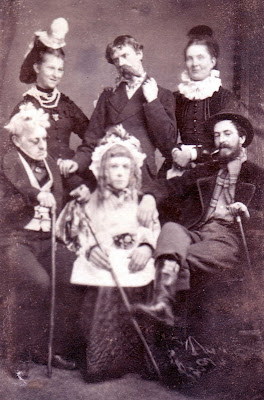 The gentleman in the Widow Twankey outfit is called Charlie Wright. 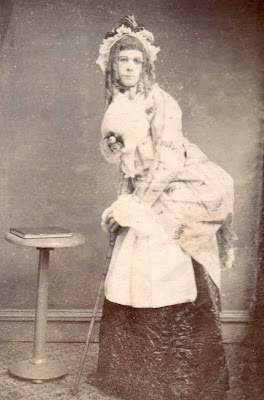 On the opposite page, there is a scene from another production called "The Proposal": 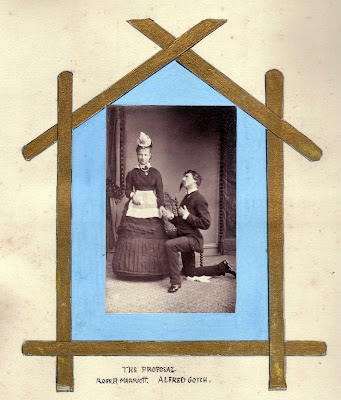 But it isn't just the theatrical productions that appeal. I also like scenes from family life, some of which are surprisingly relaxed and informal, by Victorian standards: 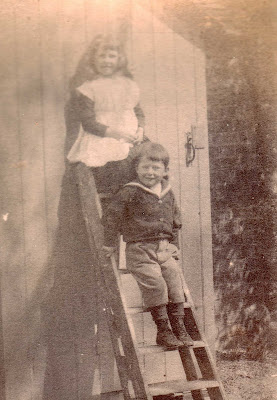 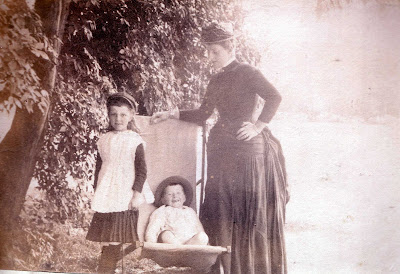 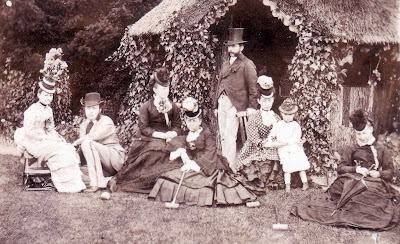 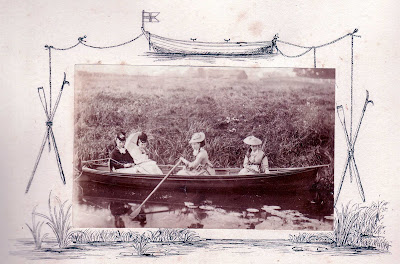 You might argue that whoever complied this collection had too much time on their hands, but compare this to the nadir of photo albums: the 1970s Selfix variety, with adhesive pages and Kodak Instamatic pictures. Not only were they hideously ugly, but they didn't even work. My parents' albums started to disintegrate in 1982. 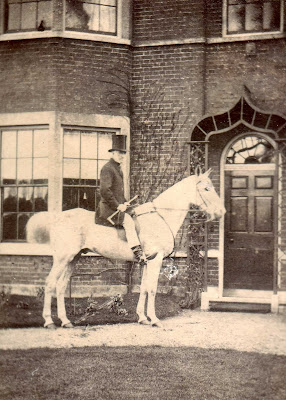 Those were the days. Perhaps this genetleman would have eyed my car with envy, but I'd happily swap my boring, dependable Citroën Xsara Picasso for a horse (top hat included, of course). 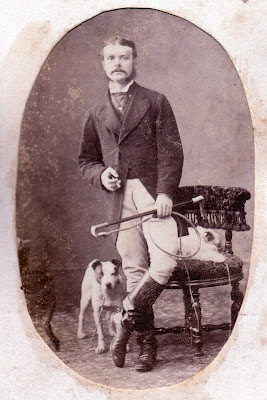 Was he a cad and a bounder? Did he get one of the maidservants up the duff? 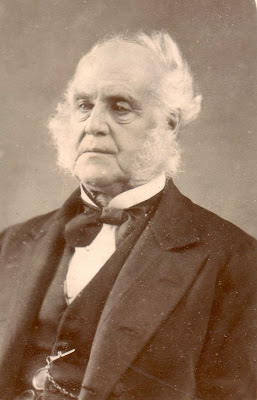 What I like about this photo is that we may be looking at the face of a man who was born in the 18th century. He would certainly have been alive when the Battle of Waterloo took place. 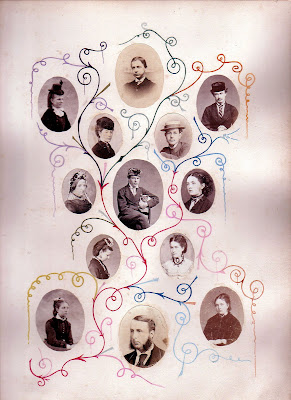 There are many people in the album, but this page apears to include the major figures in the circle of friends and family. 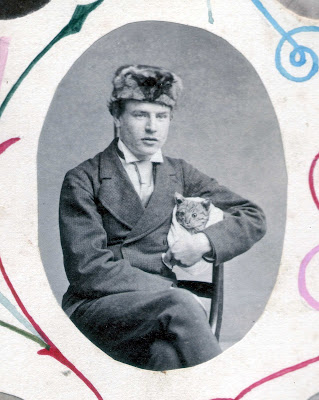 This young man, adopting a "So we meet again, Mr Bond" pose, is the centrepiece of the page. Who is he?

The album doesn't mention where these people lived, but most of the place names mentioned are in Cheshire and Lancashire: Rock Ferry, Whitefield, Manchester and Southport. There also seems to be a connection with Melton Mowbray.

I shall have to do some more research. There is a story to be told, although I think it's unlikely that I have a bestselling non-fiction title in the making. Kate Sumerscale can sleep safely in her bed.

What strikes me most of all is what an interesting, likeable, rather Bohemian crowd of people they must have been (a stark contrast to the rather austere folk of Grimsby in the photos I published ten days ago). They appear to have led a rich life and come across as the antithesis of the stereotypical image of the Victorians.

How sad that this beautiful album almost ended up on a landfill site.
Posted by Steerforth at 11:03 am

Try ancestry.co.uk. I found out all about Lucy Nicholson that way. I had a coded postcard from her swain and was delighted to discover that they had married.

It looks promising - I've already found two names - however I don't fancy the fees. Is it easy to make full use of the free 14-day trial?

Rock Ferry is close to my erhem...'ancestral home' - that part of the world is full of geneologists with time on their hands, and the museum in Chester is pretty hot on this sort of thing.

It's a superb find and of huge social value. I was particularly interested in the Eastern style gazebo / veranda affair on the front of a Victorian house - I've seen the remains of similar items before - and there are a number of houses in Clive Vale with florid Indian style detailing inside and out - it would, of course - have been garishly modern and 'outre' - almost vulgar... a bit like new fangled pebbledashing or fake half timbering in the '50s - lovely stuff.

I was impressed at how much care went into the album - and how 'happy' and relaxed the family looked - a combination of long exposure times and social structures makes this a very rare thing indeed.

Until last week, I thought that Rock Ferry was just an initially appealing but ultimately annoying bestselling album. We live and learn.

You've whetted my appetite and I'm tempted to visit, particularly as it's so near to Port Sunlight.