Planet of the Apes

This image is doing the rounds in the blogosphere, but in case you haven't seen it, this photo was published in the November issue of the National Geographic. In the foreground is the dead body of a chimpanzee called Dorothy, who died of heart failure. 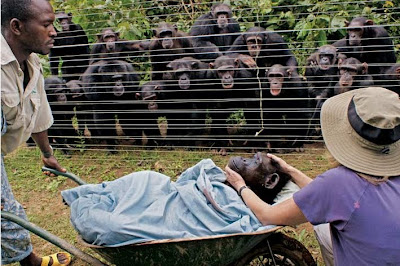 What makes this picture so remarkable and incredibly moving is the sight of Dorothy's companions watching her from the other side of the fence. One article referred to the "grieving chimps", but instead of the tired cliches of anthropormorphisation, I'd rather celebrate the magic of chimpdom. Almost human is an insult.
Posted by Steerforth at 10:19 pm

No I hadn't seen that. I'm glad I have. That tired word respect /respicere -to look back, seems apt here for once.

What an extraordinary, touching, picture, & how wonderful. Thank you for posting it.
PS. Always thought David Hunter a fine figure of a man.