Now that my bookselling career is drawing to a close, I have been reflecting on some of the writers who were either really successful or were tipped as the next big thing during my first few years in the trade. I have forgotten many names, but a few stick out. For example, I remember selling lots of Fay Weldon novels and having to restock the entire backlist every few weeks. Today you'd be hard pressed to find a single title in the average Waterstone's. And whatever happened to the once-popular Tama Janowitz? Here is my list of yesterday's heroes:

The list could go on if I had a better memory. You may disagree with some of the names chosen and it's possible that moving from London to provincial bookselling in the mid-90s has disorted my view of things. But the fact remains that many of these authors (most of whom are still alive) have dropped of the radar, replaced by new names. Why?

The glib answer is that fashions change, but there are many other factors at work. I can think of at least one writer who annoyed their publisher so much that their backlist quietly went out of print. Others were eclipsed by authors writing in a similar genre (Scott Turow's demise can be directly traced to the ascent of John Grisham).

From my perspective, there isn't one writer on the list that really excites me, with the possible exception of Peter Benson and there are enough newer writers around who are much better. You may feel differently.

To return to Fay Weldon, she once came to a shop I worked in for a signing and was charm itself. All of the customers were delighted, with the exception of one man who looked confused and disappointed. Later I discovered that he was a metalwork enthusiast who had misheard someone talking about the signing and thought that we were having a welding evening. 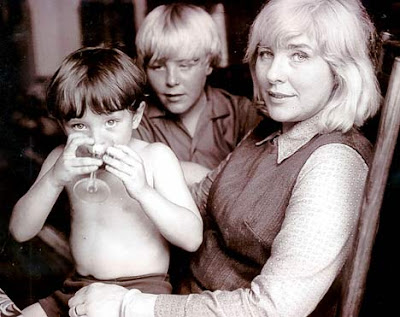 Posted by Steerforth at 8:20 pm

Very intrigued to know who so annoyed their publisher...

Yes, Alison Lurie has vanished, hasn't she? Perhaps because 'The Last Resort' wasn't very good she lost a lot of followers? Seems unlikely... I know I've seen a LOT of books by writers on that list in various remainder shops. You couldn't moves for copies of 'Slaves of New York' at one place.

Caryl Phillips continues to write fiction, nonfiction, scripts for film, and this year a play of his was staged in London. He has won numerous awards and his novels continue to be reviewed with high praise. Notably, Dancer in the Dark, published this year in the States and, I believe, in the UK in 2006. He teaches at Yale University. He has a website. One of the best writers working today.

City in a Bottle - I'm aware that Caryl Phillips continues to write and always gets good reviews, but from a bookseller's perspective his books don't sell.

This impression may be a reflection of the fact that I have left London, where a black writer's sales are invariably going to be higher than in the 'provinces'.

I picked him because I enjoyed reading 'The European Tribe' in the late 80s and expected him to become more commercially successful than he has.

Brian Moore might be forgotten by many but he is being rediscovered by a few .....

I don't think John Kennedy Toole is doing too well.