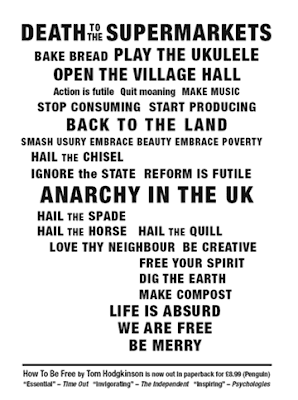 Although I have only recently quit my job, I actually stopped working several months ago.

Like most people I used to dread the thought of losing my job and had many sleepless nights mulling over the prospect of condemning my family to a life of penury. I was becoming mentally and physically exhausted, but felt that I had to keep going. Then one day everything changed and I suddenly realised that I didn't have to tolerate any more crap. We always have a choice, although it may not always feel that way.

Money is in short supply and I know that at some point in the near future we will drain our bank account dry, but I'm amazed that we've lasted this long. I didn't realise how much money I'd save by not working. Not only have I saved a fortune in fuel and lunch costs, but I've also had the time to do jobs that I would have had to pay other people for (my garden has been completely landscaped for under £500, which is considerably lower than the £3000 I was quoted). It's been a revelation.

I have also learned the art of shopping around - something I never had time for when I was working 40 or more hours a week. I know that a box of tissues will cost 35p in Asda, as opposed to over £1 anywhere else. I have also discovered that my children are much happier playing with driftwood on a beach than going to a theme park. Holidays abroad are out, but thanks to global warming England is becoming positively Mediterranean. Food is becoming a problem - prices have suddenly shot up during the last couple of months, but there are always cheap options.

I don't intend to live like this on a permanent basis. I want to work and would find it very frustrating if I didn't have my duties as a Justice of the Peace to keep me busy. But even if I do earn a decent salary, I will never forget the lessons I have learned during the last few months. Time is more important than money.

If you're stuck in a rut, I'd strongly recommend Tom Hodgkinson's book How to be Free. You'll probably find it in the humour section of a bookshop, but although Hodgkinson is a very amusing writer the core of the book is an extremely well-argued polemic against our post-industrial consumer society. Hodgkinson has no problem with work; it's jobs that he has reservations about and the degree to which they dominate our lives.

A few years ago I read a shocking statistic that said if Americans wanted to maintain the standard of living they had in 1949 (and it was pretty good then), they'd only have to work two days a week. Instead they're working their arses off to buy a lot of things they don't really need and only enjoy two weeks' holiday a year. Madness!

I shall be following Tom Hodgkinson's manifesto, with the possible exception of playing the ukulele. As he wisely says: Life is absurd. We are free. Be merry.
Posted by Steerforth at 9:46 pm

I've been rich and I've been poor. But I've never known poverty. What we think of as poor in the developed world is luxury compared to other parts of the world. At the moment I'm poor but I still have broadband. The biggest problem is communicating to people because they've got this mindset that says life should be a certain way and anything else is unnatural. I've suffered burnout twice in my life - the kind where you take pills and it takes months to recover - and that was simply due to overwork. Oh, my bosses all loved me because I always got it done no matter what the cost but the rewards never quite compensated me for the losses.

Ah smashing! You agrarian luddite, more power to your hoe. Great post steerforth - I recommend working for yourself at something with low overheads and start-up cost - once you've done it for three months you will render yourself completely unemployable and will feel, and be, the better for it.

I recently had call to interview Chief Almir Surui, a rainforest tribal chief from the Amazon. He found it hilarious that the west sees his people as living in poverty - as he said - they want for only one thing, all they need is the forest to be left alone and they will be very, very happy and very, very rich.

Messrs Murdoch and Evans - thank you for your words of support. During the last few months I have realised that I am not alone.

I have always envied the tribes in the Amazon that are relatively untainted by any contact with the West. If I had the power to choose where I was born, I'd probably elect to be a part of one of those communities rather than some angst-ridden Westerner.

Well, Chief Almir does have a $100,000 price on his head and has to spend many months of the year away from his family.

If you find his land on Google Maps, you will see that the land around it has been utterly denuded of trees, and there are incursions by illegal logging camps at the bottom. It's heartbreaking.