The Age of Certainty 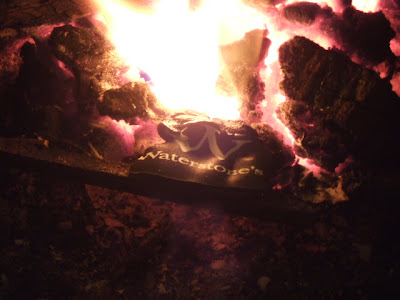 I have resigned from my job as a Waterstone's manager. I have no idea what I'm going to do next, but in spite of this I know that I've made the right decision. I'll miss my friends and I will also miss working with books, but I felt that I had no choice but to leave.

I used to be a manager for Ottakar's Bookstores and loved my job. Under the charismatic leadership of James Heneage, Ottakar's was a wonderful company to work for that valued individuality and creativity over compliance and procedure. As a manager I felt that my remit was to ensure that staff morale was one of the top priorities and I found it really rewarding to see booksellers develop and become managers themselves.

Sadly, in 2006 HMV Media bought Ottakar's and incorporated it into its Waterstone's chain. Within a matter of months every branch of Ottakar's was rebranded and new systems were introduced. I tried to be open-minded about my new employer, but like many of my colleagues, I felt increasingly disillusioned by certain aspects of the business.

It is tempting to write a long, damning diatribe against Waterstone's, but although it might be cathartic to vent my spleen, I would be doing a disservice to the many people who work there who are passionate about books and often do an excellent job against the odds. There are many good things about Waterstone's, but the sum isn't equal to its parts. My own impression is that the company is over-regulated and that there are too many people in middle-management who don't understand the book trade and treat it like any other area of retail, referring to books as product. Bookselling is different.

Perhaps the most succinct and articulate summary of the differences between Ottakar's and Waterstone's was made recently by a former colleague, who wrote:

There seems to be a different definition of what makes a good manager in W - a competent administrator who can follow and implement instructions. O managers were encouraged to focus on running and developing a business. Two different aspects of the same role, but I think many of those who, like you, excel at the latter find nothing satisfying about spending eight hours a day doing the former.

Apparently there is a sea change at Waterstone's. A staff opinion survey revealed that morale was even lower than the senior management feared and this year there will supposedly be a concerted effort to bring back the passion and individuality that made Waterstone's so special in the distant past. The managers I've spoken to certainly seem more optimistic than they have been for a long time. I hope that the senior management have the vision to make real changes rather than cosmetic ones.

If I ran Waterstone's I would scrap at least half of the checklists and reports that are released every week, ensure that a manager's accountability was proportionate to the control they had over their shop and finally, I would make it a sackable offence for anyone to use the acronym JFDI (Just Fucking Do It)!

Between a third and half of Ottakar's managers have left Waterstone's in the last couple of years. Some left straight away, but many decided to see what life was like under Waterstone's before deciding it wasn't for them. Interestingly, in some areas of the country the number of resignations has been lower than a quarter whilst in others it has been well over 50%, which would suggest that the local regional manager has exercised some influence in people's decisions. I have heard some very disturbing allegations, which I won't repeat here.

Financially, Waterstone's is in a stronger position than it has been for years. The latest managing director has introduced many important commercial improvements, including a transactional website and a loyalty card, but it is relatively easy to improve a company that has been poorly managed in the past. The real challenge is to restore that indefinable but vital element that made Ottakar's such a wonderful company to work for: the magic.

I am now unemployed and should be feeling despondent, but in fact I'm happier than I have been for years. I no longer have to lie awake at night worrying about deadlines and targets. I don't have much money but I am free and that feels great. I have also discovered that it's possible to live on very little if you really put your mind to it.

Strangely enough, although I am not working I'm actually busier than ever. In addition to working as a part-time magistrate I have two children to look after, a home to decorate and lots of forms to fill in to prove that I'm not trying to defraud the state. It's a full life.

At some point in the near future I will work again. It may be in the book trade, but I'm also tempted to try something completely different - possibly in the environmental or charity sector. Whatever I end up doing, it will have to be something I feel committed to. Life is too short to spend 40 hours a week doing something you don't enjoy.

In the meantime I have lots of books to read, starting with Tom Hodgkinson's How to be Idle.
Posted by Steerforth at 9:03 am

I resigned from my job in a library after nine years late last year.Most of the staff did not read at all and the assistant library manager told me that it did not matter how a book was written or what the writers style was like.It may be that we have some fellow feeling here.
With a supportive husband I have started doing bar work three nights a week.This pays for groceries and gives me some pocket money.Yes it pays well and no I am not required to take my top off !
Cutting to the chase GOOD FOR YOU.Go for your favourite walk on a Monday morning when your least favourite people are knuckling down to another weeks work,Have an afternoon or two snoozing and reading.A bit of leisured cosiness and civilised sensibility.Have some thinking time .Good luck.

Agree with Angela Lambert, make sure to relish the time you have to yourself just now as I'm sure it won't be long before you're earning a satisfying and worthwhile crust again!

Well done and good luck! Looking forward to reading the posts your (ahem) free time will now allow you to write!

Congratulations. You know that this is the very best decision you can ever make. Tom Hodgkinson is a massive inspiration to me and you're doing the right thing. The big W has some wonderful people working for it, but too many of the geezers who run it don't have a clue about the book trade and they treat books as units and don't appreciate the passion that some people who work there still have. It's only a matter of time before w is seen like WH Smith, where no one is expected to know anything about the product they sell, and the most important thing is that the money off stickers are put in the correct bit of the cover.
Good luck and come and say hello when you can.

And thanks for a fascinating insight into the mechanisations of W.

I hope you enjoy your time off and get enough head space to work out what you want to do next. Good luck.

Respect, as the kids say. That must have been a tough decision and a brave one too.

Hey, Steerforth: good luck! I've been out of the blogosphere a bit and so have only just caught up with this. I'm sad of course: while you were a W manager I could feel that there was still some integrity there, at least in one place! But it was clearly impossible for you, and you were clearly wasted there, and I wish you the very best of luck for the future!

Makes you wonder who is running humanity and for whom. 'Cos it certainly isn't humankind that most businesses are run for!

Well done on your brave decision and I hope you'll find a new direction where integrity does pay (on more levels than one).

Or perhaps those of us who want standards and humanity in life ought to form a breakaway guerilla group and start our own society with great bookshops and customer service second-to-none!

Thank you all for your words of support. It makes a big difference knowing that there are like-minded people out there.

This makes for very interesting reading, especially when I just emailed a job application to Waterstones a few hours ago.

Unfortunately, this is the way of the World now; books ARE just products to most managers. A book may as well be a tin of baked beans to many managers in a bookstore chain like this. At the end of the day, for them, it's about profit.

I agree with you, though, it would be great to get some of that magic back.

I hope that you find something else to love as much as you once loved book-selling, etc. It must have been difficult to make that decision.

I don't understand these chain stores that don't see the differences between selling books and selling clothes, for example. Here in Canada, the Chapters/Indigo big box chains are pushing out smaller indie stores all over the place but I honestly don't understand why. Who wants to browse in a department store where the staff have to wear uniforms and know little to nothing about books?

Thank you for your kind words DreamQueen and good luck with your bookshop!