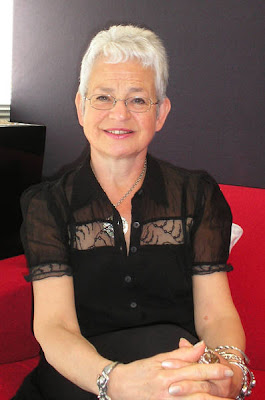 The honours system may be moribund, but I couldn't help feeling a rush of pleasure when I read that Jacqueline Wilson has been made a dame. I can't think of a more deserving author. There are few writers who have done so much to get children reading, particularly children from deprived backgrounds. Also, she has worked tirelessly to promote reading and although she probably became a millionaire several years ago, she hasn't retreated to an ivory tower. Every fan letter receives a personal reply and when she does one of her famous signing sessions, Jacqueline Wilson won't leave until she's talked to the last child in the queue.

At this point I have to declare an interest -I've done two events with her (the first of which was the biggest signing session of her career to date) and she was the nicest author I've ever met.

At the first session, neither Jacqui or I had any idea how big the signing was going to be, but I think we'd both estimated that three to four hours would be enough. In the event I think I'd slightly overdone things on the publicity front and we had a queue that was a quarter of a mile long. Many authors would have insisted on capping the queue after an hour, but Jacqueline Wilson was just delighted that so many people had turned up and the signing lasted for almost eight hours! It was the highlight of my bookselling career.

During the whole session, Jacqueline Wilson didn't take a single break. Afterwards I asked her what her secret was and she replied 'A strong wrist and a cast-iron bladder.'

What impressed me most of all was the way Jacqueline Wilson dealt with her readers. She must have talked to hundreds of people that day, but she made every child feel special and the welcoming smile never wavered. She spent at least a minute chatting to each person and agreed to every request for photographs. It would be easy to assume that this was an example of a writer trying to ingratiate themselves with their reading public, but Jacqui had made her money and didn't need to do these marathon signing sessions to raise her profile.

Some people are very dismissive about the literary merits of Jacqueline Wilson's novels, but when you see a queue of hundreds of excited children it is impossible to be cynical. Wilson has not earned her popularity by appealing to the lowest common denominator. Her popularity rests on her ability to discuss serious issues in a way that entertains, comforts and never, ever patronizes the reader.

Two years after the first signing I held another and had the rather surreal experience of riding on a carousel with Jacqui (it's a long story). After the ride I took this picture: 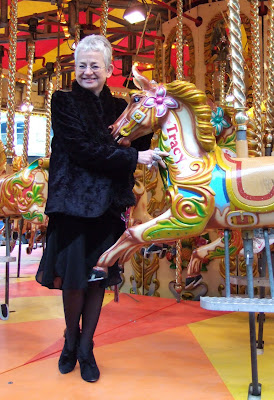 See the name on the horse?

The British honours system is a strange, imperfect anachronism but on this occasion, the decision to make Jacqueline Wilson a dame was a wise one.
Posted by Steerforth at 10:28 pm

I usually do not hold with the honours either but I jumped for joy when I heard about this one!!!

My daughter has found help dealing with all sorts of issues, from reading Jacqueline Wilson's books. She deserves a sainthood!