Some books take time and perseverance to reveal their charms whilst others begin brilliantly but somehow lose their way. Patrick Hamilton's Slaves of Solitude gripped me from the first page and remained utterly compelling until the end.

After his death, Hamilton was compared unfavourably to contemporaries like Orwell and Greene, but this novel is a remarkable achievement and I'm amazed that a man who drank three bottles of whisky a day was able to write such a profound and sober assessment of human nature.

On the surface very little happens. The main character is a 39-year-old woman who has fled the Blitz for a boarding house in a thinly disguised Henley-on-Thames and the novel chronicles her relationships with the other boarders and the threats to her purgatorial equilibrium posed by an American GI and a German friend. However the genius of this novel lies in Hamilton's ability to conjure up the claustrophobic atmosphere of the English boarding house with its petty resentments and unspoken feuds. I stress English boarding house because I cannot imagine this novel taking place in a country like Italy, where people would be less inclined to silently seethe with anger.

The Slaves of Solitude takes supposedly typically English qualities like good manners, self-control and decorum and shows how underneath the facade of civility, people are consumed by hatred, resentment, jealousy and lust. Hamilton's portrayal of the inner life of Miss Enid Roach is a masterly microcosm of English society in the mid-20th century. 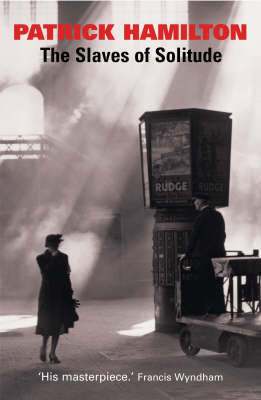 The War is ever present, but rather than heightening the novel's sense of drama it merely acts as a dull backdrop - an enervating fog of rations, blackouts and uncertainty. The distant drone of enemy planes occasionally punctuates the silence of the night, but life is elsewhere and the aircraft never bother dropping their bombs on this drab, provincial town. This is an England that I never knew, but one that I caught glimpses of as a child. I can taste the flavourless, watery soup served to the guests of the Rosamund Tea Rooms and imagine the sterile atmopshere of the dining room, with its whispered conversations and clinking cutlery.

As for Patrick Hamilton, he was one of the most prominent writers of his day. In addition to his novels, he wrote the screenplays for two of the most successful Hollywoood films of the 40s - Rope and Gaslight. His early years were marked by poverty but he became that rare creature, a financially secure writer and like many successful novelists, he was the victim of a posthumous backlash. Hopefully the pendulum has swung back because the Slaves of Solitude is, without a doubt, one of the great English novels of the 20th century.
Posted by Steerforth at 7:09 pm