When I was in my teens I used to complain that Thomas Hardy's novels relied too much on completely implausible coincidences. How little I knew. As I grew older I experienced one bizarre event after another and began to realise that anything could happen. 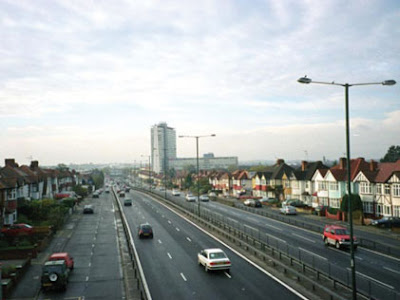 Last week I went to take part in an aptitude test session at Tolworth Tower - a grim, 1960s office block surrounded by roads in a desolate place on the border between the London suburbs and Surrey. When I booked the tests I was asked if I knew where the tower was. I said I had been there before, but didn't mention that it was when I was 17 and on my first date. I wanted to ask a girl out but didn't quite know how to go about it, then hit on what seemed like the brilliant idea of going tenpin bowling. We met at the bus stop and travelled the eight miles to Tolworth Tower's bowling alley.

I thought the day had gone well but she obviously didn't share my views and I never saw her again. I resolved to abandon tenpin bowling as part of my wooing technique.

After the aptitude test I decided to catch the train to Twickenham and revisit the places I had known since childhood. There were a few changes. Every other building seemed to be a restaurant and what had once been a very English area had been augmented by Slavic faces with beautiful cheekbones, Africans and Asians. I had grown up here but searched in vain for a familiar face.

I walked down to the River Thames - this part of Twickenham hadn't changed much in 250 years - and visited the church where my parents married and I was Christened. It was empty and after lighting a candle for my father, I studied a noticeboard to see if I recognised any of the photos of the members of the parish council. They were all strangers. How can you grow up somewhere, attend school with nearly a thousand other local children and, within a short space of time, feel like a stranger? Where had everyone gone? I began to feel slightly depressed.

Suddenly the church door swung open and a woman asked me if would be much longer. I explained that I was about to leave. 'Okay that's fine.' she replied 'When you go can you make sure that you shut the door very firmly - you really have to slam it.' I nodded and just as she was leaving I realised who she was. I wanted to rush after her and say how strange it was that after visiting Tolworth Tower for the first time since our one and only date, I should bump into her like this, but by the time I had obediently slammed the church door shut, she had vanished.
Posted by Steerforth at 10:46 pm

What a beautiful story :) Fact or fiction, I think it would be a well published short-short story.

Oh wow. You have made me cry.

When are you going to write that novel???