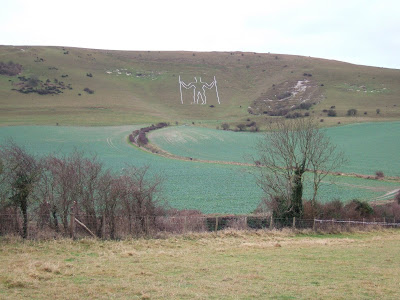 First the party, then the hangover, followed by the obligatory walk in the countryside. I could almost cut and paste last year's entry on this theme.

We went for a walk to the Long Man of Wilmington, a hillside figure that has defied scientific and archaeological analysis and remains an enigma. Nobody knows how old it is or why it's there, although the general consensus is that it's a few thousand years old. Is he a fertility symbol, a warning to enemy tribes, a tribute to the gods or simply a primitive work of art?

During the Second World War he was painted green to stop the Luftwaffe using him as a landmark. Recently he was given a makeover by fashion gurus Trinny and Suzanna on their television show, causing a storm of protest from outraged pagans and members of English heritage.

It seemed appropriate to spend part of New Year's Day visiting something very old and as I'd already seen my mother at Christmas, this was a good second choice.

I can't say I'm feeling very optimistic about the coming year. For reasons I can't go into at the moment, the future is looking a little bleak. I can only hope that the setbacks are temporary and lead to something better.
Posted by Steerforth at 6:17 pm

Happy New Year. If not an exceptionally good year then at least hope 2008 pans out to be one of those years where, looking back from 2009, everything worked out for the best.

And a very Happy New Year to you. Any plans to resume your excellent blog?

Hmmm, that doesn't sound like the most optimistic new year post I have ever read! Hope things turn out well.

My name is Susan Harwood.

It was rather an odd experience, arriving on your blog. First, the Cerne Abbas Giant, not far from us in Dorset, seemed to have upped sticks and moved to Sussex.

Then, I read your warm comments about Jaqueline Wilson. Her brightly covered books litter our house (my daughter loves them) but I have had mixed feelings.

Although we live in a housing association street and none of us have very much money, our immediate surroundings are of the Enid Blyton variety . . . sea, little beach, cliffs . . . and our immediate family has not had to deal with many of the problems Jaqueline Wilson addresses in her books.

So I'd rebelled - I began to feel there needed to be some redressing of the balance, something for rural children and children whose lives are relatively unchallenging to identify with. (I also think there's a place for an updated version of the escapism writers like Enid Blyton and Arthur Ransome provide.)

With the result that I wrote a children's adventure story called THE BRICKS IN THE CAVE and put it on a blog . . . but that wasn't why I dropped by to leave a comment . . .


. . . And I liked the idea of your house seeming to be on the verge of collapse under the weight of books. No-one we know has books in the way we do. We can hardly move for books. They are up the walls, up the stairs and across the floor. Sometimes we can't find places to put our feet.

Most of our neighbours live in tidy, bookless, houses and my mother thinks we have too many for the size of the house . . . we think this is the way to live and that the house is too small for the books . . .

I'm contacting people who list Green Politics as an interest on their 'blogger's profile'.

I have a new blog called

SHOUTING AT THE RADIO

It is concerned with the environment, building, architecture, politics and education.

It can be found at

It is in its very early stages just yet - so comments will be especially welcome!

. . . but I meant to say that your comments about Jaqueline Wilson made me warm to her too . . .

and this is the link to THE BRICKS IN THE CAVE, if you are interested.

Thanks for dropping by. I shall visit your blog as soon as I've put the boys to bed!