A few weeks ago I was given a copy of a history book about the Napoleonic wars called The War of Wars by Robert Harvey. Both the title and cover exuded an atmosphere of pipe smoke and testosterone and I could imagine retired colonels reading it with glee, revelling in the descriptions of canon fire and hand-to-hand fighting. War! 926 pages of it, to be precise. 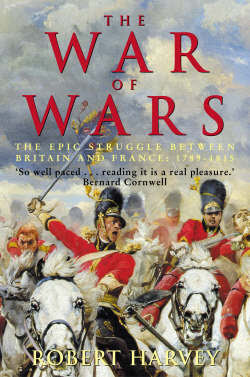 I put the book to one side, never really intending to read it, but something happened and one day I found myself reading the first chapter followed by the second, then the third until I realised I was hooked. I loved the author's sense of theatre. Napoleon is portrayed as a megalomaniac monster who makes Stalin seem quite moderate, whilst some of Britain's greatest military heroes come across as the vain, conceited, libidinous, flawed geniuses that they probably were. So many history books are dull - I should know, I was once a history undergraduate - so it was a great relief to come across a book by an author who knows how to entertain.

I particularly enjoyed his claim that in his final years, Napoleon suffered from a rare disease that made him gradually change sex. According to Harvey, this rumour is confirmed by the former emperor's 'hysterical behaviour'! Right on, Bob.

But beyond the theatrical narrative are some shocking statistics about the casualty rates of the many battles that took place, justifying Harvey's claim that the Napoleonic wars were a precursor for the First World War. I had no idea how many lives were lost and how the war effectively ended France's status as the major power in Europe(so it wasn't all bad). Particularly shocking was the description of the remnants of the French army struggling home after their failed invasion of Russia. In temperatures below -30, some soldiers cut their own fingers off to drink blood whilst others lay down in the snow to die, refusing any attempts to get them on their feet.

I was also appalled by the behaviour of both the English and French soldiers, who on certain occasions thought nothing of robbing a community of its entire possessions and raping anything that moved. With many eyewitness accounts of atrocities, it is grimly fascinating to read how war can brutalise ordinary men so quickly. The War of Wars may read like a gung-ho boys' book, but it doesn't gloss over any uncomfortable truths. The pointless waste of human life and energy denudes this era of its glamour and the overall impression is one of slaughter and destruction.
Posted by Steerforth at 8:54 pm