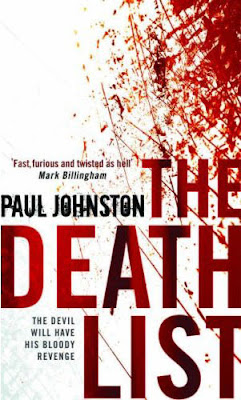 I don't read thrillers. I can't see the point in reading something that offers nothing more than a routine television drama. The best novels not only entertain the reader but also provide an insight into the human condition, whether they merely ratify your own view of the world or open you up to new possibilities. However, last week I decided to break the habit of a lifetime and read a proper thriller called The Death List by Paul Johnston.

It was almost exactly what I expected and confirmed all my prejudices about the genre, but there was one surprise: I couldn't put it down. The plot was implausible and the characters were superficial, but the author had placed his hero in such an appalling situation that I had to find out what happened next. I read the book in a day, refusing all offers of human contact until I had reached the end. Afterwards I felt dirty, as if had just eaten a bag of jam doughnuts.

What was particularly interesting about The Death List was the fact that the main character was an author who'd been dropped by his publisher. There were lots of bitchy comments about the publishing world and I wondered if this was connected to the fact the Paul Johnston is now with Mira - an imprint of Mills and Boon - rather than his old publisher Hodder and Stoughton.

I checked the reviews on Amazon. Some readers loved it but others thought the novel was 'implausible' and that the characters were 'two-dimensional', which is like complaining that there's too much fighting in a Bruce Lee film.

That should have been the end of it, but a few days later I found myself reading another thriller - this time by Simon Kernick. Like Paul Johnston's book it was impossible to put down and although I found the main character extremely annoying, I had to find out what happened next. By now I could see a clearly discernible pattern emerging in both thrillers, resembling a symphony in four movements:
And that's it. It's a story that has been told for thousands of years and will probably continue to be. Both books were good fun but I'm now aching for a decent novel. I have a pile of books on my bedside table but at this moment in time I fancy re-reading Orwell's Keep the Aspidistra Flying.
Posted by Steerforth at 8:27 pm