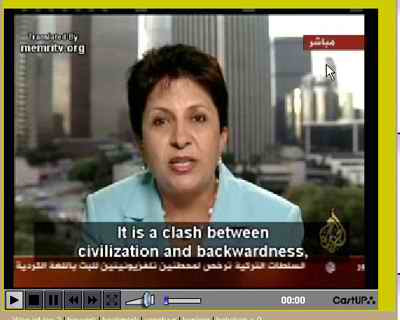 I discovered this Arabic television clip today featuring Wafa Sultan, an outspoken secularist. I don't agree with everything she says and she makes Melanie Phillips seem relatively tolerant, but in a week where a Saudi Arabian victim of a gang-rape has been sent to prison, it's good to hear a Muslim woman challenging the forces of bigotry. I just wish she'd done it in a slightly less bigoted way.

Then click on the picture below to hear the other side of the argument:

Posted by Steerforth at 4:29 pm

Gonçalo Veiga said...
This comment has been removed by the author.
7:37 pm

When I was there in London I stayed over a Lebanese person's house. She told me that in the mosques there in London they have inscriptions in Arabic saying that they should "kill Christians" and "smash the infidels".

Europe should start doing something about these people before they do the rest of us all, Christians, Buddhist, secular, atheists, whatever: religious freedom should be regulated with laws that would respect the Universal Principals of Man. What do you say?

I agree, but I'd also say that the Muslim world was, until recently, remarkable for its tolerance towards religious minorities and treated the Jews much better than their European counterparts. Today's Islamic extremists are very much a product of the West.

That doesn't mean that we should tolerate religious zealots. Anyone who feels comfortable with the idea of blowing up a busload of innocent people is morally bankrupt. But when you look at the backgrounds of suicide bombers, it's disturbing to see how normal they were.

I don't know what the answer is, but I suspect the combination of a more ethical foreign policy in the West and a resurgence of the traditional Muslim values of tolerance and enlightenment would help.

Yes, I do agree with you. The question that remains is: how will they ever do this? I mean, I've read my share on Islam (and the Q'ran) and I find it even scary that these people look at the world as us and then, to the extent we are kfirs (non-believers in Allah/God, therefore infidels) and as a solution we should be killed in His honour. Furthermore, as you know, they believe that they will be recompensated for this. It goes on endlessly towards madness, fear and possibly a religious genocide. I'm honest: I'm almost afraid of writing anything about Mohammed or Islam under my real name, as in a book, for the fear of a fatwa, because it is possible! I think governments should do something about this, like religious control, on all sides. But this has to be effective and it has to gather the support and envolvement of everyone. Non-muslims are too alienated though.

Have you read this book called "What's left?" by Nick Cohen? Quite interesting views on contemporanean leftism and Middle East policies.

I've also read parts of the Koran and gave up in despair, but the Old Testament is pretty depressing too.

And yet my limited experience of Muslim countries has always been a positive one.

I don't think the current conflict has anything to do with religion. I feel that this this is essentially part of a politico-economic conflict between the USA-led global consumer culture and its opponents. In South America many governments are looking to post-Marxist social democracy for their inspiration, but in the Muslim world religion is the rallying point.

I've found another part of the programme and added it, to show both sides of the argument. They're both very persuasive speakers. I agree with Wafa Sultan about the violent aspects of the Islam compared to other religions.

However, the man in the hat makes some good points about the West's hypocritical attitudes towards the Muslim world.

Well, again I agree with you when you say that "the man in the hat" (hehe) makes some good observations about what the West does to certain islamic/muslim majority countries, in terms of alliances. But it's tricky here again. First, has the West only "used" muslim nation insurging against communist threats? Or has it helped other countries as well? Why didn't he mention Japan? Only because they aren't muslim? And, on the other hand, weren't these people from Afghanistan, Iran and Iraq happy to be helped agaisnt a foreign threat? Weren't they fighting against a common enemy and all means (weapons and funds, mainly) an aid? I'm not profoundly fond on "the West" as they like to say, but, once they've rid themselves of their threat what have they done? They've imposed their regimes based on religion upon these countries. Fact.

Another interesting thing is when he mentions Andalusia, or Andaluzia, written correctly. Andaluzia is now Portugal and south of Spain. I live in former muslim soil now. Portugal has been a nation since 1147, with the conquest of Santarém and Lisbon from the moors. I don't like to call it ocupation because back then everything was still a turmoil. BUT, there were no slaughters here against muslims! Completely false! Portugal's first king, Afonso Henriques, even let muslims keep their faith. The treat with Rome (Pope) was the way he had to go in order for Spain and the other kingdoms in Europe to recognize Portugal as a nation and a legitim kingdom. There was religious freedom here. What truly happened was that the Roman Church then began to take over and they started building more churches here. And the population migrating from the north of Portugal (from where the kingdom of Portugal started its expasion) came down and settled here, increasing the number of Christians in the center and south regions. With time what happened was a slowly conversion of muslims into Christianity, for it was the recognized power in the region. But I don't think people minded. They never do: masses only want something to believe, to repel them from their mistakes and to lead or control them. It's in human nature. So, I can't agree with his second argument either.

I will have to agree with his statement that Arab/Muslim influence led to amazing discoveries in the fields of navigation, medicine, astonomy, mathematics, and other fields of knowledge. They were truly advanced in some of these areas and definitely they aided other nations in their advances, like in the case of the Portuguese Discoveries: thanks to their knowledge we used their triangle shapped sail in our boats, the Caravela, we used their navigation instruments and we even took their Arabic numeration (1,2,3...). But then again: what has the West taught them back? What have the Chinese during the Imperial age taught Mankind? Knowledge is around, it's mean to inspire men and be shared. I doubt the authors of major discoveries should consider themselves bigger than their ideas and knowledge. Ideas are free. From everything and everyone.

There are other things which make me revolted: like this matter of the Zionist regime. Are they aware that it were Palestinians who sold their land to the settling Jews? Are people in their ridiculous "Save Palestine" movements aware of this? What Jews (such a dangerous word to use nowadays, like Nick Cohen said) did and very wrongly, was to overuse their land control: they imposed a Zionist regime on the region. But it was the people of Palestine who were happy to make money out of selling their lands to them! What a paradox! Now they want them back? I don't agree with these building of walls between Palestians (?) and Jews in Israel, but it's not Jewish people who are blowing themselves up in buses and streets of Jerusalem. And I couldn't care less if it is an Holy City or not. They are all the madmen.

Anyway, what I really mean is: can these people, in the West and the East/Middle East ever start living according to the Principles of Respect, concern for Life, Love and mutual progress and reconciliation? The past is the past: both sides should stop seeing one as still living in the middle ages and the other side still acting as if beliefs from the middle ages still made sense.