Why Proust hasn't changed my life 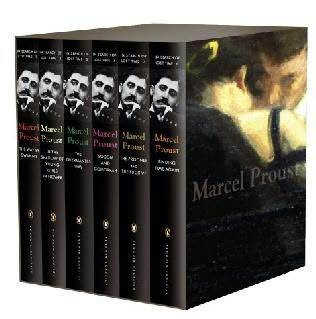 One of the first lessons I learned when running the Fiction section was that the sales of the first volume of Proust's magnum opus A La Recherche Du Temps Perdu exceeded the rest of the series put together. Indeed, I'm not sure if I can remember selling any of the other volumes. Knowing that the first book had evidently bored the arse off so many people put a bit of a dampener on things and even Alain de Botton's glowing endorsement wasn't enough to change my mind. But the other day I was chatting to a colleague in the unpacking room and he told me that although there were moments that were interminably dull (he compared the last book to a Ronnie Corbett monolgue), he was glad that he'd made the effort. I was almost convinced.

As a rule of thumb, the first volumes of novel sequences always sell at least twice as many copies as the remaining titles. The one exception to this is in the fantasy genre where, for better or worse, readers will happily buy every volume in the saga, particularly if the author's first name is Terry. It's very odd.

I suppose we should be grateful that the first volume of Proust sells. There are plenty of classic novels that never leave the shop and would slowly go yellow with age if we didn't replace them with newer copies. For example, nobody buys The Scarlet Letter. It may be a classic novel but I haven't sold a copy for as long as I can remember. I always insist on stocking it because I strongly believe that our credibility as a bookseller would be undermined if we didn't, but it belongs in the subgenre of novels that nobody reads. Titles in this category would include:

Cry the Beloved Country
The Ragged-Trousered Philanthropist
Barnaby Rudge
Franny and Zooey
The Magic Mountain
Mr Isherwood Changes Trains
The Red and Black
The Magus
The Bone People
The Rachel Papers
Burmese Days
The Leopard
The Ordeal of Gilbert Pinfold
Sons and Lovers
Romola
Room at the Top
One Day in the Life of Ivan Denisovitch
Lucky Jim
Howards End...

The list goes on. Sometimes I try to rescue these books and promote them locally in the shop. Once I was even lucky enough to be able to spearhead a national campaign for 'Forgotten Classics' and although the results didn't quite hit the bestseller charts, I like to think that I was instrumental in introducing some people to Revolutionary Road, Life with a Star and Journey by Moonlight. However I'm under no illusions. As someone pointed out in an article a few weeks ago, the sales of a Booker-shortlisted novel are always easily exceeded by specialist publications like Anglers' Weekly. Literary fiction is, it would seem, the real minority interest.
Posted by Steerforth at 10:06 pm

Well, that's awful. I can't say Proust changed my life, as I didn;t read him early enough. I only read the first one this year, and I LOVED it. And as it goes, I'm finding it rather hard to find a copy of the second volume! (I want the new translation.) My local second-hand bookseller had a lovely boxed Folio Society set, but at a time when I couldn't afford it, snip though it was...

As for these others, well, even more awful. I guess some, like theAlan Paton and even Salinger may simply be looking a bit dated now. Your Isherwood, Mr Norris Changes Trains, is a big favourite of mine (& God knows I used to love Franny & Zooey).

I also loved The Rachel Papers, The Magus and Howards End. These books did kind of change my life... (I also, aged 13, read the Scarlet Letter in one day and can even now remember finding it utterly fascinating.) (But I was weird.)

I should say in the interests of accuracy that the Folio Society Proust mentioned above was not the new trans., but that in my hankering I managed to overcome that obstacle.

If only I had some customers like you. However the outlook isn't completely grim: we have sold ten copies of Bel Ami from our staff favourites bay and have also successfully promoted authors like Heinrich Boll.

However our main claim to fame is that we sold more copies of Sharon Osbourne's autobiography than any other shop in SE England. And we're not even a big store!

We stuck The Leopard on our fiction table last year and sold 37 copies in a few months. Not bad for a small bookshop like us.

That damn Blogger! I didn't want to be 'info anon'.

Interestingly, according to an article in one of the weekend bestsellers, The Leopard (one of my favourite novels) topped the bestseller charts when it first appeared in Britain. The writer of the article made an unfavourable comparison with today's charts.

And I will keep the faith. Going through yesterday's sales I noticed that we'd sold 'Maurice' and 'Where Angels Fear to Tread' - both titles that we could have allowed our wonderful stock control system to disappear into the ether. There is hope.

I was trying to find the address of your bookshop (to try and sell you something, to be honest) but I couldn't find it anywhere on your blog. Nor could I find it when I Googled you.

I promise not to try and sell you anything in future but maybe you should promote your bookshop a little less discreetly - so YOU can sell to other people. Enjoyed your blog, BTW.

Like all superheroes I have to protect my true identity.

I've never read Proust, and I can honestly say that I probably never will.

The Scarlet Letter sells very well here in Salem, but that's because the author, Nathaniel Hawthorne, was born and raised here. That was one of the books we were forced to read in high school English class and I didn't really enjoy it. I've been meaning to read The House of the Seven Gables by Hawthorne, because the house that inspired it is a major tourist attraction in Salem (my sister used to work as a tour guide there.)

Ooh! How 'bout books that no one reads, except for English majors who choose to study obscure british novels (In America):

by the way, Hawthorne wrote The Scarlet Letter right here in my hometown. Which was his hometown.

Oh. I see my sister got here first...