There are times when I wish that I lived in 1907 instead of 2007. Naturally I would be a gentleman with a private income rather than some poor sod working down a coalmine and dying of emphysema in my mid-50s. That goes without saying. But what a life it would be, existing in a world without McDonalds, Big Brother, motorways, human resources, globalisation, mobile phones, Coldplay and CCTV. I wouldn't know that a devastating global conflict was only seven years away, so I could enjoy myself in blissful ignorance.

However if I'd been born 100 years earlier I wouldn't have seen this wonderful photo, released by NASA recently: 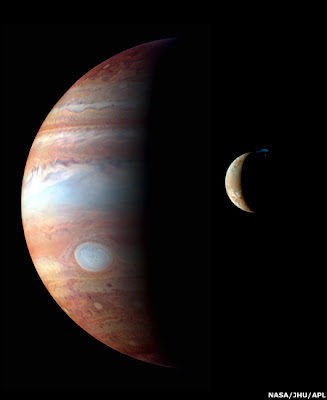 This amazing picture of Jupiter and its moon Io was taken earlier in the year by the New Horizons probe - a craft that was launched in January 2006 and is due to rendezvous with Pluto in 2015. What is so remarkable about the image, apart from its clarity and beauty, is the fact that a volcanic eruption is clearly visible on Io.

If you ever start to feel depressed about Iraq, global warming, gun crime and dumbing down, visit NASA's superb website to see what Mankind is capable of. There are some incredible images on the site, but one of my favourites is an audio file of the sounds recorded by the Cassini-Huygens probe as it descended to the surface of Saturn's moon Titan. To hear this astounding recording, click here.

Whilst we're on the subject of space, another really exciting development is the detection of planets outside our solar system. What was once a matter of conjecture is now a reality and in less than a couple of decades we have discovered nearly 250 planets. None of them appear to be capable of supporting life as we know it, but it is only a matter of time before the first Earth-type planet is discovered.
Posted by Steerforth at 6:20 pm

"I wouldn't know that a devastating global conflict was only seven years away, so I could enjoy myself in blissful ignorance."

To be fair, many people did think there was a major conflict on the horizon - certainly the socialist left, particularly in Europe, talked about the coming war.

However, there was a recent discussion (I think in the letters page of the LRB) where a similar sentiment had been made. Someone pointed out, that someone living 100 years ago would have known a devastating war - England's villages are littered with war memorials to WW1 and WW2. But there are many memorials to those who died in the Boer war.

My copy of Field Marshal Lord Carver's (who he?) history of the Boer War, lists British casualties of almost 21,000. 7000 Boer soldiers died, plus up to 20,000 deaths in the "concentration camps". He also quotes an estimate of up to 12,000 African deaths.

While nowhere as many as in the WW1, standing at the vantage point of 1907, you certainly would know mass military death. You would probably have heard about the slave trade. Certainly you would have seen the consequences of poverty.

While I think there is much of the 21st Century I would gladly miss (can I add Climate Change to your list?) I know that if I get disease, I may well be cured, I have more democratic rights then my contemporaries 100 years ago, and as you say, I can look at Nasa pictures on the internet.

Overall I think 1907 was better if you were rich, healthy, heterosexual, exempt from military service and white and male. That was probably part of the problem.

That's the thing. You've got to be wealthy enough to afford enough servants to ensure that there is always hot water for your bath, a fire in the grate, food in the pantry (and the table at the prescribed times). Uncomfortable clothes. What sort of toilet paper did rich people have in 1907? Did everyone have a sore arse all the time? What about dandruff? Certainly most people would have been having bad hair decades. Of course, when that twing turns into a *definite* toothache, things are going to get very unpleasant.