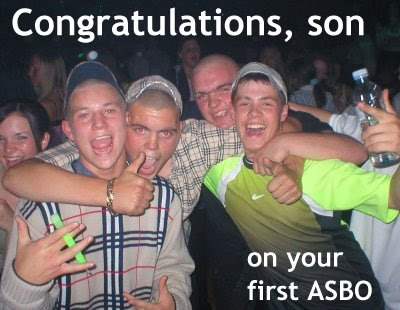 On Thursday afternoon my wife phoned me at work: 'Sorry to bother you but someone's just phoned from the court and you're down to do an ASBO tomorrow. They're sending over some documents by courier and you've got to study them tonight.' I could barely contain my glee. At last, something really juicy. Last week I was signing warrants and dealing with unpaid council tax, trying to appear interested but failing miserably. An Anti-Social Behaviour Order would at least give me the opportunity to use my brain.

I studied the documents as soon as I got home. The offender was 17 and his first recorded offence occurred four years earlier, when he was caught in possession of cannabis. Since then he had built up a depressingly long list of crimes including theft, burglary, assault and vandalism. I tried to keep an open mind, but after I'd read the witness statements I couldn't help thinking that he must be a nasty piece of work. He seemed to have no respect for authority and was completely out of control. An ASBO wouldn't stop him, but it would at least make it easier to give a custodial sentence next time he committed a crime.

The next morning I went to court with a very clear mental picture of what sort of person I'd be dealing with, but when the door to the courtroom opened I was taken aback. He looked no older than 13 and announced his name in a boy soprano voice. I had imagined a tough-looking character with an expression of contempt, but this boy simply looked bemused. His face showed no fear, anger or contempt and apart from an occasional nervous tic, it was hard to tell what was going on in his mind.

Before the terms of the ASBO were discussed we were given the boy's life history, which turned out to be one of the saddest things I'd ever heard. He had several siblings, all of whom were in care. He had been kicked out of his family home when he was fifteen and by all accounts, his parents (who didn't live together) were completely feckless. Since then he had lived either in hostels or with friends. He had stopped going to school several years earlier and he had the reading age of a five-year-old. He got into frequent trouble because he was part of a gang who, like him, were completely unemployable and had nothing to do except hang around and make a nuisance of themselves.

It was clear that this boy wasn't 'evil' or even just bad. He was a lost soul who had been appallingly neglected by both his family and society and in the absence of any love or discipline, he had drifted through life until he found a new family as part of his gang. As I listened to his tragic life history I wished that there was something I could do. What good would an ASBO do?

I retired with my colleagues and we were shortly joined by the legal advisor. We all felt the same - if only there was something we could do. This boy should be taught how to read properly and then be given the opportunity to learn a trade - something that would boost his self-esteem and give him opportunities. He also desperately needed an adult mentor who cared about him. How had he been allowed to slip through the net?

We decided that he needed the ASBO as his behaviour was out of control and he needed boundaries. We had reservations, but were assured that this was a preventive action rather than a punitive one. We were also reassured to discover that if he violates the conditions of the order he will, at last, find himself in 'the system'. If only he could have benefited from intervention at an earlier stage.

Getting help for children with special needs is extremely difficult. My wife fought tooth and nail to get support for our dyslexic son and when she finally succeeded the result was a dramatic improvement. If a middle-class graduate struggles to get assistance for her child, what hope does a poorly-educated person have, particularly one who has a low intelligence and/or a substance abuse problem? The authorities always cite funding as an issue, but compare the cost of helping a problem child to keeping an adult in prison. The current set-up is not only a false economy but also morally bankrupt.
Posted by Steerforth at 4:29 pm

But at least YOU ( in your position of authority) fully realise all this and can therefore bring your perception/understanding to cases like this.
Some folk ARE blinkered; they haven't a clue HOW some young folk have been " brought up", how these folk have already faced stuff that the " middleclassies" cannot even contemplate...

What a great post. It frustrates me so much that much of the middle class expects people in his position to use middle class remedies when they have no conception of the world through those eyes. Much like the politicians who say "I could survive on £50 pwk benefit" but not only have the luxury of going back to their real life afterwards, but also have the connections, education and social expectations and awareness to deal constructively with the situation.
Am so glad to hear you are in a position to see through their eyes a little.

A great post indeed. This is a very complex matter, especially when you have to decided whether you let this behavior continue or try and give the boy a chance, even if that means theaching him limits (in his head as well as towards his fellow Men) and a craft. How does that work over there? Is there a rehabilitation of these young kids, in the sense of qualifying them for the working market?

(still too early for me!)

It's so sad when the system fails those who could actually benefit from it. I hope this boy can turn his life around. Hopefully he's still young enough that his isn't a hopeless case. (BTW, I didn't know what an "ASBO" or a "hoodie" was until I saw an episode of Dr. Who which referenced "Happy Slapping Hoodies with ASBO's and ringtones." I had to do a bit of research to find out what happy slapping, ASBOs, and hoodies meant).

It's so frustrating isn't it? There are so many children being failed by their parents and the "system" that is supposed to be their safety net. My twins have special needs, and I too have had to push and fight for appropriate support for them. It's an ongoing battle, and at times I have cried with frustration.
There's a flip side to that too. Today we were at the Children's centre seeing a physiotherapist and she told me that there are a couple of children in my boys classes that she has noted need intervention. The teachers have approached the parents/guardians and they have not taken her up on her offer of assistance.
I stand in the playground and kids come over and chat to me (I have helped with reading so they all know me) and tell me stories that fill me with despair. There's a boy with ADHD whose mum has left him, he doesn't know his dad, his nan struggles to cope with him as he is much larger than average, he knows his mum is a drug addict, he knows the other kids are scared of him, he throws his weight around to take control. He's 9.
It's heartbreaking. I don't have any answers though, which feels even worse.