It's just like the Invasion of the Body Snatchers. Suddenly, friends and acquaintances - all intelligent people with impeccable taste - keep telling me that they've been to Centre Parcs for a break. Their explanations are so similar that it's quite sinister: 'Well I know it has a bit of a naff reputation, but actually it's very nice and great for families. You have your own chalet, no cars are allowed and you can hire bikes.' All said with a wide-eyed smile that makes me feel very nervous. Next it will be the bloody Alpha Course.

Worst of all my wife started to think that it might not be such a bad idea after all. There were, she was told, lots of people that my father-in-law irritatingly refers to as PLUs (People Like Us). I mentioned this to my mother-in-law, as I thought that she'd shudder in horror at the prospect but no, she'd heard good things about Centre Parcs too.

In a rare moment of humility, I conceded that I might be wrong. After all, I'd been wrong about Battlestar Galactica. How could I selfishly maintain my stand in the light of overwhelming support for Centre Parcs from just about everyone I knew? 'Go on then' I said one evening, 'Order the brochure and if it doesn't look too awful, I'll do it.'

Three days later a package landed on the doormat and we were delighted to see that it contained a DVD of the Centre Parcs experience. I poured a glass of wine and focused on keeping a positive frame of mind, but within seconds an inner voice screamed 'NO! DON'T MAKE ME GO THERE. IT'S AWFUL!'. The whole place looked like something out of Logan's Run - a manufactured utopia for the middle managers of middle England. Nice men called Steve who worked in Human Resources and their 2.4 children. I wish I could be happy like Steve and cycle through pleasant woodlands with my family before enjoying the vast fayre of international cuisine. Unlike Logan's Run, people aren't killed at the age of 30, but it is a form of death.

There was an awkward silence for a few minutes. Normally my wife and I love and hate the same things, but given the current Body Snatchers scenario, supposing she'd gone over to the other side? 'Oh no.' She suddenly said with conviction. 'We couldn't go there.' I felt a huge wave of relief and gratitude. I had begun to doubt my sanity. Perhaps I was just a lone misanthrope, bent on stopping my family having fun and subjecting them to my jaundiced views, rather than a sane rational individual who objected to the commoditisation of leisure. But no, my wife's instant revulsion (and she's a much nicer person than me) convinced me that all was not lost.

As for the friends, I'm still in a quandary. In every other respect they are beyond reproach. I can only conclude that something happened to them at Centre Parcs and if we go there it will happen to us to. Stay away, if you know what's good for you. 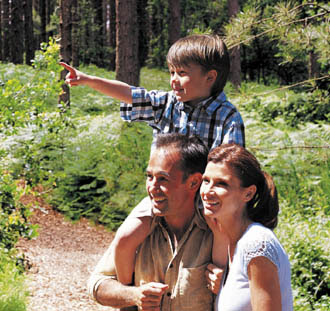 Posted by Steerforth at 5:02 pm