One man and a baby 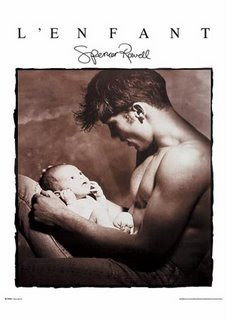 There are several golden rules of parenthood, but the most important one is that only the man is allowed to be ill. If I have a mild virus I think nothing of retiring to bed for three days, during which time I'll suffer from intimations of mortality and become emotional when I hear birdsong (Goodbye dear world). If you're a mother, you could have terminal cancer and still be expected to do the school run up until the last minute.

I was tempted to remind my wife of this rule two days ago when she limped home from school after sustaining a leg injury on a tree stump. When she revealed that it took place in a school playground, I told her that she was too old to do things like that and it was probably only a bruise, so here were some Ibruprofen tablets. The following morning she limped back to school (with a pushchair) and horrified the other mothers, who insisted that she should go to the local hospital. She did and was met by a nurse who told her that she needed at least two days in bed otherwise the wound could clot and gangrene could set in. Gangrene!

My wife phoned me at work, mentioned the G word. I rushed home, naturally. Since then I have been looking after my sons whilst my wife lies upstairs like the invalid woman in Secret Army (later parodied in 'Allo 'Allo) barking orders from above.

I have tried to be a new man like the father in the Athena poster, but have failed miserably. Although I am no stranger to cooking, changing nappies, bathing and 'creative play', I am totally useless at coping with the sheer unmitigated boredom of being with a small child all day. My youngest son is 16 months old and seems determined to die. Every minute he is either climbing something, trying to touch a hot oven, eating unsuitable objects or pulling the lid of the piano down on his fingers.

If I had to do this every day I would probably become an alcoholic - I have certainly never craved alcohol as early in the day as today, when I opened a bottle of wine at teatime. Meanwhile my wife has had a wonderful time lying in bed, reading a book for the first time in ages. Good for her (but I hope she gets better soon).

I spend a lot of time with my sons, but it's always for a few hours at a time. I have been spared the relentless tedium of having to care for a child from morning until night, dressing, feeding, bathing, playing and nursing them. It's not all grim. He is a very sweet child with a great sense of fun, but I rarely feel equal to the task and struggle through the day. I am not the Athena man.

As for the Athena poster, I've read that the man who conceived it died of AIDS. The photographer made so much money that he went off the edge and became a drug addict whilst the male model claims to have slept with over 3000 women. The baby received a paltry £32 for his efforts and is now a very normal teenager in Cyprus.
Posted by Steerforth at 7:42 pm

Oh the stories I could tell. Pushing a buggy laden with two toddlers to the doctors, in a freezing fog, because one of them had an ear infection - crying all the way there, because I felt so ill & exhausted myself - and then never mentioning it to the doctor! (And ending up with a bad chest infection two days later, & calling the doctor out.)

I had a friend who told of literally clinging to her husband's jacket and pleading with him not to go to work, because she felt so ill - she had one kid and was pregnant with the next (and now has four!), but he went anyway - "I have to" - and then she collapsed and was diagnosed with pneumonia.

Another mother on the playgroup circuit was walking around with pleurisy.

You just do what you have to do, don't you! And it's dangerous, because you get out of the habit of "listening to your body," which is how I've ended up with ten-year-old gallstones! ("Oh, it's just pain. It'll pass. Have you done your homework?")

Anyway, Steerforth, well done! I always found chasing toddlers around very exciting - but the highlight of my day for some period was the moment when they went into the bath, and I sat on the folded-down toilet seat lid with a drink. Martini and ice. Lovely.

Hee! So true! And sadly I recognise the absolute need for alcohol early in the evening too...twins can do that to a woman y'know.
Funny isn't it how quickly we dismiss our spouses ailments; my husband told me last night that he had tight feelings in his chest and thought he may be about to have a heart attack, it didn't concern me for even a second, I just said "Wind" and walked away.

I wish your wife a speedy recovery.

Thanks for your comments.

Ms Baroque - you're quite right about how attuned we become to our children's health, at the expense of our own (or indeed our partner's). I love the image of you sitting on the loo with a Martini and ice.

The people I feel really sorry for are single mothers (or fathers) with no family or support network around them. What do they do when they're too ill to stand up?

Sara, I have nothing but the deepest respect for anyone who has twins. When I have a bad time with my youngest I can at least take comfort in the fact that there's only one of him!

I am escaping the relentless tedium of small children by visiting your blog and this post has cheered me up no end! (Sorry if that sounds bad but I like to hear that other people find these things as challenging as I do.) I had to get my partner to take a day off work a few weeks ago and it was done so grudgingly it was pathetic. I stayed in bed and secretly enjoyed myself even though I was very ill! I personally think that to stay sane you need to be out of the house as much as possible.

Yes, I did that today and went to a soft play area where I could read The Independent, albeit in seven-second chunks punctuated by checking to see that my son hadn't escaped (he did that a few weeks ago in a supposedly baby-proof zone)

Meanwhile, you're sooo right in that "only the man has the right to be sick" issue! It's so familiar to me too! haha

It must be part of the male brotherhood!

We ARE the weaker sex!

Message to your partner:

Get well soon. But don't tell HIM!