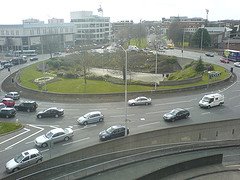 Remember that rounabout in the opening sequence of The Office? I used to drive round it every day on the way to the most soul-destroying job I've ever experienced - running a bookshop in Slough. The Slough branch of Ottakar's has seen more managers than Italy has changed prime ministers and at 17 months, I think I qualified as one of the longest serving. It may not sound a long time in the great scheme of things, but that 17 months felt like a life sentence and every day it was a challenge to remain positive in the face of overwhelming odds. Particularly as I had every reason to believe that I would be in Slough for years.

What was wrong with Slough? Apart from the local population, who were less than endearing, the worst aspect of Slough was the sheer ugliness of the buildings. It felt as if some local by-law had been passed outlawing nature and I often found it hard to tell what season it was unless the weather was particularly extreme. Where I worked they had even outlawed the weather, entombing us in a cavernous, dimly-lit shopping centre whose main clientele consisted of gangs and bewildered-looking illegal immigrants who must have been regreting their decision to come to Britain. The only sign of nature was by my goods-in entrance where a tiny seed had taken root, fed by drips from the outflow pipe of our air-conditioning.

One night I had a particularly vivid dream that I was in Chile - a place I had never been to. The ground was covered in purple blossom which formed a stunning contrast with the deep orange sky of the setting sun. I don't normally pay any attention to dreams, but when I woke up I couldn't get the images out of my head. An hour later I was crawling along a very congested M25. It was a grey, drizzly, mid-February morning and the sight of concrete and traffic formed a stark contrast to my colourful dream. Something inside me snapped and I realised that I couldn't do this any more. When I got to work I picked up the phone, got my credit card out and booked a flight to Santiago. 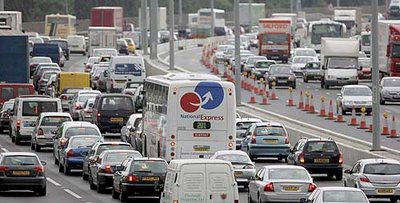 Two weeks later I was on the other side of the world. It was late summer in Chile and although I never saw orange skies and purple blossom, I did see a lot of beautiful and strange things. Some landscapes had a dream-like quality about them, juxtaposing the familiar and the unusual. For example I remember going past a field that could have been in Devon. It had lush green grass, friesian cows and brambly hedgerows, but in the background there was a huge, snow-capped volcano.

I began my trip in Santiago, but after a couple of days took a train to the south of the country. After a long, overnight journey in a rackety old diesel I arrived at the Hotel Continental in Temuco. I knew nothing about the hotel and didn't have great expectations, but it turned out to be one of the most beautiful hotels I have ever visited, with a faded grandeur that made me feel as if I had travelled back in time to France in the 1920s. However the biggest surprise was discovering that my room used to be regularly occupied by Pablo Neruda. Here's a photo I took at the time. 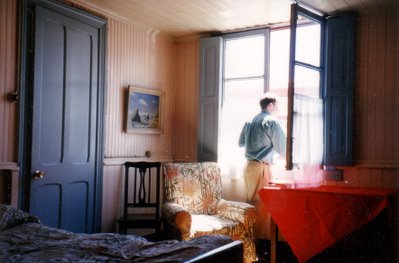 Chile seemed like a polar opposite to Slough. The country was beautiful, the people were nice and every day felt like a gift. Going there was an act of financial recklessness but it restored my sanity and made Slough bearable. Rarely a day goes past without me thinking about Chile and I have no doubt that one day I will return there.


Ask me where I have been
and I'll tell you: 'Things keep on happening.'
I must talk of the rubble that darkens the stones;
of the river's duration, destroying itslef;
I know only the things that the birds have abandoned,
or the ocean behind me, or my sorrowing sister.
Why the distinctions of place? Why should day
follow day? Why must the blackness
of nightime collect in our mouths. Why the dead?

Pablo Neruda
Posted by Steerforth at 11:09 am

That's so inspiring. Those adventure moments when you remember that the whole planet is your home, not just a little, albeit pretty or otherwise, square mile or two, are so important. My best friend had a Neruda poem at her wedding and will be very interested to hear you slept in the same room.
The older I get the more convinced I am that the things you regret are the things you didn't do.