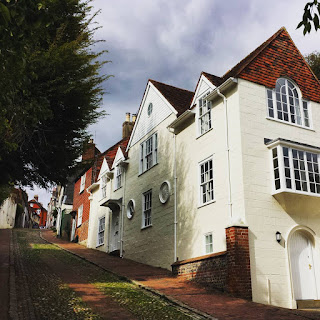 During the summer I became quite discontented with my house (sadly not the one above), which felt smaller and noisier than ever. Outside, builders shouted, drilled and listened to hideous power ballads. Inside, my wife, sons and cats occupied every room except the main bedroom.

At one point I started viewing property websites and looked longingly at houses with spacious kitchens and gardens larger than a bath mat. Many of them had a study and a shed - catnip for a middle aged man - plus the en suite bathroom that my wife has yearned for all these years.

To add to the temptation, the houses weren't selling for any more money than the value of our home. If we could buy one of these houses (and somehow lose our cats during the move), how much better life could be. I could have that book-lined study I'd always dreamed about.

But the bubble always burst when I clicked on the maps and realised that there is a simple rule to purchasing a property in this area: unless you're blessed with a large sum of money, you can either have a small house in a good location, or a large home in a less desirable one. Invariably, whenever I saw a house I liked, there was a catch.

Also, many of the larger houses I saw conformed to Patrick Hamilton's snobbish but amusing description in a book I'm reading at the moment, Mr Stimpson and Mr Gorse:

'The houses were squat, two-storied affairs. Their fronts had all been most oddly treated. It looked as if the builder had had some sort of infantile sea-mania for shingled beaches, and that, to indulge this passion, he had, having covered the external walls with thick glue, used some extraordinary machine with which to spray them densely with small pebbles.

In the front gardens of most of these houses there were, in addition to sundials, countless images of Gnomes, Dwarfs, Fairies, Goblins, and Peter Pans - the inhabitants of Sispara Road having, it seemed, a strong turn of mind for the whimiscal, the grotesque and the beautiful.'


So for the time being, I am staying put in the unpebbledashed, gnome-free streets of Lewes, resigned to living in a terraced Victorian shoebox, but grateful to live in a town that is full of delights, with solid, unpretentious housing. 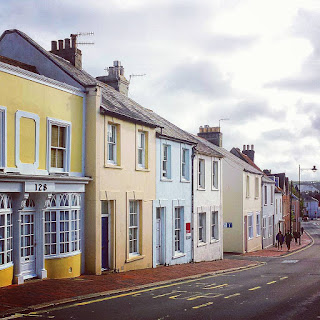 In a vague attempt to improve my fitness and leave my cramped surroundings behind, I've been going on long walks around Lewes. I have a particularly good pair of shoes that were originally designed for postmen (if you look carefully, you can see 'Royal Mail' embossed on the side) and they enable me to stride around the town at a speed that burns off a few calories and gets the heart racing.

The other day I explored the ruins of the Priory of St Pancras, which was built roughly 940 years ago: 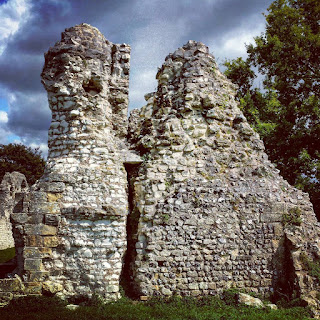 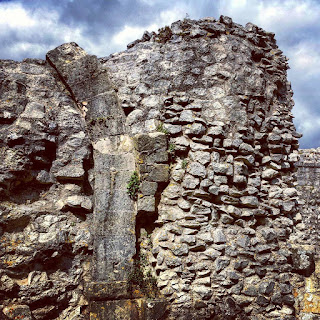 There's nothing like a good ruin to put things into perspective, whether it's a Norman priory in Sussex or a deserted office block in Detroit. Ruins are humbling, or should be.

Last night, the Priory of St Pancras looked particularly beautiful as volunteers had lit over a thousand candles, all strategically placed either on the ground or in the nooks of the stone walls. It was quite magical. 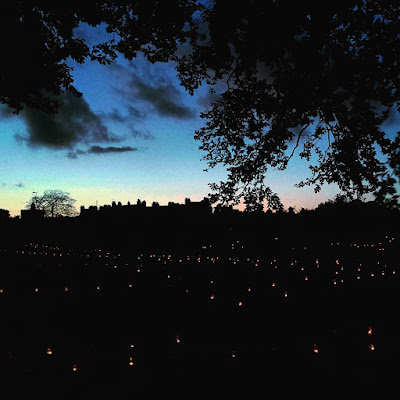 (My only reservation was over the decision to lay a double row of lights, as it looked like one of those makeshift landing strips that feature in war films. When, at one point, I heard the drone of a light aircraft, I was worried that its confused pilot was about to make a descent. But that aside, it was a magical evening.) 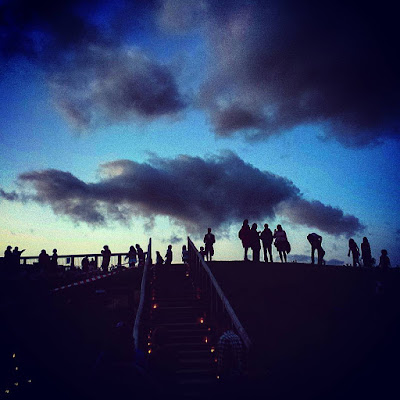 As the sun set, a choir started singing Carmina Burana and I felt incredibly grateful that I lived in a town that did things like this. If my pokey, Victorian terraced house was the price that I had to pay for living in Lewes, it was probably one worth paying.

Also, at a time when so many people around the world have been displaced from their homes, it seemed absurd to be complaining about something so self-indulgent and trivial.

But when the car exhausts and builders' hammers get too much, I can faintly hear the quiet call of the garden gnomes whispering "Shed, conservatory, en suite bathroom, study, parking space, large kitchen, guest bedroom..." and a part of me weakens.


P.S - In response to Joan's comment, I have a very short video clip of the choir, which I've added. I didn't bother trying to film anything in the dark, but I hope this captures something of the evening's magic. Oh, and did I add that it was all free?

Posted by Steerforth at 6:43 pm

I first moved into my present house 43 years ago. I say 'first' because after 11 years we moved away, only to return 4 years later. I've now been back here 28 years and would probably find it difficult to settle anywhere else due to the fact that I need the familiar around me. However, at times I feel I only continue to live here because it's a link to my youth, and think about what it would be like to move. Then I sort of panic at the idea of living in a house in which I have no history and shudder at the thought. (And yet - and yet...)

Kid - It can feel a little like "Damned if you do, damned if you don't". But what you're doing is simply living the way most people lived in the past, before the phrases 'property ladder' and 'lifestyle' entered the vocabulary. When I was a young boy, most of my neighbours had lived in our street since the 1930s.

However, if you're curious about the experience living somewhere else, I suppose house-sitting could be a good way of exploring that.

I just want to find somewhere quieter, where I don't have to keep half of my possessions in boxes in the loft. If I ever found that place, I'd stay put. But if I had to stay here, it wouldn't be the end of the world.

Wasn't there some research done last year which concluded that the British live in the smallest houses in Europe? (No wonder they spend so much of their income on exiting to pubs and holidays.)

It is sometimes possible to find a reasonablypriced larger house in a desirable location if it is very much in need of a reno. But as you don't like builders' noise or disruption, I dare say that's not a solution for the Steerforths either.

You sent me off wondering what St Pancras actually did, so Wikipedia was my friend and it was quite saddening. A bolshy "you're not the boss of me" teenage boy who refused to do as emperor Diocletian asked and got terminally shortened as a punishment.

However, he is now "popularly venerated as the patron saint of children, jobs and health. His name is also invoked against cramps, false witnesses, headaches and perjury." As you are living in a cramped situation, with children, and worry about your job, St Pancras sounds just the champion for you. Hope any prayers you sent up at his candle event will be answered!

Thing is, I've lived in 7 houses in my lifetime (if you count the one in which I've lived twice as two), so I know what it's like to live 'somewhere else'. It's not so much that I WANT to live elsewhere, it's just that - sometimes - the old place just doesn't seem the same anymore. Although, if I DID move, I know I'd miss the house and regret having abandoned it. (And yet - and yet...)

Dale - Yes, it's a real problem and I think the postwar houses compare very unfavourably with their Victorian predecessors. Why, in the age of radio and television, were builders allowed to get away with paper thin walls? The answer, I think is a narrow but spacious three-four storey Georgian-style terrace, with additional insulation against heat loss and noise.

Doing up a wreck appeals in some ways, but even they cost an arm and a leg around here.

As far as prayers to St Pancras are concerned, I wish that I could believe in these things. Sometimes I agree with the religious figure who said that Hell wasn't fire and brimstone, but simply an absence of faith.

Kid - I suppose that even though the house remains the same, everything else is in flux, including yourself.

The candlelight event at St. Pancras looks beautiful. I wish I could have heard the singing.

Does anyone live in the perfect place? I think you know I hate Philadelphia, but it's close to the family I hardly ever see anyway. I've thought about moving back to my beloved New England, but then my family would be 6 to 8 hours by car. Now they're all within 2 hours. But the city is noisy and dirty and violent and has no public transportation except buses. I live in a nice neighborhood, and by that I mean that most of the people are nice, but a young man at a concert was shot to death about four blocks from us. This happens on average about every other year in my neighborhood. But it's mostly the lack of efficiency and culture and appreciation of the unique that drives me mad.

I hope you find an affordable house that meets all your criteria.

It's a huge pity that such a historic city as Philadelphia has ended up the way it has. From what you say, I can't help feeling that if you don't see much of the family anyway, you should just move somewhere that's right for you. If it's a nice town in New England, I'd imagine that other people would be happy making the journey to come and see you.

Wow, thanks for adding the clip. It gave me chills!

Great post. Keep looking. I was lucky to marry someone with a nose for interesting spaces. When we finally bought a modest house in our '40's, the furniture from our tiny apartment looked pitiful in it.

Listen to the gnomes! I know someone who lives in Lewes in one of those pebble-dash houses. I'm now living at the top of a Victorian house that hasn't been done up for years. I didn't know I had a secret 70s bedsit fantasy... Very happy. Lovely views.

It might just be better to remember how ghastly moving house really is !

Brett - Better that way than cluttered.

Zoe - It's a quirky, interesting house. Everyone loves it, but...

S&S - Very true. I did swear I'd never do it again after our last move.

Personally I loathe en-suites. Butchers of bedrooms and slayers of romance. There is a reason that bathrooms should always be separate. And at least you have sons, so the queue for it in the morning shouldn't be too bad.