Perhaps it's the male menopause, if such a thing exists, but the other day I did something I thought I'd never do. I'd learned about it almost by accident and was told that I would find the house down a small dark alley where, if I knocked on the right door, I would be shown upstairs to a room where a woman called Marcia would entertain me.

It was my first clavichord recital. 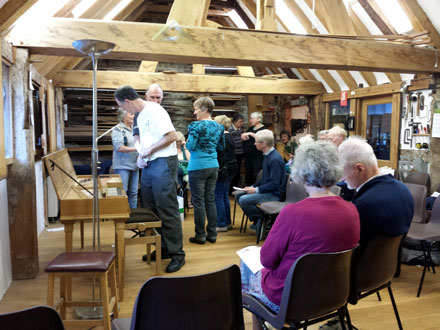 The clandestine recital took place in a small medieval building. By day, it houses a workshop, where harpsichords and replicas of other early keyboard instruments are built.

I'd seen some of the instruments a couple of weeks earlier at an open day and was speechless with admiration at their perfection. Every detail, right down to the creation of the metal strings, reflected a painstaking process that required a rare marriage of artistic and technical acumen. When someone mentioned that they occasionally held recitals, I had to go.

The soloist was an elegant, refined woman called Marcia Hadjimarkos, who introduced the pieces she was playing and talked a little about the instrument. "I don't know how you feel about clapping, but perhaps you'd just like to wave your programmes in between pieces and clap at the end. If you feel like clapping." And we did exactly that, with a ripple of muted, embarrassed laughter.

If I'd started filming in the middle of the recital, things might have turned ugly, so here's a clip of Marcia Hadjimarcos playing the fortepiano, with an introduction in French.

It's an odd instrument, with a lid, or swell, that keeps opening and closing. At one point I expected Sooty to appear.


Unlike the fortepiano, the clavichord doesn't have any pedals and it was extraordinary to hear the soloist produce such a wide dynamic range. A vibrato effect was created by wobbling the finger on the key, while pianissimo was achieved by an extreme delicacy of touch.

In the interval, I was fortunate enough to meet the woman who built the clavichord and she kindly responded to my inane questions with patience and charm. I hope I didn't come across as a complete idiot.

As for the music, it took a little while to learn to listen properly, but once I was in the 'zone' (partly thanks to a glass of wine in the interval), I found the recital increasingly rewarding. Listening to Bach's French Suites, with their extraordinary, almost electronic timbre, was a revelation. By the time I heard the exquisite encore, I was a convert.

There's something quite magical about an intimate recital in a medieval building, listening to music as it would have been heard three centuries ago. The phrase 'early music' used to bring me out in a cold sweat, but now I can see what I've been missing. Better late than never.
Posted by Steerforth at 10:35 am

you s*d now I'm seeing sooty peeking out and waving every time the lid opens..and I'm chuckling to myself (my husband who is both musical and a decent organ/piano/horn player is just looking at me ...and I don't think he's thinking complimentary thoughts)..but you've made me laugh and now a smile is stuck on my face.. the music was very pleasant to listen to as well Thank you

Val - I'm glad it amused you too. I sometimes wish my mind didn't work like that, as I tend to get the giggles at inappropriate moments (e.g funerals).

I actually like early music, but in small doses.

This class of instrument is a bit short on the sostenuto, and makes me feel, to quote Dodie Smith, as though I were being repeatedly hit on the head with a teaspoon.

Dale - That reminds me of Sir Thomas Beecham's description of the harpsichord: "Like two skeletons copulating on a corrugated metal roof."

I once had a boyfriend who built a harpsichord but I've ever seen a fortepiano before. Isn't humankind ingenious?

Your boyfriend wasn't called Malcolm, by any chance?

The fortepiano - who knew?!

My classical guitar teacher is also a period instrumentalist. She teaches lute, as well, and I have been flirting with the idea of spending the money on one of the things. I think you hit on something really important here: music is the closest thing to time-travel we have. When I pull out "Packington's Pound," even though I am playing it on a modern instrument, I truly feel transported. The step into the clavichord or the pianoforte (or the lute) brings one even closer to an evening in a Renaissance conservatory...