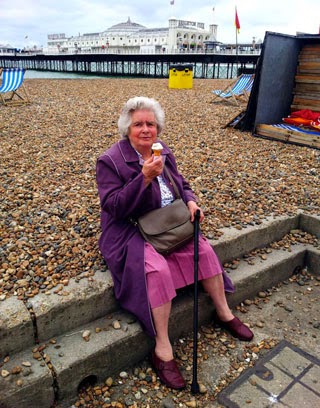 My mother had a fall last week, so I've been spending a lot of time at her flat. Sometimes I feel like Alan Bennett with his mother, trying to make sense of the stream of consciousness that pours from her lips:

"Pat's been to the hospital again. It's DVD this time. If it was Val you'd never hear the last of it. Those chrysanthemums have lasted haven't they. I can feel a draught. Mind you, I water them more than Louise does, but not too much. Do you want a biscuit? They're nice. I just have two, but Sheila's diabetic and she eats a whole packet..."

Today, the highlight was the abusive behaviour of one of her neighbours, who keeps shouting at the Albanian builders who are half-heartedly decorating their flats:

"Joe's been awful. Julia said that he shouted a word at them that's even worse than the F word. I didn't know there was one. Did you?"

I made a noise behind my Rich Tea biscuit that could have meant yes or no.

"I asked Daphne if she knew of a worse word than the F word and she said she didn't know there was one either. There's no need for it. Any rate, the doctor says he won't see him again. The reminds me, you gave me a cooking apple yesterday."
I listen and after years of practice, know exactly what my mother is talking about.

Sometimes she drives me mad, particularly her morbid obsession with other people's ill health. But I live in dread of the day when a particular phone call comes.
Posted by Steerforth at 9:29 pm

I hope that particular 'phone call doesn't come for a very long time indeed. Hope she recovers from her fall soon.

I think one of life's most difficult challenges is dealing with the fact that your parents (who always cared for you) can no longer even care for themselves. Hard as it is to deal with, it sounds as if you are being an exemplary son in every way. Sending love and hugs to you and yours, xoxoxo

A gentle smile of recognition :-)

Thank you all. I've stupidly misplaced my laptop power lead for the last few days, so please forgive them single reply. I struggle to type on this phone, which is designed for smaller fingers than mine.

Yes. I know exactly the feeling