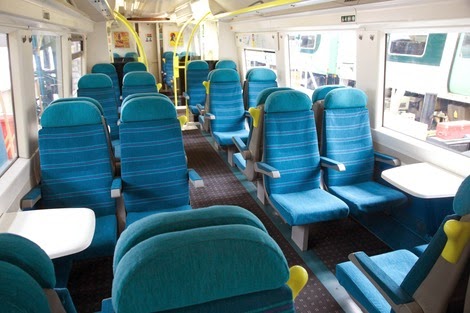 My train from Victoria to Lewes broke down at Haywards Heath this afternoon. After 15 minutes of failed attempts, we were warned of "special procedures" that would cause the lights and doors to stop working for a few seconds.

Reading between the lines, I realised that they were doing what the rest of us do when something doesn't work. They turned the train off, counted to five and turned it on again. It worked.

Once the train had rebooted, the doors hissed open and allowed the remaining people on the platform to get on. One of them was a rather plain, overweight woman in her late 30s. She was unremarkable in every way, apart from a fully tattooed face, a bright yellow bobble hat and a Modrianesque poncho.

Nobody seemed to bat an eyelid.

I was returning from a trip to the Science Museum with my younger son, who wanted to learn about materials and pollution. We looked at several exhibits that showed how many things come from oil, including airfix kits and bath tubs. When I answered any questions, I made sure that there were no adults within earshot who could hear my half-baked ideas. 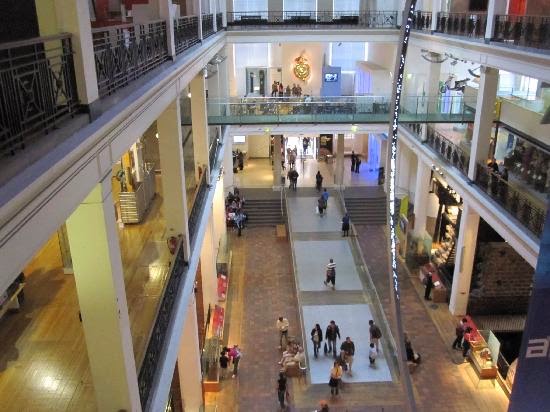 My older son also has an occasional interest in science. Yesterday he saw a YouTube video which claimed that if you shook a cola bottle vigorously, then put it in the freezer for three hours and 15 minutes, you would have fizzy iced cola. Three hours and 30 minutes later, I heard a voice shout "Dad! Dad!"

I had no idea that an exploding bottle of Coca Cola could cover such a large area. Both the floor and ceiling were soaked in cola, plus half of the walls, a computer, three chairs, a watercolour painting, a window, several books and a printer. The ceiling still bears the stains, but they add a pleasingly antique, mottled effect to the Victorian plasterwork.

After the long clean-up operation, I asked my son why he hadn't opened the bottle in the garden. I was assured that the experiment had worked perfectly in the video. Ah yes, I thought, the infallible wisdom of YouTube.

But perhaps I can employ this blind faith to my own ends. If I can write a list of all the things that annoy me (like beginning sentences with "So...") and make videos that convince today's teenagers that these practices will result in terrible consequences, I will have made up for the Coca Cola incident.

My first video will be about tattooed faces.
Posted by Steerforth at 7:04 pm

Oops! Hee hee. So as a person who sometimes likes to begin sentences with the word "So", shall I quit commenting? I hope not, because I look forward to your replies! :0) xoxox

Well (or should that be So?), I only object to it because it's a virus that suddenly appeared here from nowhere just over a year ago. Suddenly, everyone's doing it and I feel like I'm in Invasion of the Body Snatchers - people all look the same, but something is different.

It was the same with the questioning intonation, which thankfully disappeared again (with the exception of teenage girls) and "Blah-di-blah", which came and went around ten years ago.

Perhaps I'm just being grumpy because I'm not part of the in-crowd, or the so-crowd.

I remember taking my kids to the Science Museum for the first time as it had been a magic place for me as a child. They were a bit sniffy about the exhibit that comprised a door that opened when you walked towards it.

Rog - Amazingly, that door was still there when I worked at the Science Museum in 1999! Automatic doors must have been the norm for at least two decades by then. Sadly, my favourite exhibit (the night and day models) of the late 60s/early 70s was long gone.

Another cracking exhibit that was there in 1999 was a shrunken head - smaller than my fist. That seems to have been removed in the name of political correctness and good taste. Pity.

I don't know why but this day made me laugh out loud. As I just woke up (Tasmania time) I was a bit morning grumpy and read this and made my day. So funny the things people do in a day. I especially liked the part of rebooting the train. Why not? ha ha

Come to New Zealand if you fancy seeing tattooed faces. Faces (and other body parts) tattoed with the symbolic patterns of lineage and tribal affiliation were the norm amongst Maori tribes during classical times and are by no means uncommon today, as a conscious revival.

In the last 20 years it has become a sign of serious commitment to one's heritage for Maori women to adopt the lip and chin tattoos, known as moko. One of my Maori cousins has large tribal tattoos, but on her legs only.

Full face tribal tattoos for Maori men are less common and have a tendency to be adopted by political activists and criminal gang members, but not exclusively so, of course. Google image "tattooed Maori faces" to see some examples.

Ngahuia who wrote this article for the BBC is a university lecturer, and is the grey haired lady in the photo with a moko:
http://www.bbc.com/news/magazine-19628418

By the way, anyone who has ever made ginger beer is well aware of the acreage an exploding bottle can cover! That's why you always brew it in the garage.

Pam - I'm glad I made you laugh. I love the fact that we can type a few words and have an impact halfway across the world. I hope you had a good day in the end.

Dale - Perhaps she was from New Zealand, as it was a Maori-style tattoo and she had a backpack. She looked completely European, but there are lots of people who call themselves Maori, Aboriginal or Native American whilst looking like they hail from Leamington Spa.

In 2005 we were in Cambridge for the festival. One afternoon we walked into town and found ourselves in a pretty run down area. We entered s shop to ask for directions and there was a woman at the counter, in front of us. She eventually turned to leave, and revealed a face with more piercings than would seem possible. I wasn't really shocked, but for days I couldn't stop wondering why a person would hang so much metal on their face. As for the Science Museum, I've been a couple of times. Once on a school trip, and once as an adult. I'm afraid both visits left me rather cold.

Without wishing to cast aspersions on your no doubt brilliant knowledge of science, your comment about answering your son's questions in the Science Museum reminded me of this Australian advertisement persuading parents to get their children internet at home:

I love it, because I was usually as useful as a source of information as the father depicted in it.

I'm definitely not part of the in crowd, Steerforth, nor have I ever been. I think I've been out of step with the rest of the world since the day I was born. However, I am beginning to get used to it!

Hope you're experiencing some truly lovely spring weather. I think we all feel more cheerful when the sun shines, even if only for a few minutes at a time.

Martin - I can't help feeling that excessive piercings or tattoos are a form of aggression, but that's probably just my prejuduce. I'm probably too far at the other end of the spectrum - I don't even wear a wedding ring.

I'm sorry the Science Museum left you cold. I have mixed feelings about it, but I love seeing historic machines like Stephenson's 'Rocket'.

Zoe - That man is me. It's a wonderful advert. Did you post it on your blog at some point in the past? I've seen it before.

I don't mind bluffing to an eight-year-old, but when I worked at the Science Museum I ended up reluctantly appearing on BBC radio as a science expert. That was a complete farce. Thankfully, nobody I knew heard it.

Carol - It's t-shirt weather at the moment - a really glorious day. I think everyone feels better for it.

The 'So...' thing was probably ordained by the same mysterious higher authority that told everybody you meet in shops, pubs and restaurants to say, 'You all right there?' It's civilised enough, but mechanical...I'm tempted to say, 'Well I will be when I've got my pint,' or whatever, but that's churlish.

Mike - A variation on that is "How are you guys doing?", which makes me feeling like erupting in a Disgusted, Tunbridge Wells manner, except that I know that they're just a product of their time, like me, and I'd be a cantankerous, uptight old git.

Thanks Telos - I'm glad that the teddy bear cheered you up. I still don't know what it was doing in a tree in the middle of nowhere - a complete mystery!

You are not alone in disliking the trend for beginning sentences with "so". This Guardian article covers the topic rather well

I agree with him that it's something to with self-packaging, marketing yourself as a commodity with brand-defined responses to questions