My oldest son's favourite new word is hypocrite and it's usually levelled at me. Most of the time he's confusing flexibility with double standards, but sometimes he's spot on. I was a complete hypocrite last week, when I took my sons to a 'drive-thru' McDonalds, after years of condemning the company's food and working practices, but I knew that they'd love it.

On the way back to Lewes, my younger son said that he felt sick and I pulled over into a side road,  where we found ourselves next to a church in a small hamlet.

There are quite a few churches in England that sit in isolated places and don't appear to serve any community. Some villages never recovered from the Black Death, whilst others simply withered over time.

We got out and walked around, hoping that fresh air would help my son. On a nearby tree, we found this:

It reminded me of the film The Longest Day. I've no idea why the teddy bear was caught in a tree.

The church, surrounded by daffodils, recalled the rural idyll that appeared on my parents' 'This England' calendars. But as we approached the church, we found something rather unpleasant:

Once we were back in Lewes, I began sifting through boxes of secondhand books. I rarely find old photographs since I became self-employed, so I was delighted when I found these: 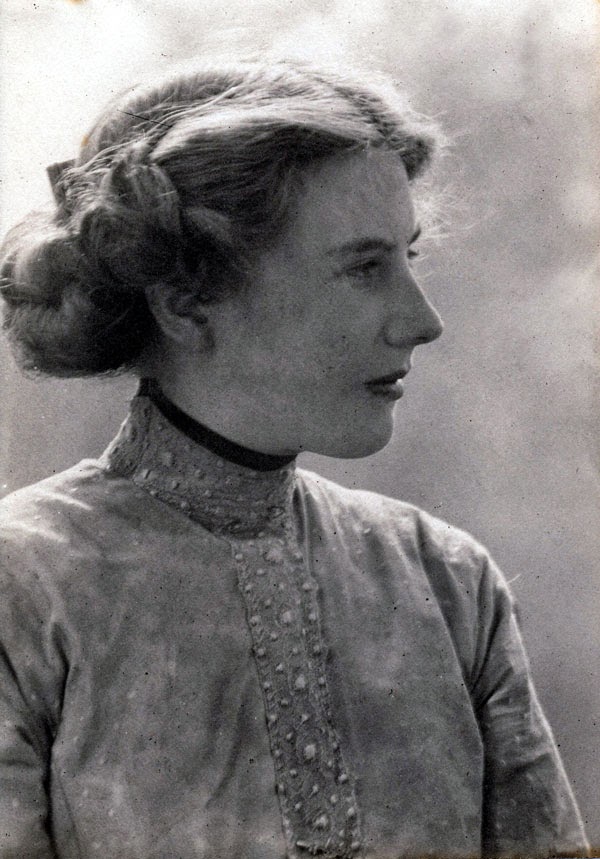 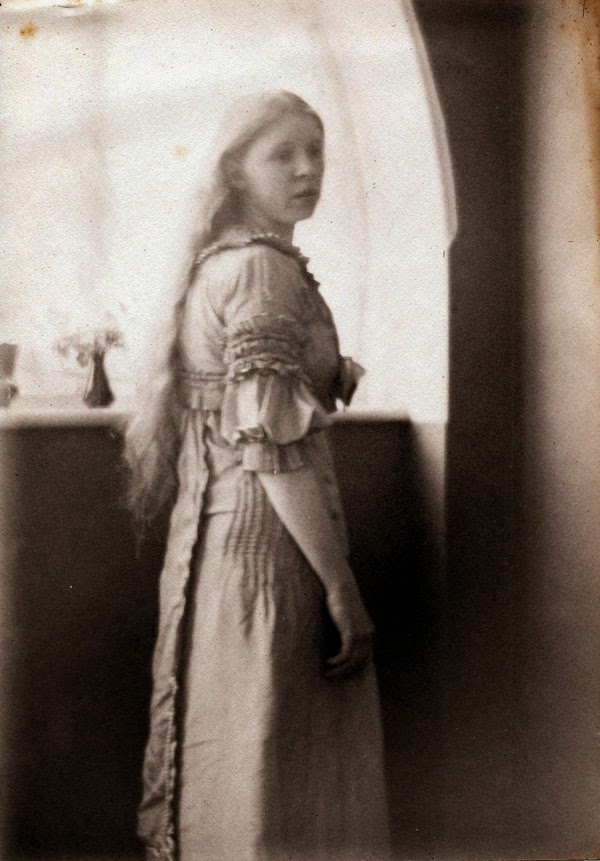 As usual, there were no names or dates. It's frustrating, but also tantalising. 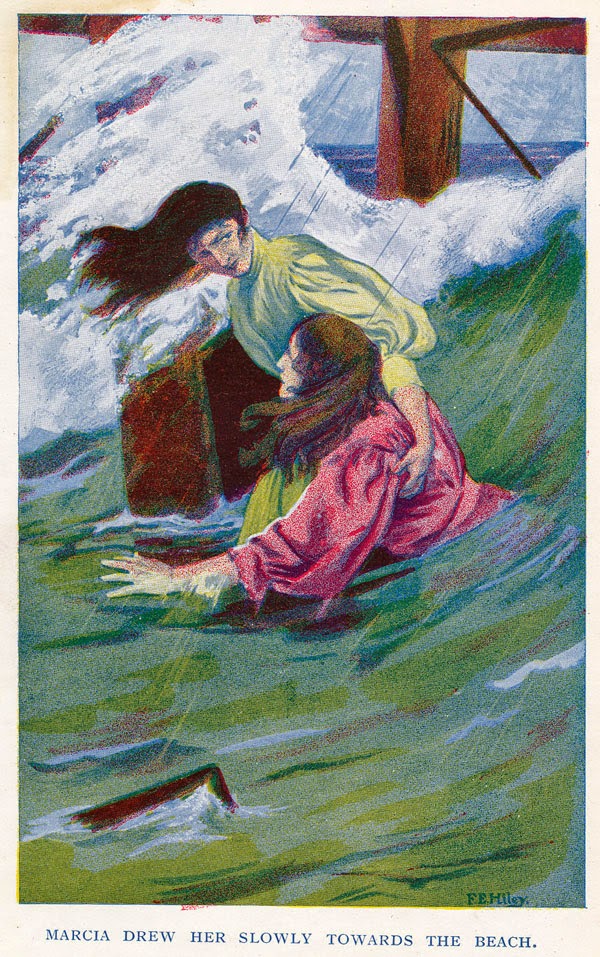 The same pile of books also yielded this early colour plate from a 'penny dreadful' published by the Society for the Promotion of Christian Knowledge. The SPCK must have published thousands of novels for younger readers, as I always find several a day. Like Mills and Boon romance novels, they follow a strict template and I've noticed that temperance is a recurring theme.

Alcoholism appears to have been a big issue in the 1880s and 90s. My great-grandfathers on my mother's side were both late Victorian drunkards, with numerous illegitimate children. My mother remembers her long-suffering grandmother saying "When 'ee dies, I want to 'ave three years to meself."

Her wish came true. The husband died in the early 1940s and my great-grandmother was determined to have her three years: "Hitler's not gonna get me. I'm 'aving me time." She survived many air raids and died just over three years to the day after her husband's death.

The culture of self-improvement and temperance appears to have had a strong influence on the following generation, as my mother's parents (and many of their peers) were strict teetotalers.

In the history of our family, I see myself as a Charles II figure, restoring the traditional merry-making after a period of austere puritanism. But without the illegitimate children and gambling.

The following day, I worked through another collection of books and found this touching note, written by a young girl:

"I am going to save up for a 1/2d light colourd lipstick and a small box of Ponds Powder if mummy will let me, a small scotch red purse for my red handbag and the Penguins Club badge before it starts again." 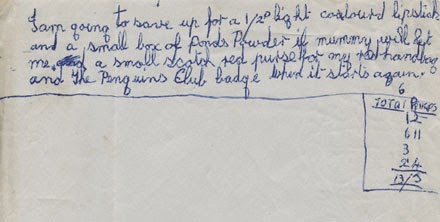 I hope that I'll find more notes and photographs in books. but failing that, I can look in other places, like this wall in Ilfracombe: 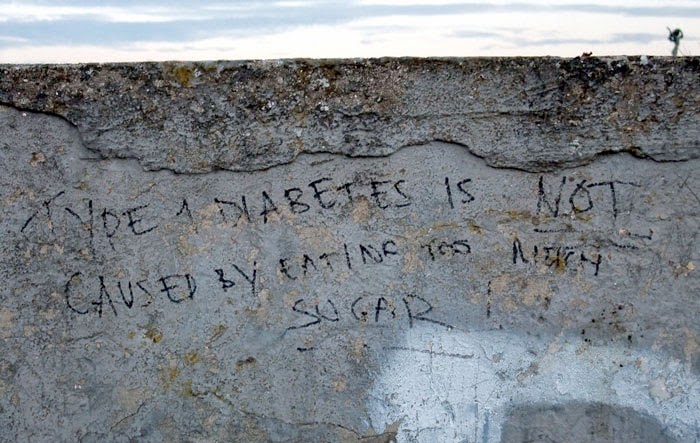 I'll take their word for it.
Posted by Steerforth at 9:03 pm

1905 for the photos? The clothes look like fancy dress, or very "artistic". Is she wearing Pond's lipstick?

Yes, I thought Edwardian rather than Victorian.

Nice Green Man on the church there.

yep as Judith says, a green man, which, whilst not rare to appear on a church, is still somewhat unusual in flaunting its paganism upon a christian site..

Well your sons walked into that one. Next time they want a McDonalds, you can simply retort. 'Well I would only I don't want to be a hypocrite so it's the salad bar for you two!' How ironic that one of them felt ill after.
Fascinating musings re the ancestors' relationship with alcohol. Might explain why my grandparents only ever had a sherry at Christmas! Glad your great grandma got her three years peace and quiet from him outdoors.

There are many things I wish I'd done before my parents died, but one thing I am glad I did was sit down with my mother and go through their shoebox of photos. She told me who everyone was and I wrote the names on the back. I knew that after her generation was gone, no one would know who those people and relatives were.

Judith and Worm - I'll be looking out for them now with the same obsessiveness that helped my complete the I-Spy books.

Laura - I wouldn't completely knock the evil M-pire. The 'drive-thru' experience is perfect for children on the spectrum - they don't have to leave the car and interact with other people. Also, the menu is completely predictable - my son hates surprises.

Joan - It's so important to do that. I also try to keep as many family stories going as possible, so that the names and dates have more interest. My father's only sibling died on Monday and I'm now aware that it's up to me to keep the family history going.

I have some old photos from my grandparents' youth that I can't identify. However, some of the ones I've been able to put names to, really surprised me. I was amazed at how little some of my relatives had changed between the ages of 20 and 50 or even 70. Andrew still looked very much like Andrew, in spite of the changes in hair colour or clothes. I've been trying to track down the names for some of the others, but it's slow and frustrating work.

The top photo lady looks about 1914 to me - the hairstyle is 1914 and the Russian folk influence in the neck and bodice makes me think post-Ballets Russes (1909)when a lot of Russian influences entered European fashion.See earlier version:http://www.popscreen.com/p/MTUyNDI3NjEz/1899-Print-Russian-Folk-Dance-Women-Dancers-Costume-Original-Print-

The lower girl is harder to date, but a little earlier than 1914 I think. But look at those tucks in the side of the dress ready to be let out - that would see her right through marriage and any number of pregnancies.. Such thrift!

On the other hand, I have been known to talk through my hat while grasping the wrong end of any stick in sight.

I immediately thought of the young Virginia Woolfe, around the age 20, when viewing the top female photo. The similarity of hairstyle is striking and might make for a very early Edwardian date. Plenty of VW via Google Images for comparison.

Carol - You must have good genes in your family. Mine are barely recognisable from their younger selves.

Dale - You could be right. The woman looks more modern than the average old photo, but I wonder if this wasn't because new technology had made snapshots easier to take, so people didn't have to adopt such a stiff pose?

Peter - I'd be very surprised if this was pre-1900 too. The hairstyle and clothes are more practical. But what's particularly striking is the seismic changes in women's fashions during and after World War One, after decades of slow change.

Probably someone else has suggested this, but could the bear be supposed to be Winnie the Pooh in search of honey (his umbrella was black, of course)?

Zoe - It's possible. A. A. Milne's home is within parachute distance of the church.

The photos look like something from a W G Sebald book.