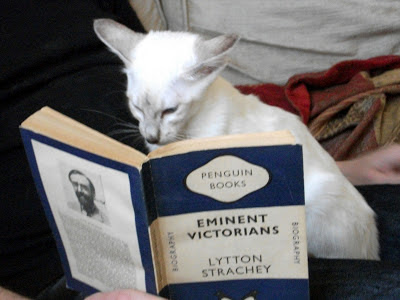 I solemnly swear that I will not make a habit of posting pictures of my new kitten in 'amusing' poses, but please indulge me for a moment. After years of thinking many unkind things about cats and their owners, I have become completely won over by the feline world. Perhaps it's true that there's nothing worse than a convert.

I just didn't 'get' cats before. They came across as unaffectionate ingrates, capable of sudden acts of unwarranted viciousness, leading a sordid double-life of violence, sexual promiscuity and defecation in the gardens and alleys of Britain.

I thought that the owners were even worse, particularly those funny little women who used to buy the 'Cats Are Better Than Men' book from me. Did they really prefer to to form a relationship with a mute animal rather than a real person?

When a friend told me that her cat had been diagnosed with diabetes and would now need a daily injection, I couldn't see what all the fuss was about. Why didn't she just have it put down?

But now, at last, I understand. Perhaps cats are better than men, after all.

I'll get my coat. 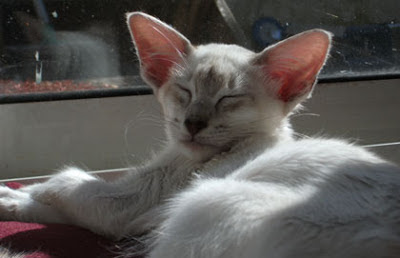 I'm not sure how much the kitten is helping my oldest son, but my wife and I are definitely benefiting from his presence. We almost fight over the opportunity to lie on the sofa and let the cat fall asleep on us. It's like taking valium, minus the slightly depressing sense of detachment from reality.

As much as I love dogs, I can do without the early morning walks - there's nothing good about having to pick up excrement in the rain on a cold winter morning. I'm also glad that our house won't have that cloying dog smell of overcooked peas. But most of all, I'm relieved to be free from the awful feeling of guilt that dogs inspire, with their big, reproachful eyes.

If you have a difficult child, a dog might seem like a solution, but there is a danger that it will simply add to the stresses of family life.

Someone recently told me that a friend of hers  - a very thoughtful, considerate man - bought a small tree as a birthday present for his wife. She was having a very difficult time with her children and as she loved trees, it seemed like the perfect present. However, when the plant was unveiled, she broke down and wept: "Oh God, not another fucking thing to worry about!"

The only person that remains immune to our kitten's feline charms is our seven-year-old son, who may be having a fit of pique about being usurped as the youngest and cutest. When asked how he felt, he replied that he was "like Switzerland in the War. Neutral."

The kitten remains unnamed, but the top photo has given us an idea. Not Lytton Strachey, but perhaps 'Kitten Strachey'? Strachey (which sounds a little like 'Stretchy') for short?

It's growing on me.

Blimey did a 7 year old really know about Switzerland and the War and stuff?
And does our house smell of overlooked peas?
And is it not perfectly normal to pose one's pets in amusing situations?

I'll be most disappointed if the next post doesn't include one with the cat wearing sunglasses.

I must admit, I was a bit shocked by the Switzerland comment, then I remembered that we'd been watching the Michael Winner masterpiece Hannibal Brooks a few weeks earlier, which ends with Oliver Reed trying to escape from Germany.

I can't tell you if your house smells. However, if you're in Norfolk, you probably live in a property where the ratio of square feet of space to square footage of dog ensures a relatively unmalodorous environment. I live in a broom cupboard.

I think that posting cute/funny pictures of pets or children is like playing the joker in It's a Knockout (sorry for alluding to Stuart Hall), so I'll leave it for a while before posting any more pussy action.

Some dogs smell, and some don't. Some cats are more interesting and cute than others. Your cat looks exceptionally charming. I don't want to get another cat unless I can get a winsome one. I love the picture of him reading.

Agreed. I'm sure my dog didn't smell, as she was a mongrel and seemed to lack the defects that pedigrees suffer from.

Also, I remember staying with some friends in Holland who had five cats: three beautiful Persians who did absolutely nothing and two scrawny Siamese, who were far more intelligent and affectionate.

So that's a long response to your more incisive point.

And even though I'm a bit late, may I be one of the first to welcome your new feline overlord. He's beautiful! I've had cats pretty much all my life and it's never a dull moment - they're infuriating and adorable at the same time, and often like eating really weird stuff like Welsh Cakes, peas, eggshells, and crisps. I like the name Kitten Strachey.

Beautiful cat. However, I'm afraid he will end not thinking much of humans (at best, not much of Eminent Victorians) after reading Stratchey's book (funnily - sort of -, I remember the first "real" novel I read, after giving up kiddies pictures books half a century ago, was called Le chat du Capitaine, and it was about a lady that used not to like cats: from what I understand, it was a translation from English, and most probably, written by one of these old english ladies).

As long as Strachey doesn't become Scratchy - leading people to think she was named after the Simpsons' "Itchy and Scratchy Show".

Given the impressive size of her listening devices, I would call her either Echelon or Bletchley.

What a beautiful cat, is he a Siamese?

I'm glad you're a cat convert because they are such fascinating, cuddly animals.

I couldn't handle the dog walks either, and you image of picking up dog poo in the rain has left a permanent stress-fracture in my brain!

Mrs Jones - I suppose eating eggshells is a good way of getting calcium?

Tororo - I suppose 'Orlando - the Marmalde Cat' is the most famous work by a slightly eccentric Englishwoman.

Dale - We were very worried about the ears when the breeder sent a photo, but you get used to them. They remind me of Spielberg's 'Gremlins'.

Kid - They ate cats in the War, didn't they.

Sarah - He's a variation of a Siamese, but with longer fur.

Sorry to leave you with such an unpleasant enduring image! ;)

I have promised my daughter a kitten, possibly two. We will start looking when we get back from holiday. Undecided whether to go pedigree or moggie though - I had a pair of Burmese before and they were so wonderfully human! ...

Aren't mongrels supposed to be cheaper and suffer from fewer health problems? Maybe that's just in the dog world, where the Kennel Club seem to actively encourage grotesque deformities.

Please don't apologise for posting cat photos. If they are all as cute and clever as the one at the top of this post you are forgiven.

And I rather like the name, only I would probably have chosen to call s/he "Kitten Scratchy."

Signed: a former cat owner, with the scars to prove it!

well I got a good laugh reading about Kitten Strachey, and his adventures reading "Eminent Victorians." Did you say he fell asleep whilst reading?

Just kidding. I adore cats. ( And in fact just recently was thinking about Lytton's biographies which I think I might like much better--at least in memory--than many the modern biography). but warning, cats reading books...okay. Cats dressed up in little cat clothes...dont do that to the dear companions.

I haven't even read the post yet, but love the title so much you could just type qwerty etc and I'd be happy.

And you do realise your seven-year-old is a genius? I don't believe any other seven-year-old even knows about Switzerland's role, let alone could make the analogy to his own predicament.

Carol - It's a he, but I keep calling him her, as he's so soft and beautiful. Scratchy makes me think of fleas, so I'll stick to Strachey.

Suki - I suppose that means I shouldn't photograph him wearing sunglasses ;)

Zoe - Yes, I was rather impressed by the analogy. I'm just beginning to realise how bright he is. How odd to think that this time five years ago, I was worried that there was something wrong with him because he wouldn't speak.

Judging by the cat's expression, that book must be better than tuna. Not just another cute cat picture; a superior cat picture.

Ah. I see. I hadn't even thought about fleas, I was just remembering all the claw marks I've had on my hands and arms over the years, dealing with cats. Not only my own, but my cousin's cats, and a friend's cat named Sugar (she was anything but sweet -- in fact she snagged and ruined my favourite skirt by digging into my leg with her claws). But your kitty looks lovely in the photos and i'm glad s/he's working out so well.

Have a good weekend, xoxo Carol