The highlights of last week were an exploding laptop, a leaking sink, a dead mink (the rats will inherit the earth), a new crisis with my older son and the discovery that I have a lung infection. As none of these things make a particularly edifying blog post, I'm posting some photos I took of some abandoned buildings in Iceland.

If that seems a bit 'random' - as the kids like to say - I should add that I've just been reading Andrew Moore's superb 'Detroit Disassembled' and have been thinking about why ruined buildings are often so more interesting than well-maintained ones.

These crudely-built structures, with their rusted, corrugated iron roofs, were once a hive of activity for Iceland's fishing industry. Why they were abandoned is a mystery. 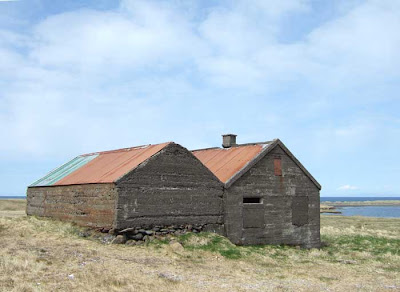 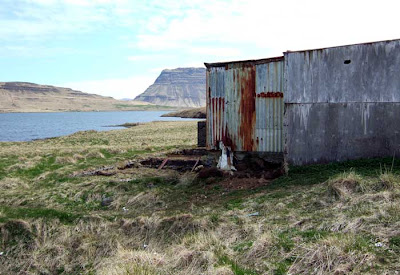 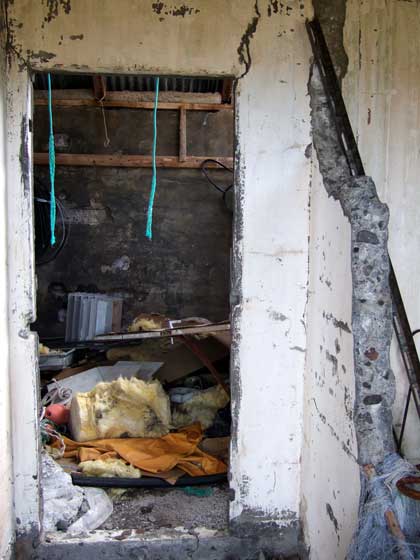 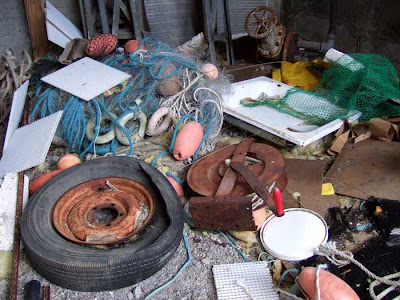 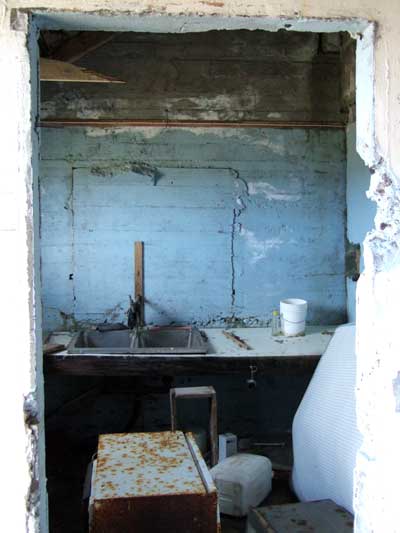 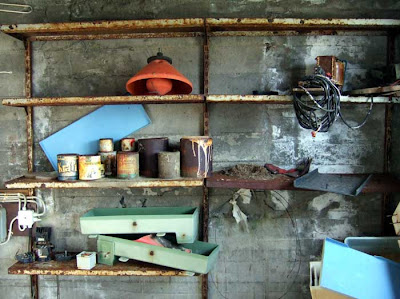 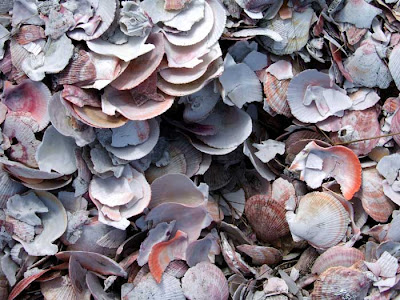 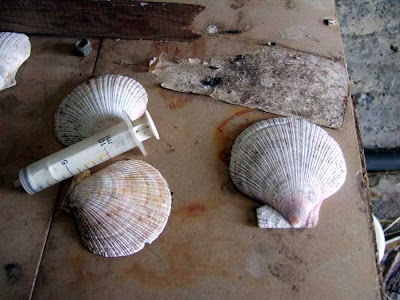 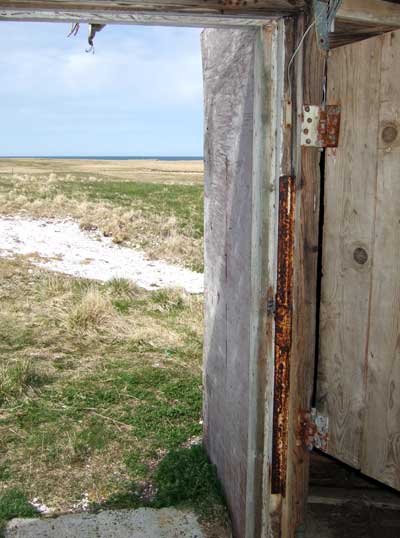 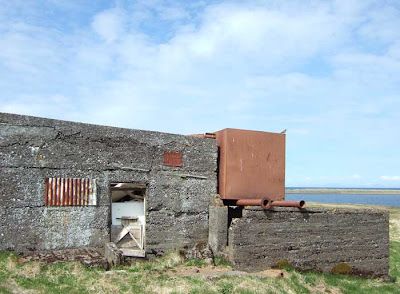 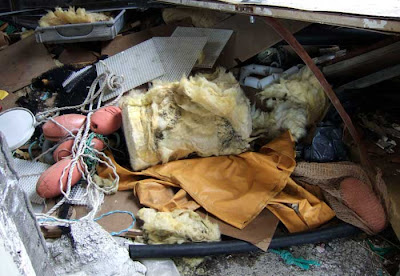 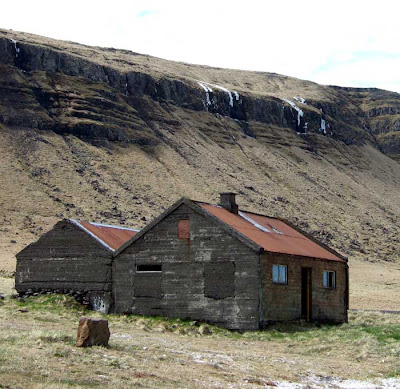 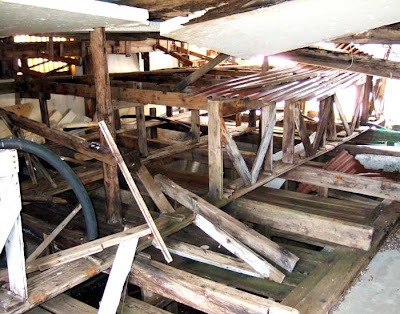 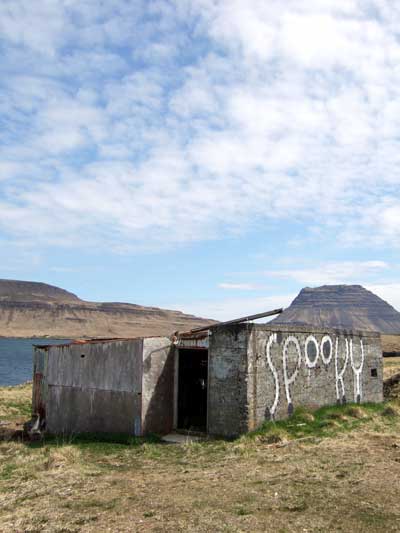 It looked as if the buildings had been abandoned in a hurry. Sou'westers were strewn across the floor of one room, while another had mattresses propped against the walls. But the thing that unnerved me most was a small entrance to a dark, unlit basement, which I nearly fell into. After adjusting my eyes to the gloom, I could see a chair and lengths of rope, as if someone had been held captive here.

It was like being in a Mike Nelson installation, but without the irritation of being constantly distracted by other people. Here, your imagination - and paranoia - could run wild. I've no doubt that everything there was related to the fishing industry, but the murky basement and discarded syringes were a little unsettling.

It is shocking how quickly buildings fall into decay. As the roofs of these structures rust, the late rains will seep into the walls, freeze and create fissures until, eventually, the inside is hard to distinguish from the outside.

Every ruin is a reminder that even the most solid-looking building is in a state of flux. We struggle to maintain the illusion of permanence, but the moment we abandon the fight, we find ourselves in Detroit.


We wonder,—and some Hunter may express
Wonder like ours, when thro' the wilderness
Where London stood, holding the Wolf in chace,
He meets some fragment huge, and stops to guess
What powerful but unrecorded race
Once dwelt in that annihilated place.

Saying prayers and sending many good wishes that all the problems soon are solved, and that the lung infection is something which responds quickly to treatment and isn't something exacerbated by the cold and damp in the warehouse.

Take care of yourself, and God bless,

Phew, what a relief! I glanced at the photo first (as you do) and jumped to the immediate conclusion that it was YOUR barn.
The rat, as you say, will inherit the earth as they carry both bubonic and pneumonic plague so I sincerely hope that you did not handle the dead mink. And could your lung infection have been psittacosis, spread by birds and their droppings? Please - always wash your hands!

Thanks Carol. I'm sure that the working environment and the harsh winter haven't helped. I'm taking antibiotics and getting plenty of rest. On the bright side, the days are getting longer and warmer (today's snow excepted).

Clive - No, my barn isn't quite that bad and I've had several people working hard to clean it up. Thanks for the advice - I've been careful about avoiding touching the ground with my hands, but need to be equally vigilant about the droppings. Fortunately the robin leaves the books alone - he seems far more interested in the computers.

I have a pair of very thick rubber gloves for the mink!

Here in Detroit we call it Ruin Porn :-) There is certainly a lot of disfunction & decay here in the Motor City, and I could spend days writing about why that is - racism & poverty leading to poor education opportunities & casual violence among an apathetic populace with a decline in manufacturing is a short answer - but there are still areas of beauty & a core group of committed citizens who are trying, in small ways, to turn the tide. Maybe someday someone will produce a book showing the good & beautiful things that still exist in Detroit, but I'm not holding my breath! As a Detroiter, I feel a bit like the old man in Monty Python's The Holy Grail "I'm not dead...I don't want to go on the cart...I'm feeling better..."

By the way, I highly recommend the doc 'Searching for Sugarman' about Detroit's legendary musician Rodriguez (who still lives in one of my former neighborhoods, Woodbridge.

The mink sounded and looked OK last week- what killed it? Was it overambitious in taking on rats? Perhaps you ought to get a ferret.
Hope the lungs impro0ve.

I've also been following what's happening in Rochester, since the beginning of Kodak's demise. I would hope that the example of Detroit might encourage a greater level of intervention.

Anon - I'm pretty sure the mink was killed by the rat. Someone said that there was a bite mark and rather than get up close, I took their word for it!

Apparently the mink - which isn't a native species - is probably descended from a group that were released from a laboratory, by animal rights activists.

The last few years have seen an explosion of new businesses & commitment to improve life in Detroit.  But I don't wish to sound naive - there are still many, many long-standing problems & I honestly don't know if they will ever be fixed. The education system is dismal (and has been for decades). One thing to keep in mind is that Detroit's landmass is huge - if we were smaller it would be easier to consolidate city services & better serve the community. Another thing is racism - the majority black population do not trust the primarily white suburbs & often seem more likely to cut off their own nose to spite their face, than to allow 'outsiders' to help them (and on some counts I am certainly empathetic). Some improvements are seen as gentrification & a way to marginalize black residents. Violent crime is still a concern. Still, we press on & there are many things to look forward to, I feel. Plus, where else can you buy a mansion for a song? Cheap real estate is one reason why we have so many young artists & entrepreneurs moving here from all over the world.

Wow! Thanks for the links - I know what I'm going to be doing for the next few days.

Thanks for introducing me to Horace Smith - not at all a bad also-ran.

Those Detroit links are great thanks. (I'd second Searching for Sugarman. I'm sure you'd love it Steerforth. Good music too...)

I've just been through half of the links (more tomorrow) and they are inspiring. Let's hope that small businesses and artists can show a way out of the post-industrial malaise. The moment people really believe that the city has a future, property prices will start to climb and that will hopefully encourage further migration.

Sam - After Kim recommneded 'Searching For Sugarman' I ordered a copy, so I'm looking forward to watching it.

The lungs are on the mend. I'll try to work in warmer, less unsanitary conditions next year. Indoor snow and mink-killing rats can't be conducive to good health.

You can pick up nasty things on farms, and not just dead mink. Mouldy hay is not too healthy for humans... do take care!

Oh God, I'm worried now - I'm right opposite a barn of rotting hay. I should have realised that there was a reason why that property was cheap!

I hope things improve, particularly your son's problems. I've probably bored you with the saying that, unfortunately, is the truest thing I think I've ever read: 'You're only as happy as your least happy child'.

I hope that's not true, as things have reached a new level of awfulness during the last few days. Although I feel as if I'm in a state of shock, I'm trying to emulate Jack Hawkins and keep a stiff upper lip - my younger son needs to be protected from the maelstrom.

Here's hoping that the tides of fortune turn for you, soon. In the meantime, you might like this photo blog. http://kingstonlounge.blogspot.com/ He does some wonderful work in capturing "the beauty of decay." (Did Roland Orzabal say that first, or was he quoting? I love the phrase.)

Chris - Many thanks - the photos are stunning, but how sad that these buildings have been so neglected, with some even demolished. I particularly loved the tricycle in the hallway.

I'm glad you like the site -- the only problem with it is that he posts infrequently, which, I suppose, is how is has to be with a blog of that nature. He's quite a talented photographer and he is about some important work, as well. I respect what he is doing.