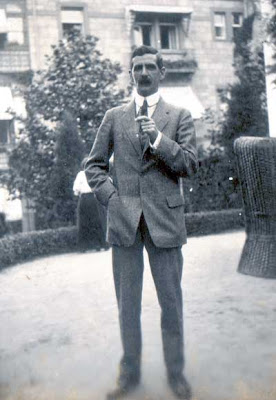 I've no idea who this man is, but I have his photo album. Compiled around 100 years ago, the captions are written first in German, then later in slightly stilted English. I think he may have married an Englishwoman.

Today, when the collective memory of war still taints Anglo-German relations (and the audience of 'Britain's Got Talent' boos a man who announces that he's from Germany), it's easy to forget how close the two countries were before the First World War. The sense of kinship with 'our German cousins' was reflected in the late Victorian vogue for Teutonic names like Hilda, Walter and Gertrude.

People even went on holiday in Germany. When I suggested going there to my wife, she snorted and looked at me as if I'd made an indecent suggestion, but I think she'd be pleasantly surprised if she went here: 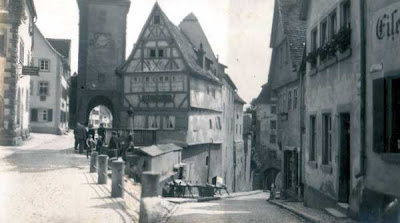 This is Rothenburg, a rather attractive-looking medieval German town. I had wondered if it had been flattened in the War, but fortunately the far-sighted mayor of Rothenburg and a senior figure in the US military worked to ensure that the town was relatively unscathed: 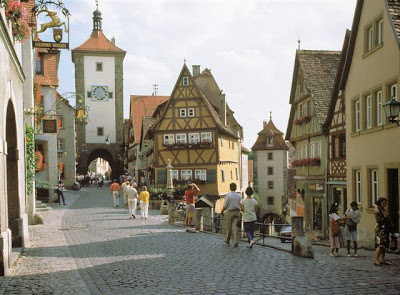 A century ago, the album's owner stayed at Rothenburg before moving on to a spa town called Bad Kissingen, where he met a man called Sir Lionel Phillips (seated): 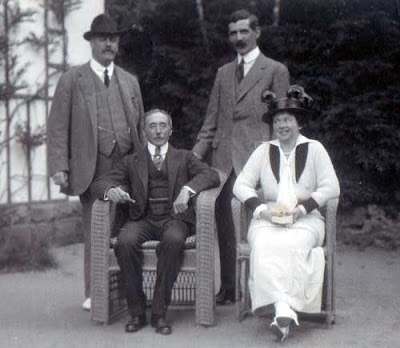 Phillips was a remarkable man. Born in London to a family of Jewish merchants, he went to South Africa to make his fortune and at the age of 20, walked the best part of 600 miles from Cape Town to the diamond mines of Kimberley, where he went on to become a diamond sorter, ran a newspaper and managed a mine.

When this photograph was taken, over 30 years later, Phillips was a wealthy mining magnate and politician, with a colourful career behind him. Perhaps too colourful for some people. In December 1913, he was shot five times by a disgruntled South African trade unionist.

Sir Lionel survived and perhaps he came to Bad Kissingen to take the waters and recuperate. I can only assume that Herr Doktor's treatment worked, as Sir Lionel lived for almost another quarter of a century. 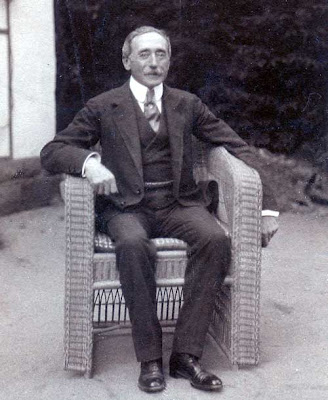 I quite fancy the idea of spending several weeks in a spa town, but it would have to be an old-fashioned one with exiled aristocrats and American heiresses. Obviously gyms would be out of the question, but strange machines and ridiculous diets would be allowed (compulsory, in fact).

In the evenings I'd dress for dinner and, perhaps, attend a chamber music recital or discuss Schopenhauer with pallid young women.

Phillips appears in several photos, including this grainy shot: 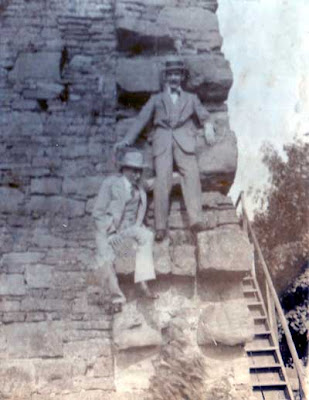 And this group portrait, with Phillips on the left: 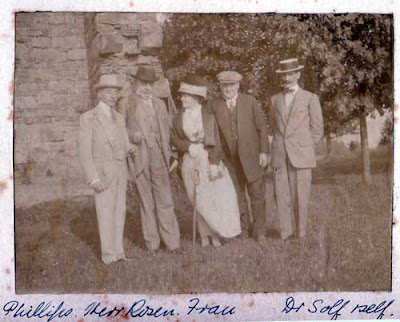 Sadly the rest of the album largely consists of blurry shots of well-known landmarks around Europe, although there are some interesting views of Sir Lionel's Hampshire estate, Tylney Hall (now a luxury spa hotel), which he and his wife Florence restored, incorporating the latest Arts and Crafts designs. Even Gertrude Jekyll was roped in. 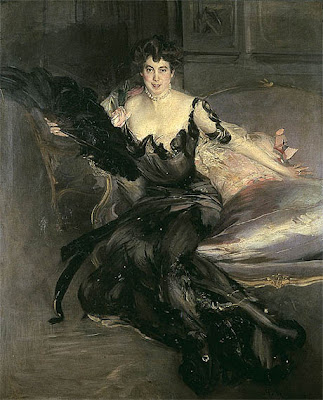 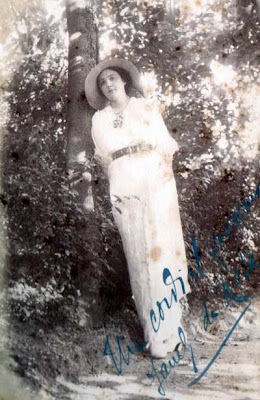 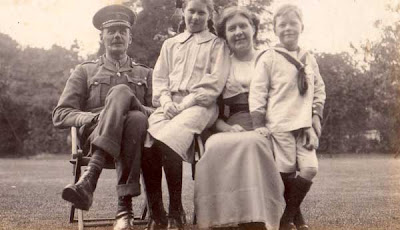 The final photograph is from 1916. The trauma that was experienced by thousands of Anglo-German families is vividly portrayed in Philip Gibbs' underrated novel 'Blood Relations'.

In the 1920s, once the vitriol against the Hun had subsided, the cultural ties between Britain and German began to be restored, but of course it was not to last. Sadly, Sir Lionel lived long enough to witness the rise of Naziism.

Unlike most of the photograph albums I've come across, this one gives the reader a few clues, but the lack of dates and the often illegible script is frustrating. I had hoped that there might be a memoir or biography about Phillips, but I can't find anything.

As for the mysterious figure who created the album, I don't suppose that I'll ever discover his identity. But thanks to him, I have discovered a place I want to visit and a life that I'd like to know more about.

I'll send a postcard from Rothenburg.
Posted by Steerforth at 11:17 am

This post reminded me or Billy Wilder's comedy The Private Life of Sherlock Holmes, the part where an unamused Queen Victoria states that she can't believe her beloved grandson Willy could ever nurture such a dreadful project as sending Zeppelins for bombing England.

It's bigger than the EU. You can't blame them for Starbucks, KFC and McDonald's. Homogeneity is as much the product of global corporations as it is the gnomes of Brussels.

In the meantimes, I will continue to listen to 'The Wurzels' and boil my vegetables for at least 15 minutes.

Tororo - The funny thing is that there's more than a grain of truth in the joke. The Kaiser would never have dared go to war with his grandmother. He had a chippy attitude towards Britain, but had to wait until Grandmama and Uncle Bertie were out the way.

Just shows how tangled our world has become.

One of my grandmother's was very annoyed that Herr Hitler shared her April birthday. Not her fault, of course, but it still annoyed her.

And you're right about homogeneity...it was such a shock to walk down Princes Street in Edinburgh and see -- a Disney store!

I spent an interesting three days in Berlin, in 1971. We crossed to the eastern sector, via Checkpoint Charlie, and the contrast was something that will stay with me for the rest of my days.

I've been to Rothenburg, more than once. It is lovely, although a little schmaltzy (it has a shop dedicated to Christmas, all year round). Mostly lovely though. For spa town fiction, The Good Soldier cannot be beaten, surely: http://www.gutenberg.org/ebooks/2775

Your blog is the only one I subscribe to. It is most always interesting and I look forward to seeing it in my "in" box. Thanks!
Bonnie from NC/USA

That black and white Rothenburg photo looks like the back lot of a Universal Frankenstein movie. I'm sure if I look hard enough I'll see Boris Karloff in there somewhere. (Looked like his brother in the last photo of your previous post.)

A great discovery Steerforth. I wonder if there's any way of knowing who the man was? Perhaps he worked with Phillips?

I recommend reading Richard Milton's Best of Enemies, which was published a few years back. It's a fascinating overview of Anglo-German relations from the 19th century to the early 20th.

"He was sent to Kissingen this year and revived in an extraordinary manner, though to my sister and myself the place was most depressing. Here he met
one of his clients, Sir Lionel Phillips, who was staying at the establishment of the fashionable Dr. Dapper; here too were Gen. Botha and Dr. Page Roberts, the
witty Dean of Salisbury."