At the beginning of the week I was thinking about how much more interesting this blog used to be when I had access to the vast collection of photo albums and journals that ended up in my old workplace. I miss the personal diaries and the extraordinary pictures that used to lie hidden in a delivery of ex-charity shop books. I miss Derek.

Hours later, by an extraordinary coincidence, my ex-boss phoned. I hadn't spoken to him since September. He wanted to know if I'd consider returning to my old job. I was flattered to be asked and said that I would think it over, but I already knew the answer.

Going back is always a mistake.

I thought ruefully about the photographs I'd never see; but in the second odd coincidence of the day, later found an album at the bottom of a box of dusty books: 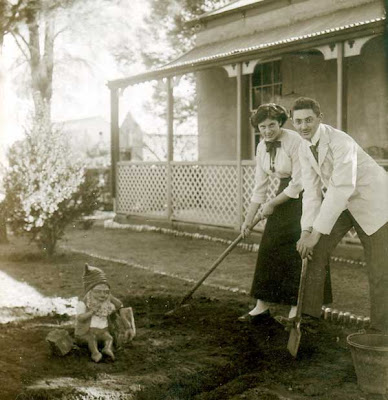 The photos appear to have all been taken in South Africa around 1911, but the writing is in German. It's possible that some of these scenes were taken in Namibia, which was then the German colony of South-West Africa. 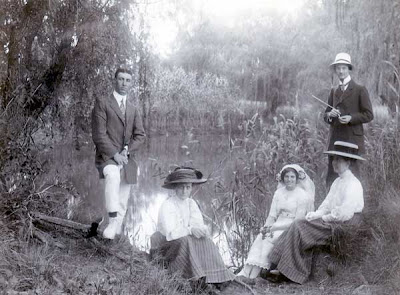 Some of the scenes look cosily European, but others provide a stark reminder that these people were in a very different environment: 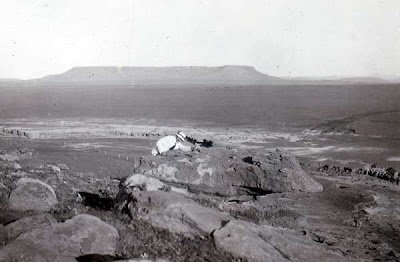 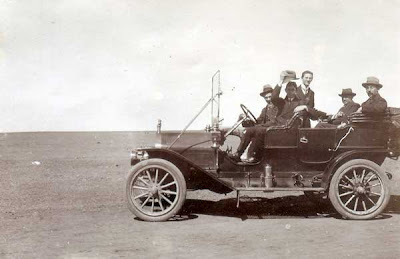 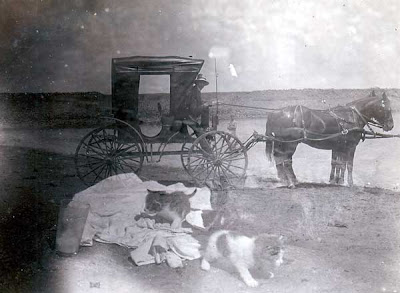 I presume that this is a double exposure, rather than any exotic variety of local fauna 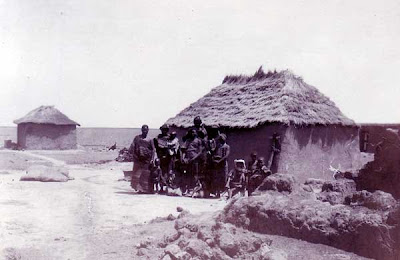 Although this is Africa, the natives barely feature in this album. They can occasionally be seen in the background, quietly, invisibly performing the menial tasks that allowed the Europeans to enjoy such a high standard of living. 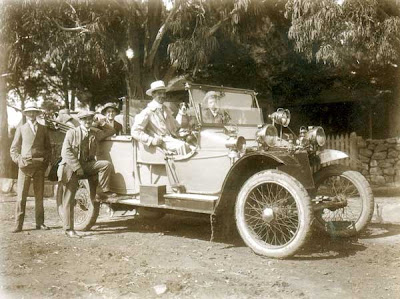 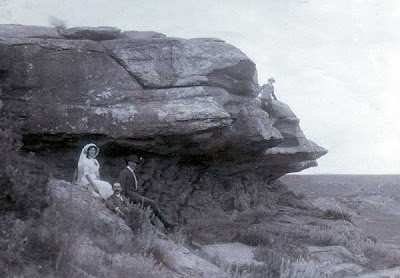 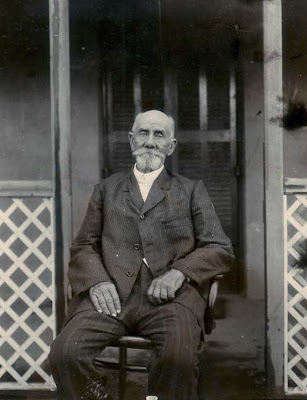 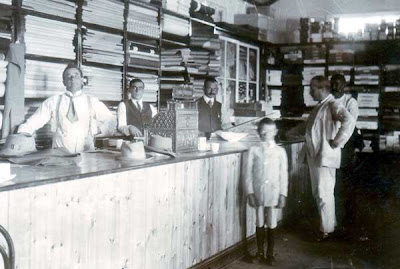 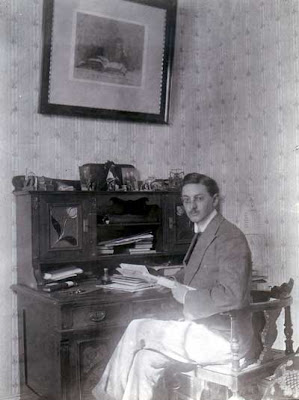 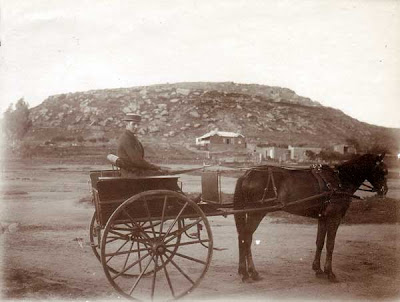 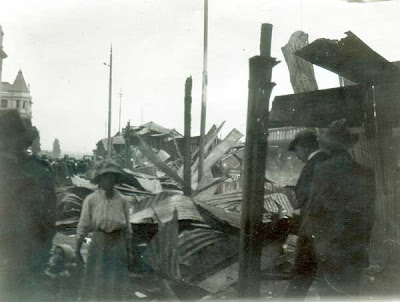 This photo is one of several that shows damaged buildings and vast crowds of men. I wondered if there was some civil unrest in this period between the Boer War and First World War, but couldn't find any references. 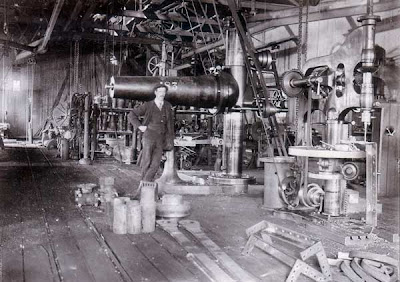 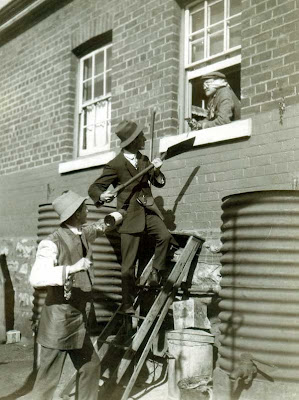 This is my favourite picture - an extraordinary image which looks staged, but I'd like to know more about the background (or 'backstory' as everyone seems to say now) 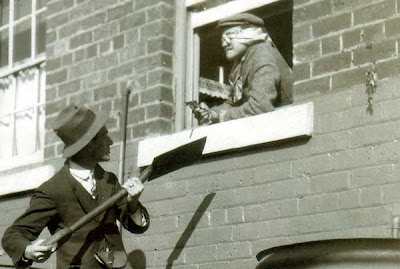 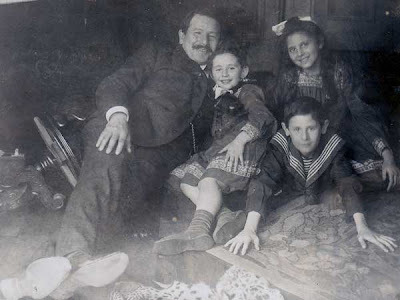 This album raises so many questions. Are they German settlers in South Africa and if so, what happened to them when war broke out in 1914? If they lived in South-West Africa, did they remain when the colony was ceeded to South Africa, or did they return to Europe?

The children might have lived until quite recently. I wonder what their stories were.

Finding this album reminded me that my favourite part of working with 'recycled' books was always the photos, with their tantalising glimpses of lost, forgotten lives. However wonderful a book might be, it is always one of many. A photograph album is unique.

I have been distracted by other things during the last nine months, but I'm going to find some new sources of pictures. There's nothing I like more than restoring a worn photograph into an image that gains a whole new lease of life on the internet.

I'm sure some readers of this blog will remember this: 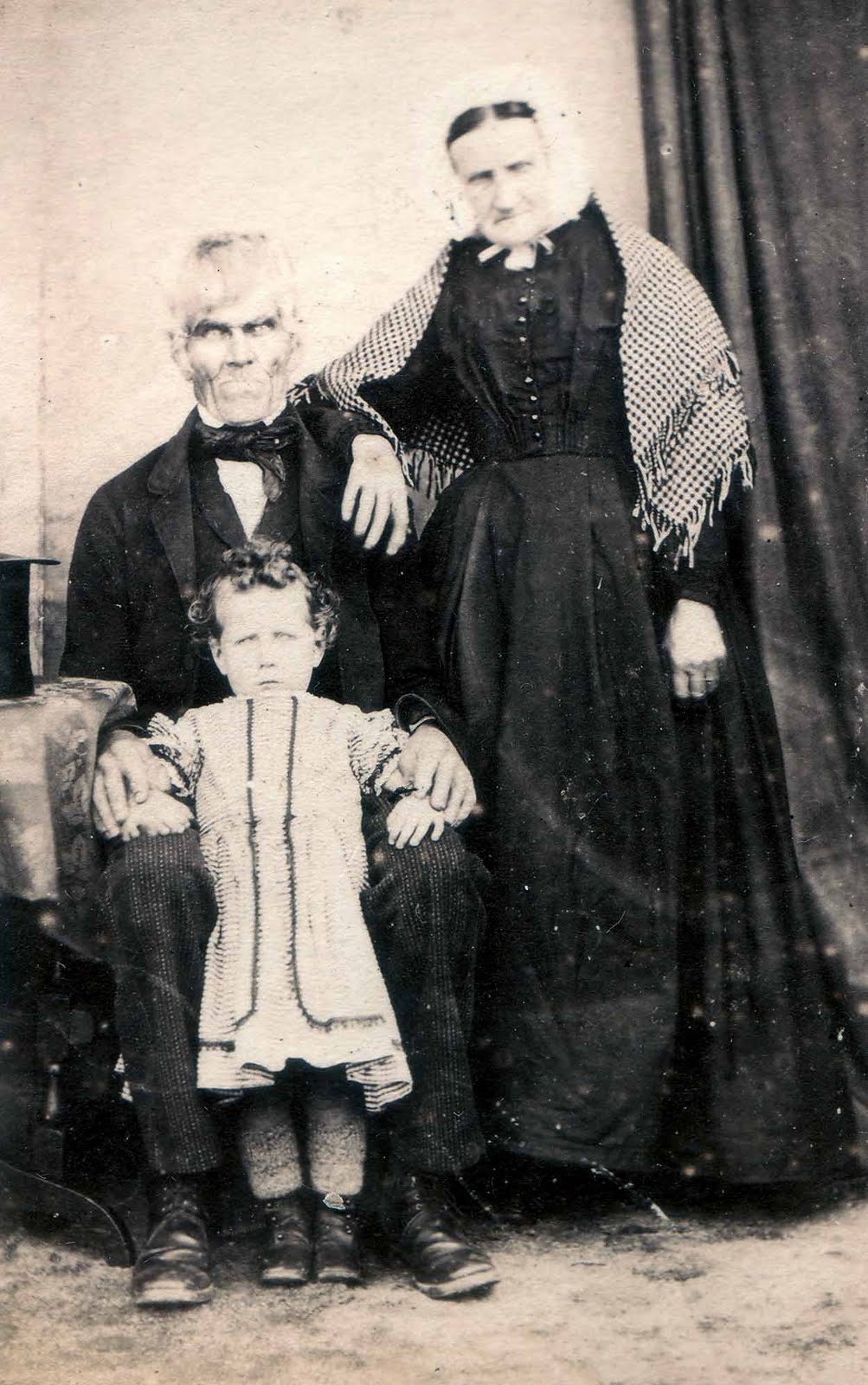 I hope that there's a lot more to come.
Posted by Steerforth at 9:49 pm

amazing pictures. how delightful to find this in the bottom of a box. thanks for sharing and i miss derick too.

I seem to recall that it was the collections of photographs and their uncertain histories, along with the amusing book covers which first drew me to your blog.

Near where I live in North London, there’s a fascinating old style junk shop/house clearance emporium, which is littered with the fading memories of peoples’ lives from the Victorian era and onwards. Piles of old photographs and albums, which were once treasured memories intended for family and friends alone, are often idly strewn across the shop. So sad that these past lives are now rendered inconsequential but for the few moments that I allow myself to be transported back in time - to look and to wonder.

Gosh that last one is frightening!

Yes, Steerforth - more photos please!
Endlessly engaging & fascinating. I wish I could afford to be a serious collector. Or could afford the time to be a casual collector.

Have you seen the Shorpy Historical Photo Archive? I subscribe to it and get an email every day with new photos. You can leave comments and also view the photos in close up.

I love the idea of Fred Dibnah resisting modernity, at gunpoint.

Where's the junk shop in North London? I'll pop in next time I'm up there.

The Shorpy archive is wonderful - I shall add it to my bookmarks. I also love the brilliant 'How To Be a Retronaut' site, which is full of the most bizarre, beautiful and evocative images.

I believe I posted this in the wrong thread : )

Can't imagine what treasures lie awaiting discovery here. The comments reveal that this location is close to London ....

Thanks Gill - what an amazing room, like a scene from a post-apocalyptic film.

I hate seeing books in that state. All too often, they get thrown away by house clearance people.

What did you end up doing with the Derek diaries in the end?

I went back after 8 months out. Whether it was a mistake or not is still a question...

Sarie - Sadly, I had to leave them behind, as they weren't mine to take. The best I could do was borrow the diaries and copy the best bits. I'd say that 95% of Derek's diaries were very dull stuff about the local Mormon church, but the remaining 5% were sublime.

I don't know what has happened to them.

Séamus - On reflection I don't think it's always wrong to go back. A separation can mend as well as break a relationship. Some people spend years yearning to be their own boss, only to discover that it's a poisoned chalice, lonely and stressful.

I do miss the positives of office life, particularly the banter and gossip.

The first photos remind me of Isak Dinesen's "Out of Africa."

Love the photos! I am scanning old negatives of my grandfather and am finding some remarkable images, too. I also liked your post about your father a few posts back. Very poignant stuff, that! It made me remember Derek, too. Has his old congregation been contacted to see if they would like his vision of their history?

It is very 'Out of Africa'.

I didn't contact Derek's old congregation, as I don't think they would have liked to read the stuff he'd written about them! He was very critical. I think the diaries were an outlet for his frustrations with the shortcomings of his peers.

Ideally I would have returned them to the Mormon church, because that's what Derek would have wanted.

It makes one wonder about the possible fate of one's own treasured photos in the fullness of time.

Derek. Legend.
But it was the skill of the editor that brought that out. Do your former employers value him as you did? ISTR that you rescued his diaries from the skip.

Yes, I rescued the diaries from the skip.

My employers didn't understand the magic of Derek, so I suspect that the diaries are now back in the skip.