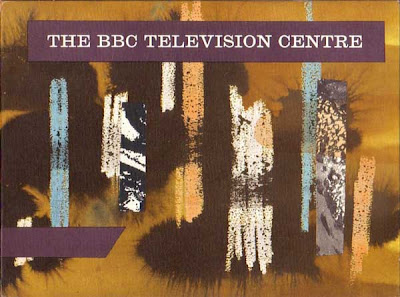 One of the best books I've come across for a long time is a beautifully-produced 1960 hardback, celebrating the opening of the BBC Television Centre in White City, London. That might not sound terribly exciting, but aside from being a stunning piece of architecture, the Television Centre was also emblematic of Britain's changing identity.

I was just going to post a succession of images from the book, but to really capture the energy and optimism of the period you need a bit of BBC Radiophonic music. This clip features a 1960 composition by Desmond Briscoe called 'TV March' :

The optimism of the clip is at odds with the reality of a country that was bankrupted by the Second World War and had only recently abandoned rationing, but modernity seemed to offer a new hope. If Britannia could no longer rule the waves, perhaps it could conquer the airwaves (I'm sorry, it's been a long day).

The following three decades were, arguably, the golden age of British broadcasting. 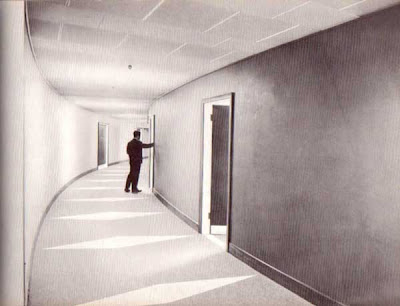 My favourite image from the book
It's hard to believe that the Television Centre is now over 50 years old, but someone in the BBC clearly feels that it is past its use-by date and in 2010, an official announcement stated that all broadcasting from White City would cease by 2013. Thankfully parts of the building are listed.

I have only been to the Television Centre once when, due to a horrible misunderstanding, I appeared on Radio Five as a science expert. The building felt like a powerhouse, packed with enthusiastic people in their 20s, rushing around in a very organised manner. I felt like plankton.

In a multi-channel, digital age, perhaps we no longer need a huge, modernist behemoth at the heart of the BBC, but I'm sure that I wouldn't be alone in mourning the demise of Television Centre.
Posted by Steerforth at 8:38 pm

I suggest you watch(it's bound to be endlessly repeated)Tales of Television Centre which went out on BBC4 only in May this year. I recall the star-spangled opening night (Oh!Raymond Baxter! Cliff Michelmore! Billy Cotton! Pinky and Perky - where are you now?)when Lional Blair led a bevy of leggy lovelies from the courtyard into the buildingwith energetic aplomb. What Richard Dimbleby thought was not recorded...

"I appeared on Radio Five as a science expert."

Thanks for the slide show & "TV March." I love Modern.

Television Centre is a 'landmark' building in so many ways. I feel a good deal of affection for it. During the early 80s, I sent a lot of comedy material there, in the hope that it would strike a chord. I got close, but no cigar.

I did a live 40 minute interview as 'guest of the day' for Radio Devon and Cornwall. That was quite an experience, but appearing as a science expert on Radio Five is in a league of its own!

Once at TVC I found myself in a lift standing between Tony Blackburn and Timmy Mallett. Perhaps my memories of the edifice will not be as fond as others'.

I'd love to gain access to the building before it passes out of BBC hands completely. I once visited Pebble Mill in Birmingham and managed to get inside, although by that time it was mainly out of use. It's a shame they demolished it. Glad to hear that Television Centre won't share its fate.

Roger - Thanks. I'll keep an eye out for it. What did Richard Dimbleby say?

James - I worked at the Science Musuem, helping to dumb-down a perfectly good academic bookshop into one that was more appealing to children and general vistors. I didn't really know anything about science, but for a woman at the BBC who was desperate to fill airtime, it was enough. It was awful. I sounded as if I'd been parachuted in from the 1930s.

Brett - I like a bit of Modern too, when it's done well.

Martin - 40 minutes! That must have been exhausting, but a great accolade. My only experience of local radio was recording a 'comedy' pilot for BBC Radio Nottingham - it was like watching a car crash in slow motion. Terrible. Thankfully it wasn't my idea.

Tim - I'm too old to be nostalgic about Timmy Mallett, but I still have a certain affection for Tony Blackburn, in spite of everything.

Kid - I just hope that it doesn't turn into some awful conference centre. Of course, the ultimate nightmare would be if it parts of it were leased to Sky.

I have a friend who works there, and he once took us up to the Social Club which is a huge bar at the top. The curved corridors were wonderful, and the bar had a real mixture of customers, most of whom didn't bat an eyelid when someone famous came in.

I was on telly once (but Granada) in a quizshow hosted by Richard Madeley - but that's another story.

Well some of us of course grew up with that iconic image, so it’s rather sad, but I’m glad to hear that parts of it are listed. As everyone’s showing and telling I’ll add my snippet. I can’t match yours Steerforth, but I did do a live telephone interview from my office for BBC Wiltshire. The tiny village school of which I was Head had just won a Nativity Play competition sponsored by them and Royal Mail. I did a little blogpost about it, here.

That corridor is in Star Wars, a trooper will come round the corner in a mo and surprise us all.

Saw this and immediately thought of you. What treasures lie here?

At the end of the video you posted one of the videos YouTube suggests shows over an hour of documentary footage of the BBC over a 24-hour period in the early 1950s. It is fantastic. I especially liked the logisitcs that went into coordinating news coverage of a plane from Amsterdam to New York that went missing. http://youtu.be/4K37_naDSEA

I have a copy of this book sitting on my desk as I type. The cover is by John Piper and there is a shot of Piper's mosaic mural inside. I believe this book had a limited print run and was for internal distribution (mine is copy no: 4096) but I'm by no means certain of that. I'd be interested to know how many survived.