An Afternoon With Virginia Woolf 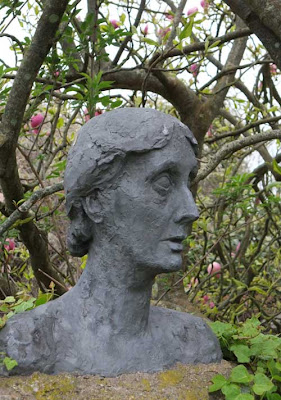 Although I only live five miles away from Virginia Woolf's rural retreat of Monk's House, it has taken me ten years to get there. I tried to go on several occasions, but the house never seemed to be open, limiting its admission times to the odd afternoon. Fortunately, the National Trust have now extended the opening hours.

As yesterday was a particularly dull, dank, overcast day, with a muted light that felt as if the sun was failing, I decided that this was a good opportunity to enjoy Monk's House without being jostled by any Virginia Woolf fans - they're famed for their brutality.

It took ten minutes to reach the idyllic village of Rodmell, but the incredibly noisy birdsong made me feel as if I'd travelled to a remote, temperate rainforest. I was also slightly unnerved by the fact that although I occasionally heard voices, the village seemed to be completely deserted. Perhaps I've watched too many episodes of the Avengers.

Unlike many historic properties, the entrance fee was very reasonably priced at under a fiver, but that's probably because most of the house was off limits, with only four rooms on view. However, the gardens alone make Monk's House worth a visit: 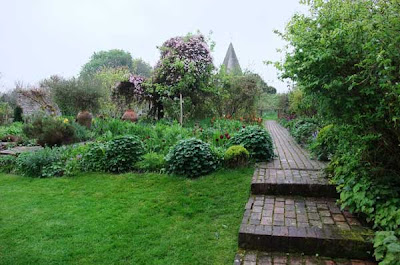 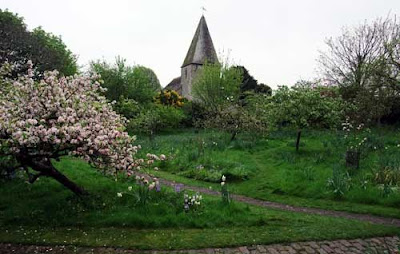 The building in the background is the early Norman church of St Peter's. It is believed that the font predates the church and may be over a thousand years old. The view from the graveyard reminds me of an Eric Ravilious painting: 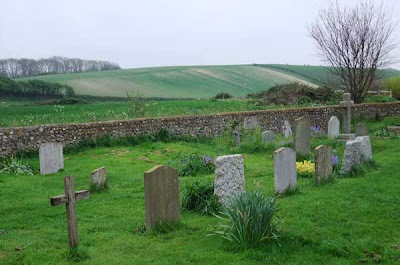 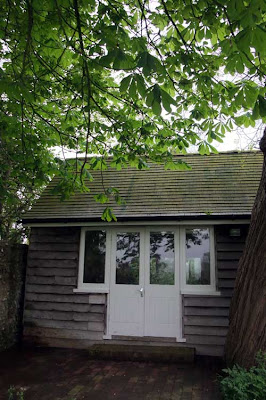 This is Woolf's writing room. It's an inauspicious-looking building, but played host to some of the most important figures of the early 20th century. For example, the man on the right is John Maynard Keynes: 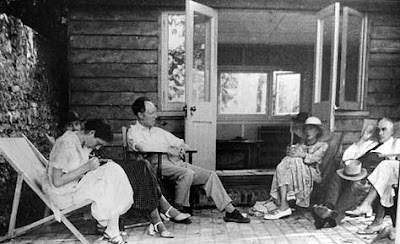 Keynes is also in this photo taken in the garden, with Lytton Strachey on the left: 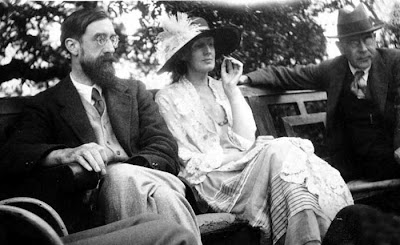 Here are some photos taken from inside the writing room: 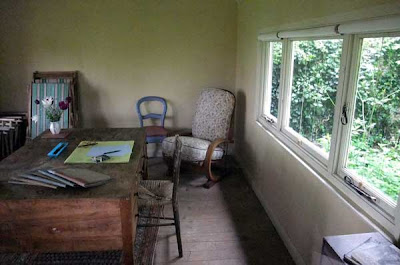 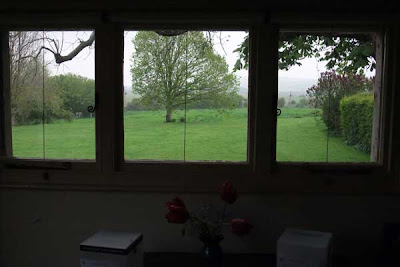 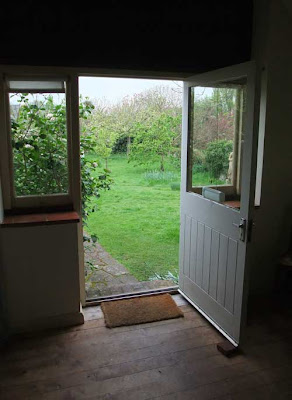 Even on such a gloomy day, the garden still provided some colour: 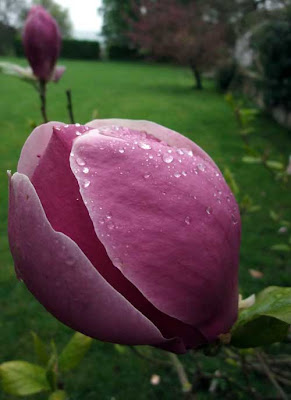 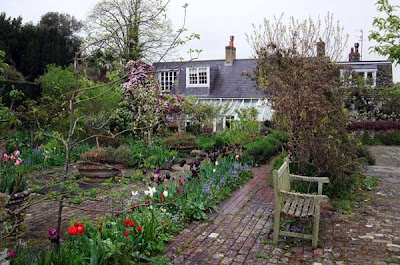 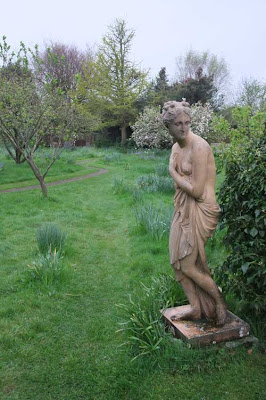 This is the downstairs bedroom: 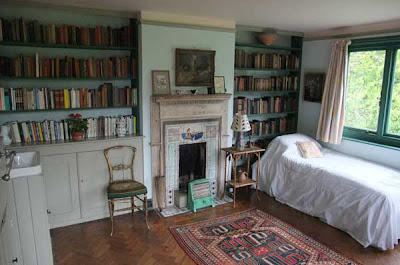 Compared to Charleston, it seems quite austere, but there are several nice touches by Vanessa Bell. The original books were sold after Leonard Woolf died in 1969, but they have been replaced with volumes from the same period. 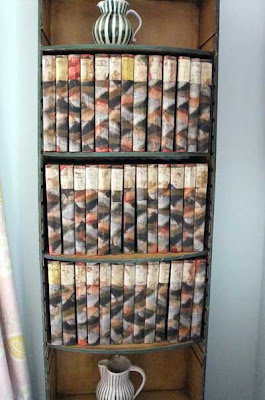 Apparently, Woolf decorated the spines of these books as a displacement activity when she was feeling at a particularly low ebb. 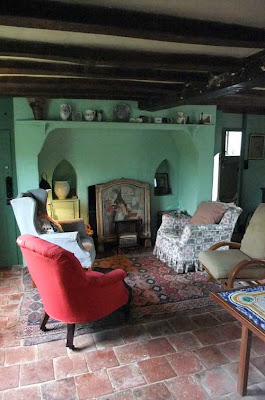 The sitting room looks very cosy, with many appealing touches by various members of the Bloomsbury Group. 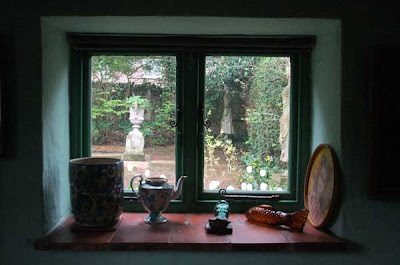 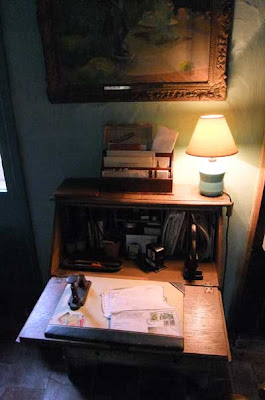 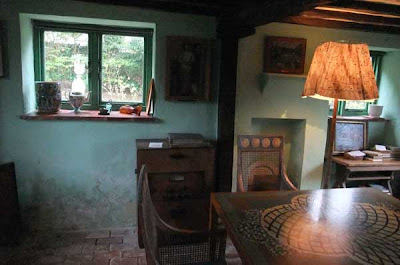 The large object to the left of the chair is a radiogram, with one of those wonderful dials that lists places around Europe: Luxembourg, Athlone, Paris, Budapest. Woolf was no stranger to the radio and made this recording for the BBC in 1937.

The photograph below is of the dining room, which is rather small for the social milieu of the Woolfs. These chairs have supported many famous bottoms, including TS Eliot's, EM Forster's, the Bells' and Roger Fry's: 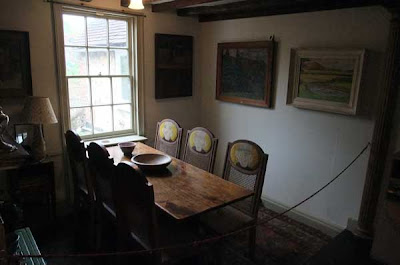 The painting on the right is by Virginia Woolf. It's competently executed, but she clearly didn't possess her sister's artistic talents.

To coin Doctor Johnson's quote about the Giant's Causeway, on its own merits, Monk's House is worth seeing, but not worth going to see unless you're a Virginia Woolf fan or live within a 30-mile radius. If the whole house was open, it would be a different matter.

Fortunately, the creative powerhouse of the Bloomsbury Group - Charleston - is only a few miles away (Virginia regularly walked across the Downs to visit her sister Vanessa there), so it's possible to combine the two in half a day. Ideally, if you're fit and weather's good, you can walk from Monk's House to Charlestone via Southease and Firle Beacon.

I've been to Charleston several times and would strongly recommend it to anyone. The rooms are stunning and the guided tours are the most interesting I've been on. There's also a rather nice teashop that serves homemade cakes - a definite plus point.

For more information about opening times, this link takes you to the National Trust page for Monk's House whilst this one is for Charleston. 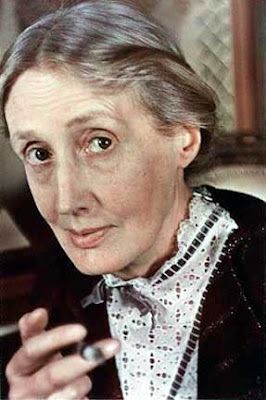 N.B - Since publishing this post, I've realised that I failed to mention the beautiful parish church in Berwick - only a mile east of Charleston - which was decorated by Vanessa Bell and Duncan Grant. No visit to Monk's House and Charleston would be complete without a brief detour to Berwick. For fans of the moving image (and middle-aged men wearing floral, metrosexual shirts), this video contains a beautifully-shot five-minute film of Monk's House, complete with marimba music.
Posted by Steerforth at 8:13 am

Thanks for this wonderful little tour! I'm a big Woolf fan, and would love to visit one day, but it likely won't be soon, so seeing this made my morning.

Glad you enjoyed it. The credit partly goes to the very nice staff at Monk's House, who let me take as many photos as I liked.

thank you! I adore both Virginia and Vanessa. Had no idea they lived so close. Never seen any pictures of Monk house. oh, maybe not as glamorous as her sister's place, however it is within these walls that she breathed and wrote and thunked. LOL.

I am thrilled to vicariously see the rooms and gardens. wonderful post. am booking my flight now....

Lucy - I should have mentioned the church too - only a mile east of Charleston, it's an inspiration.

Thanks for the link (how do they get so many comments?!)

Suki - It is strange seeing the very spot where she wrote, looking out at the view that greeted Woolf every time she looked up. The good thing about going on such a gloomy day was that I had the whole place to myself and didn't have to listen to any self-appointed experts wittering on.

I believe Ravilious used to stay quite close by with Peggy Angus but they weren't friendly with the Bloomsbury set. It looks wonderful, a good use of a rainy day.

I believe Ravilious used to stay with Peggy Angus quite close by but the two grous weren't on friendly terms. Excellent use of a wet day.

Charleston is one of my favourite places on earth. I love Monk's House too, being a great Woolf fan as you know and I've always envied the writing shed. Wonderful pictures you've taken x

Wonderful stuff, thanks for sharing :o) Wow though, that's a scary looking statue in the first picture! Is it as terrifying in person?

In my obsessive way, I became fixated by the doorhandle on the writing room door. I bet trillions it is not the one Woolf used. It looks v cheap and nasty. I wonder what could possibly have been the reason for changing it. Lovely pictures and post I should hasten to add.

Lovely, what a treat. Thanks!

I must get along to Monk's House and Charleston, one day soon. You've really whetted my appetite with this post.

It may be because I'm a northener and rain is in my bones, but I really think English gardens look their best in the rain - all that lovely green...
This was such a lovely entry. Thank you. AnnaC

I wonder if Virginia would have wagtched Flogit in the afternoons when she was depressed?

Lovely photos! I'm a huge fan of the Bloomsbury Group's colourful style and try to copy it wherever I can - but I do hope I have a better attitude towards the lower classes.

Desperate Reader - I can imagine that Ravilious wouldn't have got on with the Charleston crowd. He was a pure artist, whereas they were gifted bohemians who created art, the sum of which was greater than its parts. I love Charleston greatly, but if I had to have something on my wall, it would be Ravilious every time.

Helen - Glad you liked it. A Shed of One's Own doesn't quite have the same ring to it, does it?

Pearl - No, it's not scary at all. I think it's the angle I chose. There's a bust of Leonard at the other end of the wall.

zmck - You're right. It is a newish handle - probably a B&Q zinc-plated range called something inappropriate like 'Viscount' or 'Blenheim'.

Martin - You're near enough to make it worth the journey, if you combine the three places. But in spite of my post, I'd pick a sunny day as Charleston's garden is a feast of colour.

Anna - The southeast is in my DNA, so I'm not a huge fan of rain, but after the last few months I've learned to appreciate it. There's something magical about dew-soaked grass and damp, ivy-clad walls.

Mike - I think Virginia would have been more of a Countdown fan, getting depressed if the contestants came up with longer words.

Nilly - Yes, that's my issue with Woolf - a free thinker and modernist in so many ways, but still very conventional when it came to the lower classes. She wrote something that suggested that working class soldiers in World War One didn't suffer as much because their sensibilities were less developed!

Might I recommend, To The River by Olivia Laing, a Woolf obsessed exploration of the Ouse, just out in paperback. It's very good.

Great photos, thanks for sharing. I just finished reading Orlando. So good!

I see you got there before me! (Two years ago almost to the day). I have lived in Seaford for 8 years and am an NT Member but never got round to visiting it for years. Your post has some interesting comments on it hasn't it.