When I told someone that I spent this afternoon with my mother watching Hue and Cry, I couldn't understand why they looked so perplexed. Then the penny dropped. No, I explained, not the mid-80s Scottish pop duo. I was talking about the 1947 British film that is generally recognised as the first Ealing comedy: 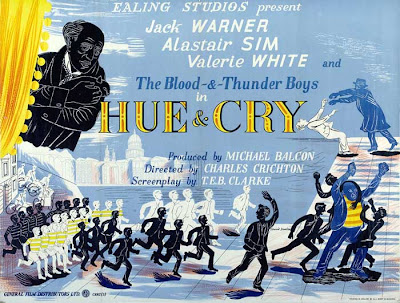 My mother and I watch a lot of Ealing films together. She loves them because they give her the opportunity to revisit her the world of her youth. I love them because it beats listening to her repertoire of six anecdotes about other people's illnesses, which are repeated on a never-ending loop. Instead, we sit together in a companionable silence.

Hue and Cry may be the first Ealing comedy, but it is also a children's thriller, inspired by the wonderful Emile and the Detectives. The plot is simple enough: a teenage boy discovers that a children's comic called 'The Trump' contains secret messages aimed at London's criminal underground. Ridiculed by the authorities, he decides to tackle the criminals himself, aided by a gang of local children. 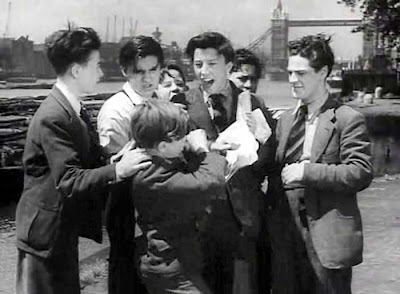 The intro sequence is one of the most imaginative I've seen from this period and captures the film's fun, knockabout quality:

(Sadly, since writing this post, the film's current distributors have had the clips removed from YouTube on copyright grounds. It seems a bit of an own goal, as the clips were effectively encouraging people to buy the DVD)

The star of the film is Harry Fowler (centre), who died earlier this year. 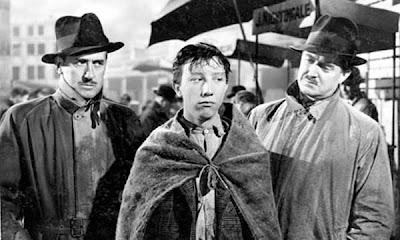 I didn't recognise the young Harry Fowler, but this face should be familiar to anyone who watched British television during the 1970s and 80s: 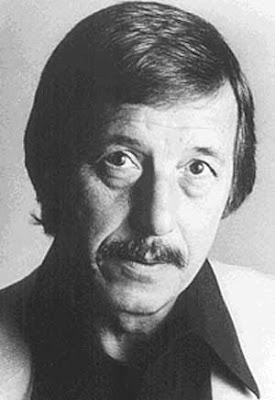 Although the film poster billed Jack Warner, Alistair Sim and Valerie White as the stars of Hue and Cry, Fowler outshone them all. His performance as Joe Kirby fulfilled the promise he showed five years earlier as the cheeky cockney boy, George Truscott, in Went the Day Well?

It's a pity that Harry Fowler ended up playing bit parts in series like Minder and The Bill, as he was a first-rate actor who deserved more starring roles.

The other star of the film is, arguably, London itself. Unlike many films of this era, which portrayed an undamaged, prewar city, Hue and Cry shows a war-scarred London of bombed-out houses and empty streets. It is easy to see how the War bankrupted Britain, leaving it with an economy that would take 40 years to recover.

But it's not all about bomb sites. One of the strengths of Hue and Cry is that it gives a panorama of postwar London, with just as many scenes shot in the West End, Convent Garden and Hampstead. While I was watching the film, I occasionally stole a glance at my mother and saw her delight at seeing her London. It isn't the past that's a foreign country, it's the future. 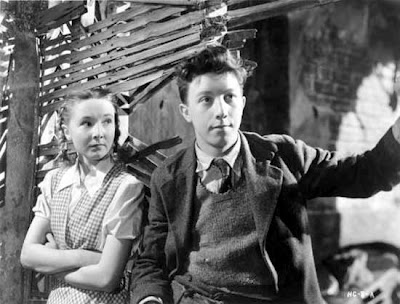 The girl in this scene was an actress called Joan Dowling, who went on to marry Harry Fowler in 1951. She made a dozen films in six years, but in spite of this success she was, allegedly, bitterly disappointed by her career and in 1953, committed suicide.

As for Alistair Sim, although he gets top billing, he only appears in Hue and Cry for under ten minutes. But what a ten minutes! I was very tempted to create a YouTube clip of Sim's performance, but this would spoil the film for anyone who hasn't seen it.

On the subject of spoilers, I should stop now.

You may be wondering why I'm reviewing such a well-known film, but the truth is that until two weeks ago, I'd never heard of Hue and Cry. Have I been living in a bubble, or is it relatively obscure compared to Ealing comedies like The Lavender Hill Mob?

As far as I'm concerned, Hue and Cry is a masterpiece. Apart from being a fun, life-enhancing comedy (much funnier than The Titfield Thunderbolt), it is also a fascinating social document with some stunning cinematography that is worthy of the best film noir. Discovering it was an unadulterated pleasure. 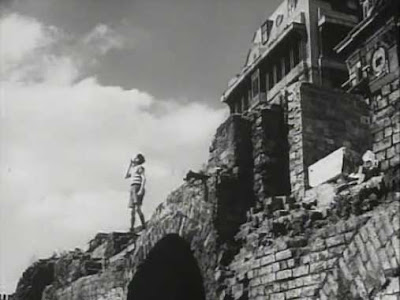 Posted by Steerforth at 5:47 pm

I just remember Fowler as the spiv in "The Army Game". Must look this out - it's wonderful. Love the titles.

A pal just directed my attention to "Black Books," which I presume you have some familiarity with. We are both Americans; he spends some time literally just around the corner from the Russell Square exterior locations used in the show every year and this past summer I joined him there.

He came across it via Netflix.

Anyway, I can't visualize what your take on the show would be or if it is something you would be motivated to write about, but if it tickles your pen, I'm sure we'd both be interested in your thoughts.

Rog - I think that's the problem with Fowler - he became stereotyped as a chirpy cockney/spiv and perhaps people didn't appreciate what a great actor he was. Having said that, he didn't seem to have any trouble finding work.

mwhybark - I loved 'Black Books', particularly the 'Goliath Books' episode. I'd have to watch the whole thing again to refresh my memory (any excuse).

Ooh, I've not heard of this one! Interestingly, as you were talking of Harry Fowler being the cockney kid in 'Went the Day Well', I was convinced you were wrong and that it was George Cole but then realised I was getting confused with 'Cottage to Let' which also has Alastair Sim in it and in which George Cole plays the cockney evacuee. If you've not seen it (it's set in Scotland, not London), it's pretty good even allowing for John Mills' hugely overacted and scene-chewing death!

"Went The Day Well" - another fantastic old film. Though we are post-war baby-boomers (apologies to everyone for THAT), Mr N and I watch it once a year or so. We must add "Hue and Cry" to our collection - thanks for the reminder.

Mid century films set in London were taste of escape when I was a kid growing up in Hell-on-Sea, North Wales, they were so exciting and fascinating - everything from 'Kid for two Farthings' to 'London Belongs To Me' - 'The Servant' - 'Darling' and of course - 'It Always Rains On Sundays' but probably Passport To Pimlico' and 'This happy Bree' were the best. Of course... reality was somewhat different.

One of my favourites, Steerforth, along with Passport to Pimlico. But I agree, Harry Fowler is superb in Hue and Cry. A landlord of a Cornish pub once told me he had been best pals with Fowler in his youth. Impossible to verify, but I can't think why anyone would make it up.

Mrs Jones - I have 'Cottage To Let' on standby, ready for next time. Another good George Cole film I saw recently was 'My Brother's Keeper'.

Nilly - 'Went the Day Well' makes me feel terribly English, but in a good way. I'm not surprised you watch it so often.

Richard - I think that any film made before you were born has a magical appeal, but in the case of mid-20th century films, it's a world that is so familiar because it's our parents' world. I almost feel as if I lived through the Blitz, hearing so much about it from my mother, so the Ealing films feel both comfortingly familiar and strangely alien.

Martin - Why would anyone make up an association with a relatively unknown actor, unless your landlord thought that Harry Fowler was a more plausible lie than Charlton Heston? I was once kissed by the man who ordered the Waldorf salad in Fawlty Towers (I'd given him a free book) and he said "Now you can tell everyone that you were kissed by the man who ordered a Waldorf salad in Fawlty Towers". Unfortunately, I forgot to tell anyone (until now), but who'd make up an anecdote like that?

Oh, and I have met Charlton Heston, but never my real hero, Leslie Phillips.

Cottage To Let has a special place in my family history. My father (about six years old) was in the cinema when a trailer for the film came along. Delighted to show off his reading ability, he bellowed "COTTAGE TOILET!" My lovely grandma was more than a little discombobulated.

I've met Charlton Heston too,even had a crush on him during my school days.

But I was very disappointed when he became president of the National Rifle Assoc. with all its attendant ultra-conservative right wing policies. The group has made a big impact on US life and politics -- and not always in a good way.

He was a good actor though, and it was sad to see that he finished up with Alzheimer's in the end.

The Titfield Thunderbolt was indeed a disappointment. I look forward to seeing Hue and Cry in due course.

Tim - I was going to write "Out of the mouths of babes", but that seems unsavoury too these days.

Chickadee - Yes, a great disappointment. In his films, Heston was always a voice of sanity in a mad world. In the real world, he ignored the fact that countries with stringent gun control laws have drastically lower homicide rates and spouted a lot of nonsense. But I still like him.

Laura - I'm glad someone else didn't laugh at The Titfield Thunderbolt - it was so tame (or as my son would say, lame). Hue and Cry is in a different league.

Also check out 'The Spy in Black', a Powell & Pressburger film with Conrad Veidt, again set in Scotland. Ooh, also 'Green for Danger', directed by Sidney Gilliat, which, again, has Alastair Sim (playing a semi-comedic role as a police inspector) but also Trevor Howard. Yes, I spend FAR too much time watching Film4 and was devastated when The Lovely Husband got rid of Sky because it meant having to give up the TCM channel!

Oh, oh - just thought of another. Not British but post-war America (1952), 'The Thief', where Ray Milland plays an American nuclear physicist trying to pass secrets to the Russians. However, the entire film is without dialogue, just ambient sound. I think there's music but it's been a few months since I've seen it so I can't recall. To be honest it's a little slow at times but it's such an oddity - and shows what a great actor Milland was - that it's worth seeing it.

Where did you get a copy from?

Mrs Jones - Thanks for the recommendations. 'The Thief' sounds fascinating. I love post-war American films too - the contrast between Britain and the US in the 1950s is striking because, I suppose, the War destroyed one economy but boosted the other. Sadly, I can't get my mother to watch anything 'foreign' unless it's from Australia or New Zealand, so I can see us exploring the entire repertoire of Ealing films.

zmkc - Our copy was borrowed, but I expect it was bought here: http://amzn.to/JQaREi

Oh wow! Great post. One of my favourite topics, but I can't believe that I haven't seen Hue and Cry yet. I will correct this as soon as possible. I'd like to add that Passport to Pimilico also has many interesting scenes of war torn London - one of the subplots concerns Stanley Holloway's dream of a community facility on a local bomb site.

The lovely Valerie White plays a great villainess in HUE AND CRY and THE BLUE PARROT , but my favourite of her films that I have seen so far is, THE HALFWAY HOUSE . I would recommend them all to you black and white film fans out there!

In fact actor harry fowler cheated on his. Wife Joan and she killed herself after that happened age 26