The Sacred and the Profane

I'm now on Twitter. I resisted for several years but finally gave in a week ago; partly out of curiosity, but mainly because I was beginning to feel like a Luddite. After a few days in the Tweetosphere, I now realise what has happened to those bloggers who became increasingly quiet during the last couple of years.

I can see the uses of Twitter. A journalist friend of mine loves it, as he can canvas opinions, publicise interviews and shamelessly network. By the time he arrives at his desk, he has rubbed shoulders with thousands of fellow Londoners, checked out the latest business news and caught up with the trade gossip. By the time I arrive at my desk, I have passed a dead badger and wondered why people are now saying "Back in the day".

I'm not sure if I'm suited to Twitter. Sometimes it feels as if I'm at a party and although many of my favourite people are there, it's not quite working because I have to shout to make myself heard. It feels very ephemeral - a sometimes exciting, but an all-too-brief encounter, compared to the enduring relationships of the blogosphere. Perhaps I just need to give it more time.

One thing Twitter is very good for is posting amusing book jackets: 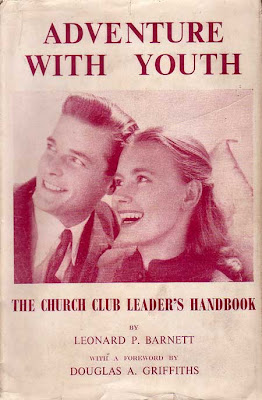 It sounds quite exciting and the couple in the photo look very animated, but a big bucket of cold water is thrown over the whole thing with the authors' names: Leonard P Barnett and Douglass A Griffiths (just so we don't confuse them with all the other Leonard Barnetts and Douglas Griffiths's).

There's certainly no adventure, unless you include trying to cop-off with someone under the disapproving glare of Leonard Barnett.

But if you're worried about young people falling under the spell of pop music, with its lustful rhythms and licentious lyrics, here is the answer: 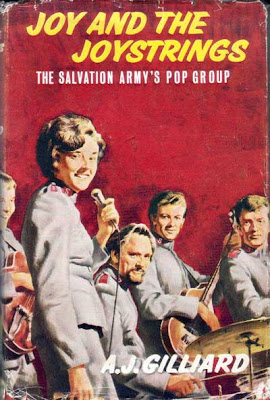 As a bookseller, I missed out on the subgenre of novels related to the Salvation Army rock scene. Ignore it at your peril. 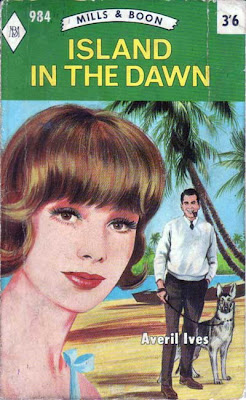 After church youth groups and Salvation Army pop concerts, marriage is surely inevitable and doesn't every young woman dream of a pipe-smoking, alsatian-holding man in a v-neck pullover and sta-press trousers that glow in the dark?

Look at him. He's every woman's fantasy: 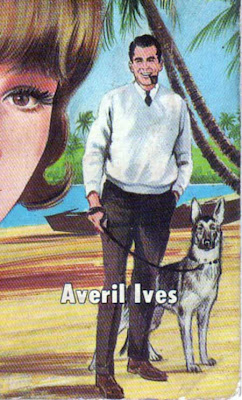 I expect he has a lint-covered Murray mint in the deepest corner of his trouser pocket and a young male lover in the youth branch of the Bible Study group, but Avril won't know this until she's tidying out his wardrobe and discovers the gymnasium photos.

Bitter and disillutioned, Avril will put her old life behind her and embark on a new voyage of discovery: 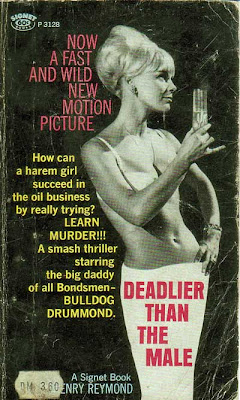 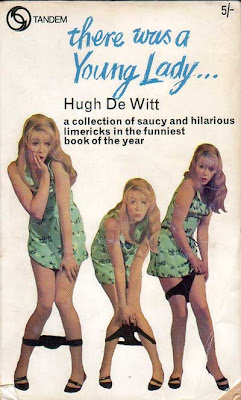 One of the least-offensive limericks goes as follows:

There was a young lady of CheamWho crept into a vestry unseenShe pulled down her knickersLikewise the vicar'sAnd said: "how's about it, old bean?"

As far as I know, there was no reprint.

As I've commented before, between the Lady Chatterley trial and the advent of AIDS, the media world appeared to have been obsessed with sex. Even classics weren't exempt: 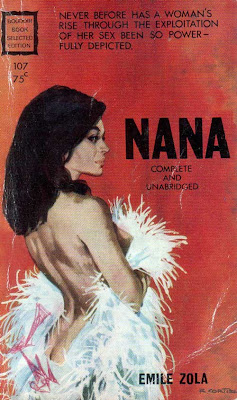 Published as part of the 'Boudoir Book Selection'. I love the way it says 'COMPLETE AND UNABRIDGED', implying that some very saucy bits have been left in. I wonder how many people bought this book in hope of some titilation, only to find themselves being lectured about political corruption during the reign of Louis Napoleon?

Finally, a novel which may strike a chord with zombie fans: 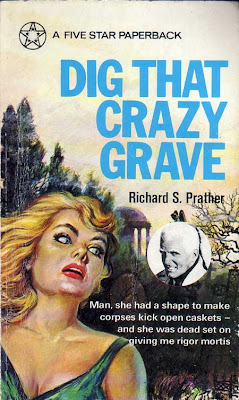 "Man, she had a shape to make corpses kick open caskets - and she was dead set on giving me rigor mortis".

I can't think of anything to add to that.

Posted by Steerforth at 5:26 pm

I'll be sorry to see you leave blogging for the twitter-verse. Is it a 'verse' or a 'sphere'? I intend on remaining a Luddite myself as far as twitter is concerned.

And I can't think of a comment to make make on this fantastic and funny post! Here's hoping you don't completely abandon the blogosphere.

What a good laugh, I needed that. Cheers.

Twitter is something I can take or leave, I'm not very good at having 'conversations' on there, but I have found it to be a great way to muscle in on otherwise unapproachable people/organisations.

There are lots of ten minute slots throughout the day which can't be filled with anything constructive, I think this is why Twitter is so popular.
As with Facebook, (which I never joined, but have witnessed) there are an alarming number of people who deem it necessary to narrate the minutiae of their day in real-time. "Coffee and toast...mmm"

I'm guilty of doing the same with my blog, I don't share anything remotely useful.

Has any book or film described as 'hilarious' ever been remotely funny? I doubt it. That limerick book would be right up David Cameron's street, I bet.

The guy with the pipe looks a little bit creepy. The type of guy who blows hot and cold - buying everyone drinks and telling funny stories one minute, weeping about the premature death of his nan the next.
Yes, he reminds me of a friend's ex. Minus the pipe, a dead ringer for Jason.
Jason went to prison for beating up a guy who made the mistake of "looking at him funny".

I do go on, sorry. 140 character limits should be imposed on my comments.

Hi,
I've written to you a few times regarding how much I love your blog, and especially your writing. Just wanted you to know that I quoted you on Facebook, so please don't sue me. The quote is:
“On the subject of Robert Rankin, I once had an embarrassing exchange with a middle-aged woman who'd asked what I'd recommend for her 17-year-old son. When I said ‘Has he tried Rankin?’ she misheard me, but to her credit didn't bat an eyelid and replied ‘Well, I suppose that would keep him quiet.’”
HILARIOUS.
As a former bookseller, I can relate.
Also, I'm following you on Twitter now (Illustrated Word.) I was reluctant to enter into all of these social media ventures as well, but my view has softened. Gotta pick your battles, I suppose. Anyway, welcome to the Twittersphere, and thanks as always for your wonderful, and amusing words.

You really should have a column in a newspaper. Great stuff.

C.B and nilly - Twitter won't make any difference to my blogging because I think they occupy completely different realms. I think that Twitter's very urban (and urbane): fast, witty and 'zeitgeisty'. I can imagine tweeting regularly when I used to commute to work on the District line, but I spent most of today on a farm, listening to birds and dogs.

Lucy - Facebook has its uses, but yes, I could do without the lunch updates. Luckily, you can block the posts by your dullest 'friends'. I like it for the messaging facility and the YouTube clips.

Donna - Thanks. I've just 'followed' you as well. Thanks also for quoting the Rankin anecdote on Facebook - the more people who hear it the better. I still can't get over the woman's lack of embarrassment. When I told her that I'd actually said Rankin and wouldn't have said the W word in a million years, she still seemed completely unfazed.

Thanks Kid - I'd love to write a newspaper column, particularly one of those ranting, Daily Mail-syle types, where ignorance of the subject is almost a virtue. I have a long list of subjects I could write about before they sacked me.

I too hope you won't stop blogging now that you've discovered Twitter. This post is the most interesting and amusing thing I've read in ages! :o)

But that pipe-smoker looks a bit like Fred MacMurray in All My Sons and, aged about six, when I saw that programme on the television at our neighbour's, he became my template for a perfect husband, replacing Harold Macmillan and Alec Douglas-Home: the template was further refined when I first clapped eyes on James Stewart (to my great disappointment, several - or even many -years after he was already dead.)

I gave Twitter a whirl, and couldn't get on with it. However, after much resistance, I finally signed up for Facebook, and was pleasantly surprised. Blogging is rather like visiting someone at their home, whilst Facebook is much more akin to bumping into someone in the street and catching up. It might not be a bad thing for Steerforth Books to have a page?

You do know that the Joystrings were real, don't you? http://en.wikipedia.org/wiki/The_Joystrings
So I doubt that's a novel, more likely a haloes-and-all biography. My grandmother, who was in the Sally Army all her life (until, in their phrase, 'promoted to glory'), was delighted that there was a respectable pop group to challenge all those hairy oiks.

I'm glad to see Rankin get a name check. I published his first 6 books, at 3 different publishers (in fact I published his first three twice). Unlike an awful lot of writers I 'discovered', he's still going and still successful, which is a relief. A lot of them were never heard of again...

I'm sure you'll find that Twitter becomes useful to publicise Steerforth books, new stock etc. I mainly use it to get more blog traffic.

Speaking of Limericks, I found the I'm sorry I haven't a clue limerick book in a charity shop some time ago, but haven't looked at it yet. I bet there are some great clean but dirty ones in there!

I'm on Twitter too (@sazen) but don't do much on there. I got bored with it, to be honest.

I almost mis-read Joystring for Gstring. That would have livened things up!

I would give my left nut to hear a Joy and the Joystrings album.

One must wonder about a man who chooses a shirt, tie, pull-over, dark trousers and leather shoes for a stroll on a tropical beach. Lord knows what he's wearing underneath it all.

Did your account get suspended? How so? Hope you come back - I hardly had a chance to say hello!

Tried to follow you but it says you're "suspended" - what have you been up to..?

It's a mystery. I posted another tweet about Joy and the Joystrings and sent someone a message. I've been through Twitter's list of don'ts and don'ts, but I can't see what I've done. It's very odd.

Perhaps some Joystrings fans have complained. I've appealed, so unless Twitter is terribly Stalinist I'll be back for my one tweet a day.

Thomas, for their music, see http://www.youtube.com/watch?v=VyfjPuw04Ps