The Origins of Derek - Part One 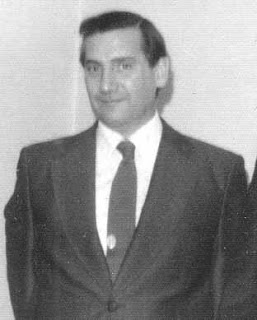 About a year ago, a strange consignment of books turned up at work, stored in a large cage - the type that Hannibal Lecter was incarcerated in during the opening scenes of 'Silence of the Lambs'. Within the hour, someone from the warehouse marched up to my desk and told me that I needed to sort through the stock that day or else it would be thrown away.

I don't like going down to the warehouse. My workplace is like H.G. Wells' 'Time Machine', with the Eloi working in comfortable, air conditioned offices, whilst the Morlocks occupy a noisy, dark, subterranean complex, full of large machines. I feel guilty that I have a comfortable swivel chair and can come and go as I please without clocking in, but the survival instinct is even stronger.

I promptly donned a hi-vis jacket and made sure that I was armed with a bright light (flaming torches set off the smoke alarms).

The selection of books ranged from the sublime to the ridiculous. There were many historical and literary titles in immaculate condition, but also a number of bizarre books published by small presses, most of which asserted that the Earth was only a few thousand years old. One claimed to have conclusive evidence that humans and dinosaurs co-existed.

At the time, I had no idea that I was looking at Derek's book collection.

I wish I'd had more time to peruse Derek's library, but we were under pressure to clear the space as quickly as possible and had to make snap decisions about what to keep. Towards the bottom of the cage, someone found a box full of foolscap folders and called me over to have a look. To my amazement, there were thousands of pages of typed and handwritten A4 sheets, plus a few exercise books - a diary of someone's entire adult life, spanning a period from the early 1950s through to the 1990s.

"Chuck it?" I was asked. Horrified, I shook my head and said that I needed to know more about the contents. They were sent up to a storage are in the warehouse, where I thought that the diaries would be safe, but a few hours later I noticed that a box was missing. I quickly moved the remains and took them to my office.

Later, during a quiet moment, I started to read the contents and realised that I had found something wonderful. But what should I do with Derek's diaries? Simply keeping them wasn't much better then throwing them away. These diaries were written to be read. 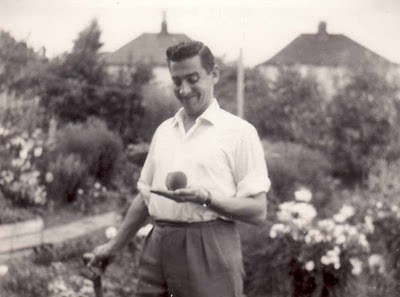 In my last entry, I wrote about the moral dilemmas of blogging and in the case of Derek's diaries, I have often wondered about the ethics of publishing someone's private papers. However, I feel quite certain that faced with a choice between seeing his life's work pulped or having extracts published on the internet, Derek would have chosen the latter.

But rather than speculate, let's hear from Derek himself. In 1980, he typed up his first journal from 1955, adding footnotes and this telling preface:

"My early journals, and the later one some people might declare, make me squirm when I read them now. They are full of self-pity, mawkish sentiment, selfish opinions, and abysmal writing. Were it not that I truly believe that "the child is the father of the man", in that the person I am now is a sort on omnibus composed of many pieces bought forward from that stumbling past, I would confine those journals to the fire without any compunction. But we all of us like to brood upon beginnings, seeds sown, passions formed, the foundations of character and personality, and I am no exception to that rule.

When I am going through a period of self-examination, especially my faults, I strive to trace what I find within my inner depths to original seeds. This is profitable in conveying lessons to others. Knowledge by experience is of far more value than any wisdom gained from books. So, though my journals are full of many weaknesses, perhaps there are unobserved lessons in them that will help others, particularly my posterity in the days that lie ahead."

Posterity is a word that Derek uses frequently, but it isn't a reference to a nebulous collection of people in the future. For Derek, posterity means his descendants:

"As to that posterity, I hope they will not think me the worst of their ancestors. I am arrogant; but I see my arrogance and am always quickly repentant of it. I am foolish, too. By this I mean that I have a sense of humour that often gets out of hand and manifests itself in stupid speeches and foolish remarks, many of the out of place. On occasion I also play practical jokes, many of them of a literary ilk. At the same time it is a sense of humour that has enabled me to pass through many dark places and to observe the desparate side of funny situations.

If any legend goes down to my posterity concerning the man I was, it may well be the fact that I loved to collect books, even to the detriment of the welfare of my family on occasion. At the present time I have about four thousand volumes about me; I cannot pass a bookshop without pausing to browse."

I'm glad that Derek never knew that his 'posterity' would one day consign his diaries and the beloved book collection to oblivion.
Posted by Steerforth at 9:01 pm

What I've read of Derek's diaries, has been fascinating. So glad you ventured underground to perform a valuable rescue service.

Your blog has become one of my favourites.

Derek's words were wasted on his descendants indeed (unless of course some ghastly fate befelled them all to leave no living soul left to treasure and remember him.)

Thank goodness real posterity came to the rescue. I am sure the only thing which would perturb him would be such casual dismissal of a life's work by his family, and he would be delighted by his late blog fame.

If my own family are anything to go by, I think it's often possible to be treasured far more by good friends and appreciate readers, so I don't set much store by blood ties.

"I'm glad that Derek never knew that his 'posterity' would one day consign his diaries and the beloved book collection to oblivion."

I'm glad, too, as glad as I am that you rescued them.

And, if I may add a personal note, as glad as I am that you are the type of person to take the trouble to rescue them.

I think the very fact that Derek bothered to type up his diaries confirms that he hoped they would find an audience. Yes, well done you for being imaginative enough to do something with them, and of course value them in the first place.

Derek was quite a looker, wsan't he? No wonder he had so much trouble with temptresses. It seems part of his tragedy rather than a bonus though... I get the impression he found being handsome quite difficult and incompatible with his religious feelings about chastity and co. Does that sound right?

Yes, Derek does come across as a passionate man who sometimes struggles to control his emotions. The two dreams that I quoted in the first Derek post are very telling.

Thank you Martin, Gill, Laura, Christine and Junie. I'm so glad that Derek has finally found the readership he deserved.