I have just returned from a week in Normandy that has opened my mind and hardened my arteries.

After a fruitless search on the internet for a gîte, my four-year-old son managed to find one for us (his social networking skills are already far superior to mine) via a friend at nursery school. It was both cheap and, more importantly, in an idyllic setting.

This was the view from our bedroom window: 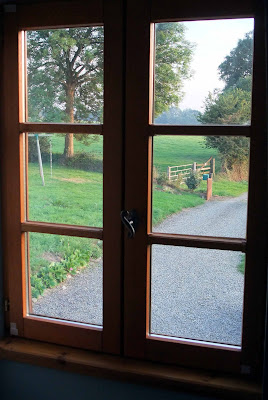 Admittedly, you have to like the sounds of church bells, cows mooing and the scuttling of harvest mice in the rafters at night to fully appreciate this gîte. There were also rather a lot of insects. However, in between the bells and the moos, it was incredibly quiet.

I'll refrain from a dull travelogue. I visited the usual tourist sites: Mont St Michel, Bayeux and the D-Day beaches, including the remains of the artificial harbour at Arromanches: 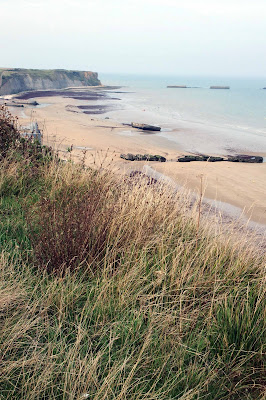 I also discovered some beautiful churches, many of which were eerily quiet. In spite of its town centre location, the Eglise Saint-Pierre in Coutances was completely deserted: 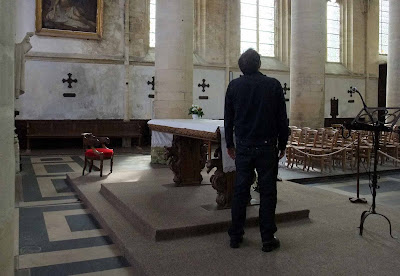 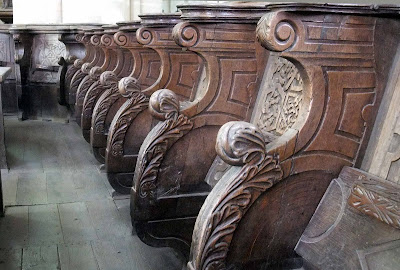 As for Mont St Michel, it was depressingly commercialised, with a mixture of countless gift shops selling hideous souvenirs and overpriced cafes staffed by surly waiters. At 9.00 in the morning it was tolerable, but by 11.00 the narrow alleys were packed with people, all pushing in different directions. On my way out, I saw a forlorn-looking woman sitting in a wheelchair, abandoned by her companions.

But in spite of everything, it was a magical place that, like Venice, made me feel as if I had stumbled into a fairy tale. The view from the top was particularly awe-inspiring: 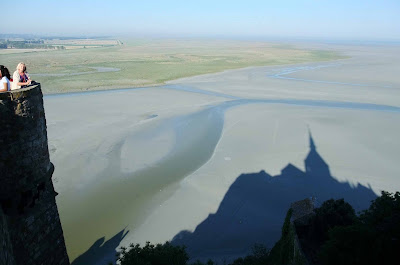 But what impressed me most of all was Normandy itself. It wasn't just the beautiful landscape, empty roads, lack of police cars, rich history or absence of fat people (how do the French maintain their figures on red meat and cheese?) that appealed. It wasn't even the fact that in today's so-called globalized age, hardly anyone spoke English. I think what I particularly valued was the different attitude to living.

President Sarkozy has repeatedly urged the French to become more like the Americans and British, but it we who should be more like them. We should close our shops on Saturday afternoons, take long lunches, drink red wine, have affairs, discuss philosophy in cafes, go on strike, wear Printemps instead of Primark, take our children out to lunch, subsidise unpopular art and start smoking again.

I have been back for less than a day, but I've already booked next year's trip.
Posted by Steerforth at 7:56 pm

"(How do the French maintain their figures on red meat and cheese?)"

Having just returned from a week's holiday in Montreal, Canada, I must respond by saying: when you find out, please, please let me know.

Yours sincerely,
A Steerforth Devotee

I've just weighed myself - I've gained 3lbs in a week, so it hasn't worked for me. Perhaps I should start smoking Gitanes?

Sounds like you had a lovely holiday. Glad to read your post; I too have been a Steerforth Devotee.
Canadian Chickadee

We stayed in a gîte in Tournehem-sur-la-Hem 13 years ago, and returned feeling very much the same. In fact, it was such a magical holiday, we've resisted a second visit, for fear of disappointment. Does that sound weird? It might do...after all, I am English.

I am so glad you were able to find a spot that was devoid of fat people like me.

This strangely enough reminded me of Icelandic TV. (Bear with me – this makes sense in my head.) RÚV – which is the Icelandic equivalent of the BBC – begins broadcasting at 4:30 in the afternoon during weekdays and ends transmission at midnight. Weekends and holidays it opens its doors at 9:00 in the morning, though sometimes with midday break. A midday break! I still remember the Intermissions we used to have as a kid, a few minutes when there was nothing going on. Of course they now have satellite TV like the rest of us and the Internet but I remember when I first heard about the country’s broadcasting policy and wondered why they weren’t up in arms. The reason was they had got used to doing other things. Yes, I know there is nothing to stop us turning off our TVs and going and doing something more interesting instead (there used to be a kids programme with a name like that, remember) but we don’t. I turn the TV on as soon as I get up and it stays on all day admittedly with the sound off most of the time; it sits where the family fire used to sit. I don’t, however, have a set in every room unlike some American houses.

France has never appealed to me as a country although I’m sure it looks very nice but I do like the idea of getting away from a lot of the attitudes we revere as Brits that we think are so important. A slower lifestyle is something that definitely appeals. I don’t have a car for example. When I did have one I just crammed more into my life. I zoomed here. I zoomed there. Now I don’t and I don’t miss it. And you’re right, I don’t take my daughter to lunch nearly enough. I should do something about that.

Megan, I knew when I wrote those words that I was running the risk of offending some people, but having experienced weight problems myself and seen my father's life destroyed by heart disease, it's something I feel strongly about.

The current epidemic of obesity has many causes, but at its heart is, I think, a society that is on the wrong track. The stresses of modern life and the unholy alliance of the supermarket chains and food industry are the main culprits.

Why were the people I saw in Normandy conspicuously slimmer? They don't seem to shy away from saturated fats, but perhaps the lack of processed food and a less stressful lifestyle is more important.

What's important is that instead of wagging the accusing finger at anyone who is overweight, we look at the underlying causes.

You're a funny bugger Steerforth. Here am I trying to work out if the enemy is some old school bully, that rival for the hand of your beloved, or one of those office creeps who may have been at your last job.... and here you are swanning around indulging in fine wine and cheese in the French sunshine! We Aussies forget that our forebears still haven't got over the fact that those same French won the battle, the war, and the long term in 1066.
Glad you had a good holiday.

Couldn't agree more about Normandy and have been going there for 20 years - with babies at first, then teenagers and now back to going on our own. Honestly think the secret on weight is not denying yourself anything but keeping portions small and not snacking between meals - have been trying to follow this advice with limited success for decades! If you want another excellent cheap gite in a different part of Normandy try the Kennedy Gite near Carrouges some time.

How strange that the reasons you mention for going to France, are mostly the same reasons I go to England as often as I can manage (apart from the Gitanes that is). Nice to see you had a great holiday!

vivre la france! We are leaving in 3 weeks and i am so sad about it. Thanks for sharing - lovely post

What struck me most when I last returned from a sojourn overseas was what an 'assault' British papers suddenly were on my senses. Suddenly I was supposed to care about footballers cheating on their wives, the lastest MP sleaze, the latest rubbish government decision, the latest outrage on our human rights. It was a real shock to the system. I think there is a lot to be said for living at a different pace and having a more meaningful existence.

Martin, I know exactly what you mean. I've had several magical holidays in places that I'd never dare return to because I know that it wouldn't be the same. But I feel that even if it poured with rain next year, I'd still love it.

Jim, I also remember the days when the BBC didn't broadcast around the clock. I ended up having to read books to pass the time. Terrible! Thank God we now have daytime TV to save us from the tyranny of boredom ;)

Bob - yes, it still lurks in the subconscious of both nations and I didn't enjoy seeing the Bayeaux Tapestry. However, we've got our own back on countless occasions during the last 900 years, so I'm prepared to call a truce.

Deb - the gite looks lovely, but I won't get away with being so far from a beach. I'll have to wait until my children are too old to want to come on holiday with me. Are they taking bookings for 2022?

Caroline - How interesting that the things I like about France you see in England. Vive la différence, I suppose?

Laura - I agree. Perhaps my poor French meant that I was oblivious to their version of the Wayne and Coleen Rooney saga, but somehow I can't imagine their press being as crass.

Oh dear, I've gone native. I shall have to watch a few clips to General de Gaulle to restore my equlibrium.

What a fantastic and relaxing sounding vacation. I'm quite jealous :)

I just love holidaying in France. Our last trip saw us staying in a gite in the Charentes Maritime (an hour south of La Rochelle), in the middle of fields of sunflowers and vines. Lovely. Glad you had a great and slow time.