The Decade That Fashion Forgot? 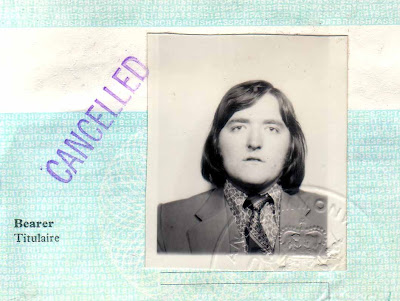 As Frank Skinner once said to Sophie-Ellis Bextor, why the wide face?

This passport appeared in a crate of books yesterday, belonging to a man who worked as a "Sales Exec" - a job description that probably used to be even more ambiguous than it is today ("Yeah mate, I'm in the import-export game, if you get my meanin'").

Only in the 1970s could a suit look so scuffy, but nevertheless this man would have been a style icon for boys of my generation, who thought that when they grew up they'd have long hair, pull birds and drive a Cortina.

I didn't become an adult until the 1980s, by which time punk had put paid to the wide lapels, long sideburns and kipper ties. I felt cheated.

As for "birds", I read The Female Eunuch when I was 17 and was horrified to learn that the seemingly foolproof chat-up lines in The Sweeney were actually offensive to many women. From then on, I vowed to never treat a woman as a sex object.

I spent the next few years at parties watching women go off with men who'd seduced them with quotes from The Sweeney ("Get yer coat luv, you've pulled") while I travelled home alone on the night bus.

Thanks a million, Germaine Greer.

Posted by Steerforth at 6:36 pm

Email ThisBlogThis!Share to TwitterShare to FacebookShare to Pinterest
Labels: 1970s

Hmm, that suit reminds me of my wedding day. Thanks for that. I got measured up for it at John Temple, where all the salesmen bore a spooky resemblance to Peter Wyngarde.

The girls I knew, only wanted to party and have a good time, and my reading of 'The Female Eunuch' was delayed for some years. By which time, it was too late to round them all up and apologise for my appalling chat-up lines. Still, something worked. Maybe it was the Fabergé after-shave?

Ah, but if you want the quality skirt, it doesn't respond to lines from The Sweeney! ;- )

Like you I came of age in the 'eighties... though I was happy, very happy, that punk had put paid to wide lapels. Somehow I knew that in the early years of the 21st century ABC would trump ELP in terms of looks... in much the same way The Lexicon of Love trumps Brain Salad Surgery.

Or am I wrong?

Ideally, the looks of ABC with the sound of ELP (I love a bit of Hammond Organ-based Prog Rock).

In the 70s ‘skinners’ were a style of jeans. Why exactly they were called ‘skinners’ I have no idea because they were, as was the fashion of the time, wide-legged. They also had enormous turn-ups, 5" or 6" and I wanted a pair. I talked my dad into getting me a new pair of jeans but he refused to let me have turn-ups bigger than 1" and I felt such a tube wearing them. The 70s was the only time in my life I ever attempted to be fashionable. When the style changed and everything went skinny my girlfriend bullied me into getting an outfit that was more up-to-date but no sooner did I put it all on than she realised what a mistake she had made. There was no way I could pull it off. I was far too broad. I looked a right tube.

‘Tube’ by the way is a state/condition that my present wife has a standing instruction to watch out for and never to let me out of the house looking like one. Not that she’s exactly sure what qualifies. It also took me ages to get her to say the word right. She an American and wants to say ‘toob’ but that’s so not right: it’s ‘chewb’ and I hate looking like one.

Those wide turn-ups and platform shoes were a lethal combination, esp. on stairs.

Martin - Peter Wyngarde was another influence, until his sad demise in a
gentelmen's public convenience.

On the subject of aftershave, did you wear Hi-Karate?