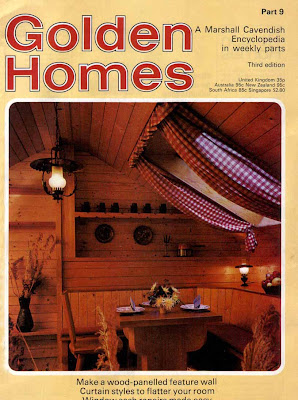 Yesterday afternoon, two wedding photos dropped out of a hardback compilation of a 1970s DIY magazine called Golden Homes. I'm not sure when the photos were taken, but I'd guess the late 1960s.

Here are the happy couple: 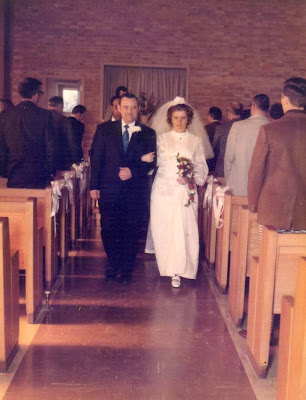 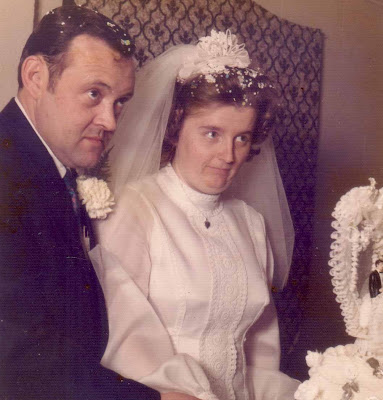 My wife's first reaction to this photo was one of utter horror: "It's her wedding day and she hasn't got any make-up on!"

The bridegroom and bride remind me of my parents who were, to put it politely, an "older couple" and had both given up hope of ever getting married until suddenly, Cupid struck in the somewhat unpromising environment of the National Savings Bank headquarters in Kew. After a whirlwind courtship of four years, my parents got married. I appeared almost exactly nine months later.

I wonder if the mystery couple - let's call them Roy and Mary - actually used their copies of Golden Homes magazine to "improve" their new house and give it a more contemporary look. If they did, here are some of the designs they might have used:

We all know what a wonderful colour orange is for living rooms and it's even better with a few zigzag stripes to add a bit of interest: 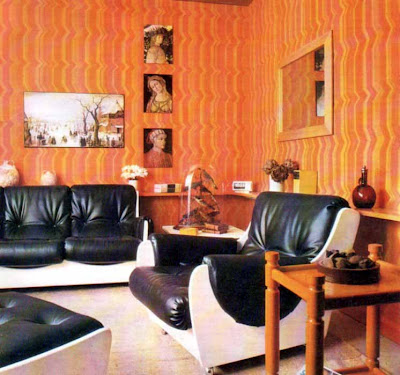 This is just the sort of room you'd want to relax in after a hard day's work and as a counterpoint to the orange, why not add an integrated bookcase and music centre?

This bedroom is probably more suited to bachelor pads, with its Mike Gambit-style dark colours: 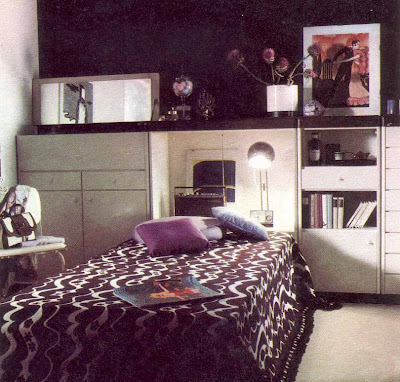 As for the exterior, bricks are so drab. Why not brighten the outside up (and protect your walls from the elements) with this bright, cheery stone-cladding? Lovely. 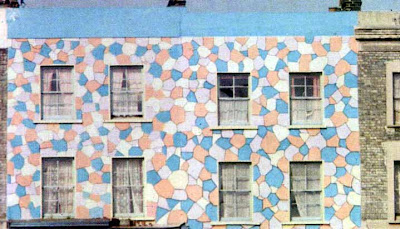 We will never know whether Roy and Mary acted on the advice of Golden Homes, but I like to imagine them reclining in the black leather chairs of their orange living room, watching Nationwide:

Posted by Steerforth at 9:00 pm

Is it not odd that only men appear to have attended Roy and Mary's wedding?

Wishing Mary and Roy all the best.

Many thanks for this morning's amusement.

Yes, that's true about the men.

I agree with Mrs Steerforth. 'Mary' has made a shocking lack of effort considering she's presumably waited such a long time for her 'handsome prince'!

On the basis of this I doubt she would have made much effort on the home front on any level, beyond buying (or more likely being given as a present) the book.

Great ilustrations though. And the orange wallpaper really wasn't the worst of 70s decor.

Then again, people are still stuffing their houses with hideous leather sofas to make them look like doctor's waiting rooms, albeit without the formica bits attached.

They really do as if they're waiting for the next instruction on how to cut the cake!

My mother (bless her) decorated her hall with tangerine walls, complemented by some strategically hung silver wallpaper with a cubist design. Luckily, I didn't need to wear glasses until my forties.

Or perhaps Mary went over the wall to get married and left the convent to do so. My son-in-law's aunt (whose name really is Mary!!) did just that. That would explain the lack of cosmetics for the bride and the presence of mostly males at the wedding. It would also explain the very chaste high necked wedding and the single locket on a chain as the only jewelry.
A great photo anyway. Canadian Chickadee

I think Roy and Mary look like they could be siblings.

I am unfamiliar with Nationawide, but it reminded me of a film I stumbled across recently. It was a 1973 Mike Leigh film called Hard Labour. Apparently it was part of a series called "Play for Today". At first I thought it was just miserable as it showed a very bleak 1970s Britain, but then I found myself enoying its bleak, miserableness. I actually ended up watching it twice.

Oddly enough - I also know someone who went 'over the wall' to get married - quite literally in the middle of the night over the convent garden wall via a ladder used for fruit picking - she's quite the glamourpuss now.

Can you imagine the sinking feeling that Roy felt the moment he first saw his blushing bride and registered that she was buttoned up to the neck - literally... and probably figuratively.

Caroline, I can believe you had curtains like that. I spent several happy holidays in Rotterdam in the late 70s and early 80s and used to love its modern buildings and interior design - my parents Victorian house seemed so drab by comparison.

I'm glad you enjoyed the Mike Leigh. There is something compelling about his early, bleak films and anyone who thinks that the 70s was all Charlie's Angels should watch Mike Leigh!

I was amused to read that Canadian Chickadee and Richard know escaped nuns! I had no idea that it was necessary to literally leap over the wall these days.

We make fun of the '70s, but lots of the current taste is appalling...For example ripping out original Victorian fireplaces and surround and inserting a stainless steel and glass abomination! How about no window dressings or curtains anywhere...Stark white walls and everything artificial. YUCK! I guess this is all a perfect reflection of austerity Britain.

I agree, to some extent. I particularly find the current obsession with recessed halogen lights rather unappealing.