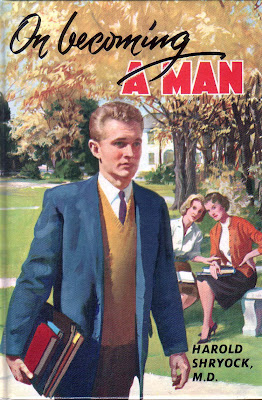 I found a very instructive book today called "On Becoming a Man - A Book for Teen-Age Boys" by Harold Shryock, M.A., M.D., a teacher at the University of Loma Linda in California.

Published in 1951 it is, first and foremost, a sex guide, but has chapters encouraging financial prudence, good posture, regular church attendance and military service.

There is also a stern warning about the dangers of reading fiction, with a fascinating anecdote about a missionary wife who became addicted to novels during a stay in Africa:

"This young woman was not able to take advantage of the opportunity to do a work that would have made her a blessing to humanity - all because she had formed the habit of living in the realm of make-believe as created by the authors of the books she read."

Dr Shryock also takes pains to warn his young readers of another danger:

"There is a freakish manifestation of human friendship regarding which I shall take this occasion to warn you. I refer to those reletionships between members of the same sex that are included in the term homosexuality."

Like some of the Victorian self-help guides that I've mentioned on this blog, "On Becoming a Man" is a curious mixture of sound common sense and the sort of utter nonsense that must have made some of its readers feel completely awful.

On the plus side, it does have some great illustrations: 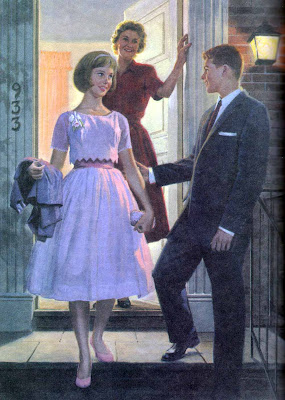 "Any youth is wise who controls his special friendship"
(No they're not. I deeply regret behaving so properly in my youth) 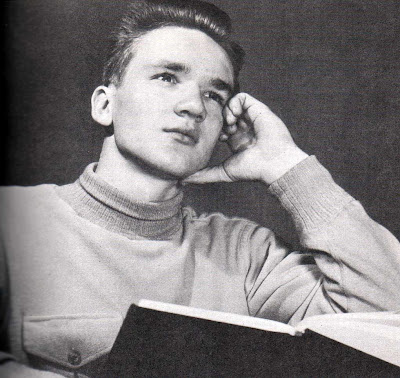 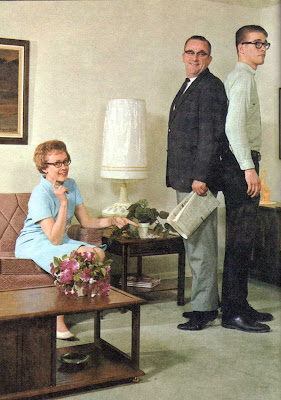 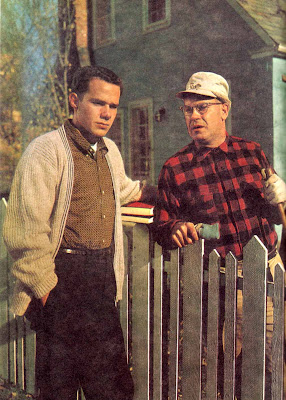 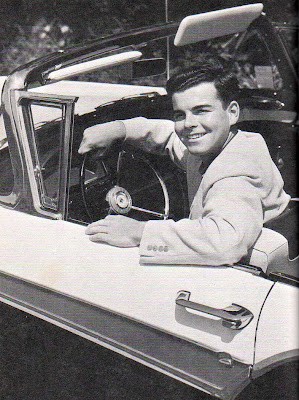 "For each teen-ager, each new venture brings with it a new thrill and a new opportunity"
(Whatever happened to angst and alienation?) 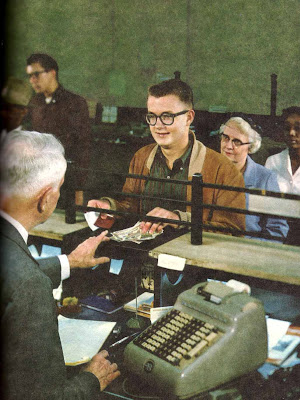 "The habit of saving should be established early in life."
(So that you can blow it in your early 20s on loose women and poker games) 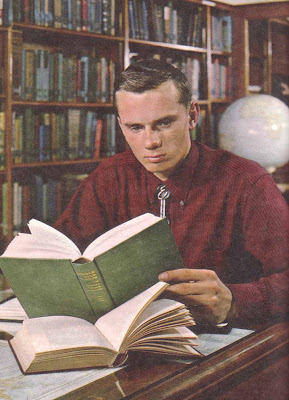 "Reading is without doubt one of the best means of personal development."
(In this young man's case, he's learning how to build a small explosive device)
This photo is from a 1968 reprint: 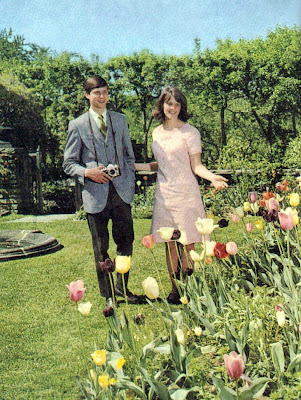 "Jack and Joanne had been special friends for about a year. Because of of common interests, it was natural for them to begin going steady."
(Hopefully a common interest in saucy photos)
If a "teen-age" boy can heed Dr Shryock's advice, then this is the golden future that awaits him: 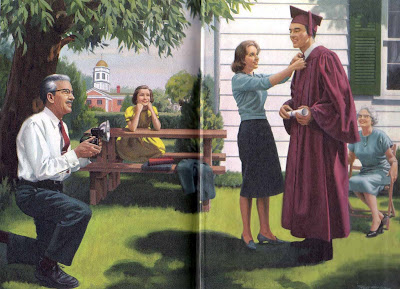 After all these years, I can finally see the appeal of Jack Kerouac.
Posted by Steerforth at 8:15 pm

So that's what happened to the American Peter (and Jane) when they grew up!

Yes I wonder how many screwed up young men with sexual dysfunction from an early age and lobotomies as a result of misdiagnosis of their neuroses Dr Shrylock was responsible for.

Then again sex is always far more fun when frowned upon by authority. I regret being born too late to outrage the likes of Dr Shrylock.

And then there's the great cars which seem to have been handed out to each American teenager upon the dot of age 17 - hell, that's almost worth the time machine to go back for.

I love the third picture, where mum and dad have clearly not yet taken the cellophane off the lampshade.

Yes, I noticed that - at least the sofa wasn't covered too.

Laura, I'd love to see what happened to them in the 1970s - the swingers' parties, valium addiction and inevitable divorce.

Ooh, you don't want to take the cellophane off the lampshade. It's to protect the fabric, innit? Surprised the sofa isn't similarly covered. I remember sitting uncomfortably on one such circa 1967.

Your captions are hilarious.

my mother spent more money on the protective plastic carpet guards than she did on the carpets.

Did it have a chapter on this?

I love that film - the man looks a bit like John Walters.

Great pictures! We laugh, but these people, what we hippies called "squares" or "straights", (before "straight" had a sexual meaning), still walk the earth in their millions here in the U.S. They elected Reagan and the Bushes.

It's a distinct culture, (the All-Americans as I call them), like the Amish, or the Islamic Wahhabis. Leave It To Beaver come to life. Wholesome, un-fucked-up. Never gone off the deep end or come to the end of their tether. You have to wonder.

But yes, Poet Laura-eate, the cars were great. But even there I couldn't get it right. No Chevy for me. I had an MG Midget!

And it's those All Americans who might elect Sarah Palin as President in 2012 - a prospect that scares the hell out me!

The fifties are two decades after the time I write about, but I am amused to see yet another warning about how much more attractive fiction is than life.

Can anyone doubt it?

Had his 3 volume ''medical'' books growing up during the 80's and 90's. The propaganda, religon and bullshit warped my thinking after reading vol 1 which followed through to adult life.

Vol 2 and 3 made me interested in objective secular atheist scientific anatomy and biology. lol.

I'm not sure if I want to burn the books, edit them myself or throw in bin....