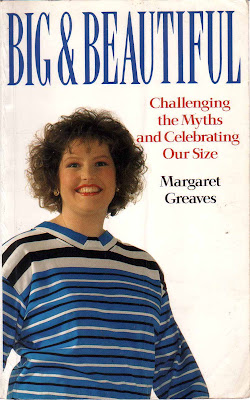 "Now, what top shall I wear for the front cover photo session? I know, the blue one with the horizontal stripes. That'll look great!"
Posted by Steerforth at 7:29 pm

I spend most of my week teaching typography, and I put great emphasis on the emotional and suggestive quality of type - so lets just say that selecting a title font that is very tall, slim and....... frankly anorexic is a tad dishonest.

I did re-branding work with 'Evans ( the outside )' a few years ago and all of the senior management and head of design we the thinnest, most insecure and unhappy women I have ever met, they were very keen that I should avoid any visual suggestions of 'volume' in anything I did - as far as they were concerned - their customers were really thin women who just chose to but oversise clothes.

the last line should have read 'buy' oversize clothes

..as a chronic dyslexic - I consider the previous comment ( with only one typo) a triumph.

I felt that your post was elitist in shedding a negative light on this woman that looked perfectly fine. What is she supposed to look like -- some sexual object. Sorry, this post seemed rather sexist to me. -- barbara

Folkways - I'm afraid that my post was far more superficial, principally about 1980s fashions rather than people's sexual attractiveness. As far as gender is concerned, my first 80s fashion post featured a man:

It was also about the fact that just about EVERY book and magazine article I've ever read about fashion says that unless you're slim, horizontal stripes are a definite no-no as they make you look bigger.

Richard - I wish that I could attend your lectures. I've become increasingly interested in typography since I started my new job and now want to buy a "Ban Comic Sans" t-shirt.

There's one heck of a lot of 'beautiful' people out there these days is all I can say.

Which reminds me, there's another ice cream calling from the freezer!

Did you read the article in today's media stating that many passengers no longer stand up for pregnant women in trains as they can no longer tell if the woman is pregnant or simply 'big and beautiful' and do not wish to mortify themselves by getting it wrong!

That's very true. I've faced the same dilemma and instead of offering my place, tend to casually rise from the seat as if sitting was beginning to bore me.

Hmm. interesting comments from everyone. I also thought she didn't look like a 'woman of size', only as if she'd chosen an unfortunate top (and might be mistakenly offered a seat on the tube if anyone were polite enough to offer it to her which they probably weren't).

Love the t-shirt idea! Is it connected to the riposte from one of the passive aggressive notes? Love that blog..

PS any chance you can switch your comments section to allow username and URL? I hate signing in with google..