The Further Adventures of Derek 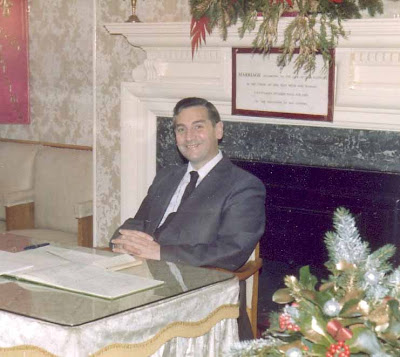 As some readers of this blog will know, four months ago I came across a large box of journals written by a man called Derek. They were about to be thrown into a skip, as they had no resale value. But when I started to look through the foolscap files of typed A4 pages, I realised that I had found something special.

At first I laughed at Derek's diaries for their Pooterish prose; but as I got to know him, I felt a growing respect for this seemingly ordinary man who was plagued by extraordinary thoughts and desires.

In addition to his devout Mormon faith and passion for books, Derek's diaries reveal a man of eclectic tastes, from this: 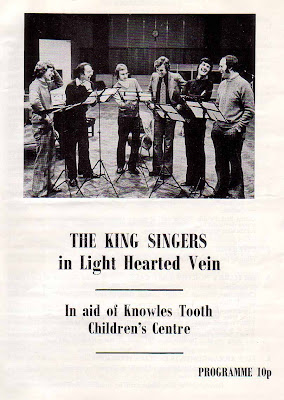 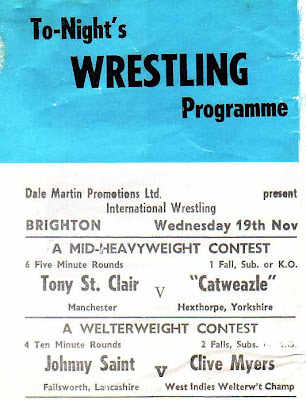 I can imagine Derek enjoying an evening of jolly fol-de-rols with the King's Singers, but his passion for wrestling took me completely by surprise.

The saddest thing about Derek's diaries was his constant use of the word posterity. Derek clearly believed that his carefully-typed pages would be cherished by his descendants, but instead they were disposed of as part of a job lot with his book collection.

I have just finished reading Derek's diaries from 1988. Here is a typical extract:

The day is cold and gloomy, though dry. I spent the morning repairing one of my temple garments; I also hit the street to renew a book at the library and also buy some oats and peas for the rabbits. While I was in the shop, a man in motor cycle gear asked me if the oats were for rabbits. He spoke curiously. Anyway, he then ordered two pounds of mixed molasses. I asked him if they were for a lion. The girl serving us broke into laughter; he did not.

I repeated my fatuous remark. He then said "I do not understand what you say. I am deaf." No answer to that!

Bikers were obviously a problem for Derek. On another occasion he wrote:

Over the weekend the town has been full of "bikers", scooterists from all parts of the country, who foregather in the open spaces and spend their time drinking endless cans of lager.

This would have been a perfectly innocuous sentence, but the addition of two words - scooterists and foregather - inject a Pooterish element into Derek's prose.

Derek desperately wanted to be a writer and as he approached retirement, joined a creative writing class:

Well, I read out my piece of work on the history of the View through a Window in class today, and Mrs Jones suggested that I either offer it to the local newspaper or send it to Pilkington's house magazine. But read out to Brenda at dinnertime, it did not seem to have the same quality; I thought it a trite piece of work, Try as I may, I seem unable to get into my writing that density, that texture that is the quality of true writing. My piece seemed only like a clever piece of sixth form tomfoolery.

I felt rather like Charles Ritchie who wrote in his journal: "...always this piece of staring white paper in front of me with the few and feeble words strung across it. Nothing could be more stubborn than my devotion, nothing more stupid than my persistence. After all, I have written nothing - I will write nothing. Twenty years have not been enough to convince me of my lack of talent."

And yet I have prayed about this matter, asking my Father for time and opportunity to write if my talent is real. I believe he has answered that prayer. I cannot believe that he has blessed my efforts to retire in order to cast me on a barren shore. There are riches here if only I will persevere. But it will involve me in taking life far more seriously than hitherto.

But I would argue that Derek's weakness as a writer - his constant use of Biblical words and phrases like foregather and persevere- is that very thing that makes his diaries so appealing. Derek has a voice that is very much his own and thanks to the internet, some of his writing can now have more readers than he would have dreamed possible.
Posted by Steerforth at 9:48 am

This sounds so interesting and yes - has a very Pooterish tone. I have been working on a similarish archive recently and enjoying the shock of recognition that seems to arise from the embers of another person's life - I suppose that this one is doubly interesting because there is an intention to record and obviously the person was writing about himself directly. the archive that I am studying is a vast collection of letters so it is slightly different. I don't think that your chap is the only person who has been (or rather would have been) rather diappointed at the disinterest in his records.

What an endearing chap. And what a shame he was so harsh on himself. I don't know why he considered his writing any worse than many who fancy themselves as writers. Considerably better than some, with or without the benefit of prayer, I would've thought! And the most important element is the element of authenticity, which he has in spades, even if sometimes unwittingly amusing.

I'm so pleased you've gone back to Derek, I've missed him.

I'm so glad that you rescued Derek's diaries, and even gladder that you post about them. He gets under one's skin, rather.

Thank you for this - he's a fascinating character. The diaries of ordinary people are often the most interesting of all. Perhaps Derek will make it into print one day. I hope it's not the last we've seen of him.

There will be more Derek, I promise, although I should warn you that this is the "Hits on 45" version of Derek's diaries. There are far too many pages about the internecine struggles within Derek's branch of the Mormon church. However, there probably is enough material for a book.

In fact, I could change this blog to "The Age of Derek" and just have pure Derekness.

I wonder if you could set up a print-on-demand "best of Derek" book? I know I'd buy a copy. These remind me of those books from the Mass Observation archives--fascinating insights into the sort of 'normal' lives that go otherwise uncelebrated.

How much wear and tear does a temple garment get? I cycle past the masonic hall in nSt Leonards most days and wondered what was going on inside - I'm getting concerned now.

I'm delighted that Derk is back - he's fascinating and rather endearing - I think there is a lot of all of us in Derek - and Scooterists should be introduced into the English language at once!

From a quick Google, More on the Wrestler Catweazle featured in the flyer pictured...

"Millions loved him and a minority of purists were infuriated by Doncaster’s Gary Cooper, who adopted the name of a fictional television character. With long straggly hair and unruly beard it wasn’t his looks that made Catweazle so popular. Arriving at the ring in sackcloth the wrestler would remove his robe to reveal a lanky body wrapped in a gaudy wrestling outfit. Having placed his lucky-charm toad on the corner post the match would commence with Catweazle literally running rings round, and generally humiliating his hapless opponent. For the most part the fans loved his antics and Catweazle was one of the most popular of wrestlers throughout the 1970s and 1980s. It was a tribute to the man that he was selected by Dale Martin Promotions to oppose Mick McManus in the Londoner’s final televised bout. The wrestler’s untimely death and subsequent cremation led to the inauguration of the annual British Wrestlers Reunion."

How our tastes have changed (Lucky Charm Toad!).

I have to confess that as a boy, I was quite a fan of the wrestling on World of Sport and Catweazle was a hero of mine. Yes, he did literally run rings around his opponents - a great entertainer.

Oh for the days of wrestling on a Saturday afternoon. I adored Kendo Nagasaki, but I especially loved Dave 'Fit' Finlay from Norn Ireland who wore green and white leotards and leggings with shamrocks on the knees and his wife/manager 'Princess Paula' who wore full-on Red Indian (sorry - 'First Nations') Feather War Bonnet and fringed suede clothing, and they had a routine between them where she would have a go at him from ringside, making out he wasn't fighting well enough and she'd turn her back and refuse to look at him, and he'd run around the ring, begging her on his knees to forgive him, all the while fending off the attacks of the other wrestler. It was genius.

It was art, as well as entertainment.