'This book contains nothing but the truth' 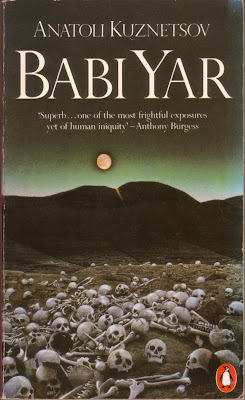 'I am writing this book without bothering about any literary rules (or any political systems, frontiers, censors or national prejudices). I am writing it as though I were giving evidence under oath in the very highest court and I am ready to answer for every single word. This book records only the truth. AS IT REALLY HAPPENED.'

It would be inconceivable for a book as important as Primo Levi's If This Is a Man to be allowed to go out of print. Aside from its literary merits, the subject matter has secured its status as a 20th century classic. However, Anatoli Kuznetsov's Babi Yar hasn't enjoyed the same fate.

Babi Yar was the scene of one of the most appalling acts of mass murder of the Second World War. 200,000 people - mainly Jews - were killed by the Germans and thrown into an open grave. Most of the victims were shot, but there are also accounts of women being gang-raped and beaten before being buried alive.

Anatoli Kuznetsov was a 12-year-old boy when the Germans invaded his home city of Kiev and for the next few years he kept a secret diary, recording both personal and anecdotal accounts of family, friends and neighbours. This diary became the basis for Kuznetsov's 'documentary novel' Babi Yar.

In some ways Babi Yar is a misnomer for Kuznetsov's book, because the massacres mercifully only occupy a few chapters. I say mercifully because, with the best will in the world, I don't think I could face reading 460 odd pages of people being shot, beaten, raped and gassed.

So what is Babi Yar? The narrative itself is primarily a young boy's memoir of survival and it is written with great wit and a typically Russian sense of the absurd (yes, I know Kiev's in the Ukraine, but Kuznetsov is half-Russian). It is the author's humour that makes the rest of the novel bearable.

But first and foremost, Babi Yar is an impassioned polemic against man's inhumanity to man and Kuznetsov is as scathing about Stalin's regime as he is about the Nazis:

'Soviet humanism, German humanism, Assyrian humanism, Martian humanism - there were so many of them in the world and the primary aim of each one was to kill off as many people as possible; they all began and ended in Babi Yars.'

'What is this banditry going on all over the world? First one gang appeared, with their red banners and fine slogans, murdering, robbing and destroying. Now another has arrived, also with red banners and fine slogans, also murdering, robbing and destroying. You are all bandits. Some people build and work and labour in the sweat of their brows, then the looters come along, who have never created anything since the day they were born but know how to shoot. And they grab everything for themselves. It is you, and only you, the ones who do the shooting, who are the real, genuine enemies. HENCEFORWARD AND TO THE END OF MY DAYS I SHALL HATE YOU AND YOUR MISERABLE WEAPONS, MAYBE I SHALL DIE IN ONE OF YOUR PRISONS OR FROM ONE OF YOUR BULLETS, BUT I SHALL DIE FULL OF CONTEMPT FOR YOU AS THE MOST LOATHSOME THING ON THIS EARTH.'

Unsurprisingly, Babi Yar didn't go down terribly well with the Soviet censors. The only surprise is that an edited version was allowed to be published. Kuznetsov copied the original manuscript on 35mm film and after convincing the KGB that he was trustworthy, was permitted to travel to London in 1969 to do some research. Kuznetsov decided to smuggle the manuscript film out in the lining of his jacket.

In London, Kuznetsov eluded his KGB minder and defected to Great Britain. Three years later a new version of Babi Yar appeared, containing the original manuscript and passages that Kuznetsov didn't dare write in the Soviet Union. In the Penguin translation, the censored material appears in bold type whilst the additions are in parentheses.

Kuznetsov died of a heart attack in 1979 at the age of 49. Some people suspected foul play, but there was no conclusive evidence.

Why is Babi Yar out of print? It is a well-written, powerful account of life under Nazi and Soviet totalitarianism and, literary merits aside, is a vital historical document. It could be argued that the attrocities at Babi Yar were eclipsed by the horrors of the camps, but that doesn't justify the fate of this great novel.

I hope that an enlightened publisher decides to reprint this compelling and important book.
Posted by Steerforth at 9:23 am

I wish I were able to read such a book without weeks and weeks of sleepless nights, so thank you for distilling it for me Steerforth.

What an amazing chap, who both escaped and had to go to such lengths, even long after the war to get his story out into the world domain. Perhaps he is the victim of a book title which is just not immediately meaningful to most people whereas Primo Levi's 'If This Is A Man' packed a punch even before you lifted it off a bookshelf.

Sounds... well, sounds pretty hard going actually, but I'm grateful to you for bringing it to wider attention.

I must admit that my preferred length of Holocaust reading is under 200 pages. Kertész's Fateless, Wiesel's Night, Appelfeld's Badenheim 1939, Begley's Wartime Lies ... maybe the authors can't face too much of it either. Latest acquisition, for reading soon I hope, is Fred Wander's The Seventh Well, published in Germany in 1971 but only translated into English last year, and immediately proclaimed a masterpiece. We'll see.