When I was a student, I visited Czechoslovakia a year before the Berlin Wall fell. I had no idea what to expect and wondered if Western propaganda had exaggerated the grim image of Eastern Europe. But as I left Prague station with my girlfriend, we both felt a palpable sense of gloom about the city.

We had travelled from Vienna and were struck by the contrast between the two cities. Vienna was smart, lively and cosmopolitan. Prague was frozen in time, decaying, depressed and eerily quiet for a capital city.

Two scenes in particularly stay in the mind. In the first, my girlfriend and I were unsuccessfully trying to negotiate our way through a system of tunnels under a main road. A middle-aged man saw us struggling and subtly signalled to us that we should follow him. He marched ahead, afraid to be seen talking to Westerners, and with small hand gestures pointed the way. When we reached the end of the tunnel, he gave a brief, shy smile and quickly waved goodbye. In the second scene, I remember how people were eating ice creams as they walked home from work. Every ice cream was the same flavour - only one was available - and they were all a pathetically small size. How much effort would it have taken to at least have a choice between strawberry and vanilla?

All this is a roundabout way of saying that my experience gave me a rather negative impression of the old Soviet bloc countries. But in spite of that, I would still rather take my chances in Stalin's Russia than live through any form of nuclear conflict.

The received wisdom is that the nearest we came to nuclear war was the Cuban Missile Crisis. However, it is now becoming clear that there were other, potentially more serious flashpoints during the 1980s. If an attack had been launched against Britain, then Kelvedon Hatch would have been one of the main control centres for the UK.

Built in the 1950s and decommissioned in 1992, this bunker was built to accommodate up to 600 people for three months without the need to replenish supplies. Most of the equipment is from the 1980s, including some old Apple computers with huge diskettes.

Here are some photos I took last week: 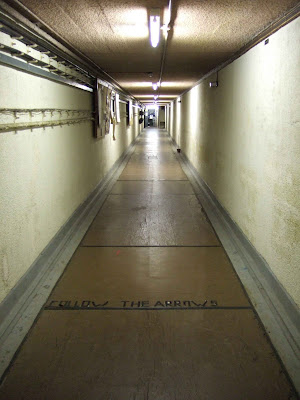 The entrance to the bunker is the front door of a modern farmhouse. Once you're inside, this tunnel takes you into the centre of a hill. Walking alone down this long tunnel, passing rows of geiger counters, is a rather unsettling experience. But what follows is even stranger. 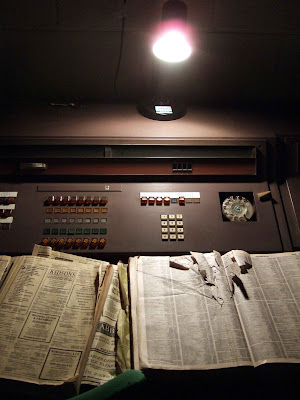 The bunker complex begins with the communications section: a series of rooms filled with radios, telex equipment and phones. There is even a BBC studio, to broadcast reassuring messages to the nation, or what's left of it.

To the left of this machine is a door leading to a vast, private telephone exchange. I have no idea why there is a copy of the Yellow Pages. I can't imagine that anyone would be dialling out for a pizza. 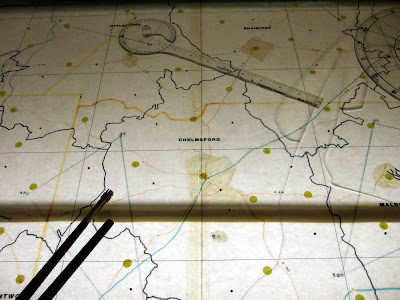 A cheery little map that allows bunker personnel to measure radiation yield, wind speeds and fallout levels. Many of the bunker staff would have lived locally, so they'd be able to work out whether Auntie Doris had been nuked or not. 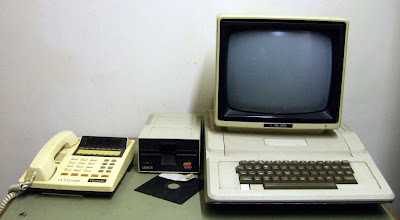 This photo was only taken a few days ago, but it looks more like 20 years. 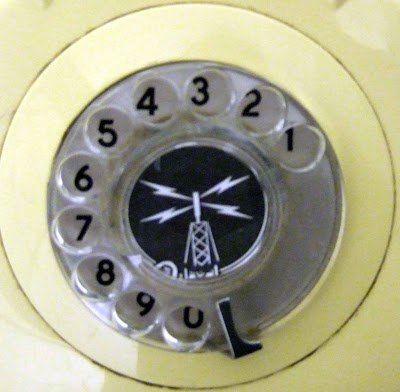 Even the end of civilisation needs a good logo and this one is quite appealing. I'd love to know what brief they gave the artist who designed it. It looks a little bit like the W.A.S.P. symbol in Stingray. 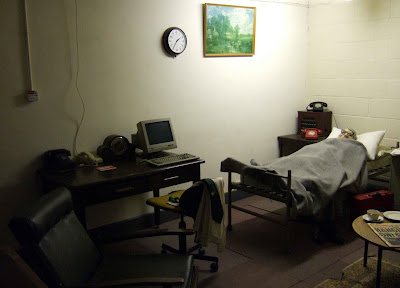 This is the Prime Minister's room, complete with faded Hay Wain. It is unlikely that any senior officials would have had time to travel from London to the bunker. 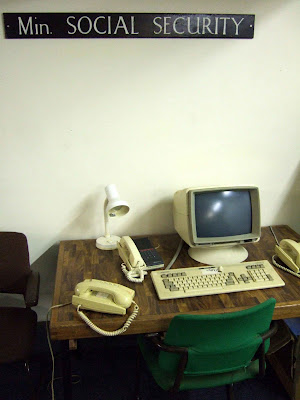 'Hello, is that Social Security? My workplace has just been vaporised. Can I claim Jobseeker's Allowance?' 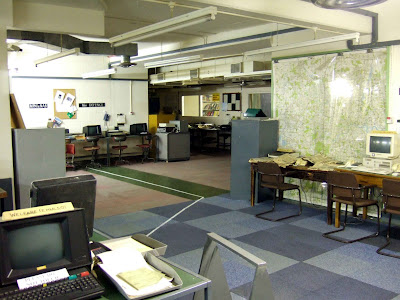 It's hard to convey the sheer scale of the bunker. This picture only shows a part of the main operations room, which contains desks for every Government ministry. 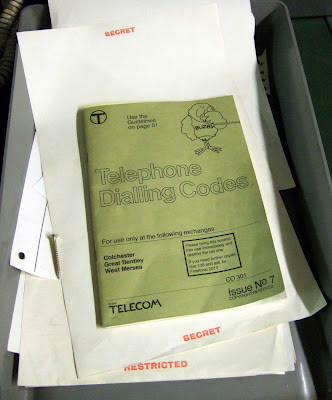 I love the combination of grim, top secret documents and the image of British Telecom's inane Busby logo. 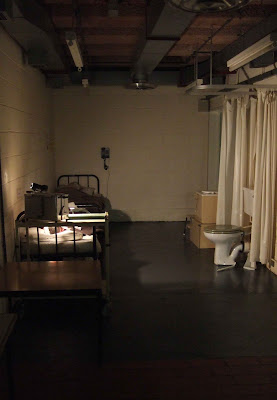 If you're feeling a slightly under the weather, the bunker has medical facilities. I would prefer a little more privacy when going to the loo, particularly as this is a corridor. 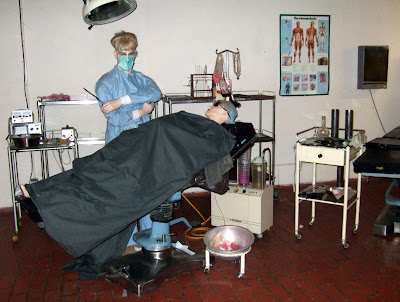 Ominously, there are plenty of hospital beds in the bunker and even a makeshift operating theatre. 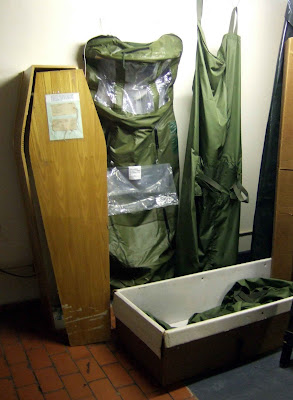 And only a few feet away from the operating table, there is a selection of coffins and body bags, just to cheer you up.

I cannot begin to imagine working in this environment, even during peacetime. Given that a single nuclear warhead is 250 times more powerful than the Hiroshima bomb, this bunker is effectively a tomb, offering its inhabitants nothing more than a delayed death.

On a cheerier note, you can hire the bunker for weddings and children's parties. I'd love to know what sort of freak would hold their child's sixth birthday party in a nuclear bunker.

I wonder how much they charge?
Posted by Steerforth at 1:23 pm

I was lucky enought to spend a semester studying in Prague - in 1996 so after the changes. One of our biggest differences between students was of hair dye and tights - all one colour in the East. And of course for us Westerners, all opaque black tights, or natural hair. Takes you back...still reminds me of living here still sometimes - buses, taxes, clothes shopping in Hastings etc.

Is that John Major in the Prime Minister's bed? He appears to have forgotten to remove his spectacles before sleep.

I think that's the RKO logo - most memorably used in the last scenes of "The Rocky Horror Picture Show", which might be the answer to who has a party in a nuclear bunker...

Yes, RKO - I'd forgotten about that.

James - it is John Major. I don't know if he made a habit of wearing his spectacles in bed. Perhaps Edwina Currie would be able to enlighten us.