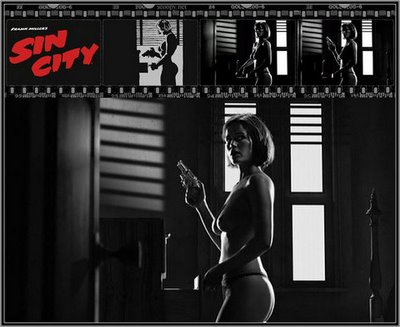 It was brilliant and as near to you could get to the graphic novel. Instead of turning a comic into a movie, they turned a movie into a comic and the result, thanks to CGI and the genius of Robert Rodriguez, is visually stunning. There's a lot of violence, but it's comic book violence. People get showered with bullets, lose limbs and jump off skyscrapers, but still somehow live to fight another day.

The cast were generally superb, but my favourite was Carla Gugino, for obvious reasons.

This morning I looked her up on the internet and ended up finding this article: http://www.thefword.org.uk/reviews/2005/06/sin_city

If you can't be bothered to read it, there is a damning review of the film by a 20-year-old student who complains that the film is 'a tedious round of one dimensional, patronised, possessed women'. It's a good article and argues its case very persuasively and I ended up feeling a bit chastened for enjoying looking at so many scantily-clad chicks with guns. All I can say is that everyone in the film is one (or rather two) dimensional, in keeping with the film's origins and the men are just as stereotyped as the women. The only difference is that they keep their clothes on.

I think Sin City would be more offensive if it purported to be remotely realistic, but the whole point of the film is that it is turning live actors into comic book characters.
Posted by Steerforth at 6:53 pm

You have a very interesting blog. Blindness is a good choice, book-wise and Nick Drake is amazing.

Thank you for your kind comments. Your blog is excellent and I shall be visiting it regularly.