Have you heard of this film? 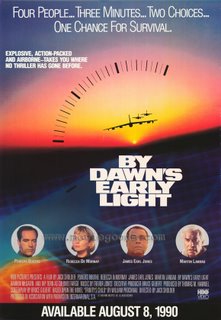 I've just watched a film called 'By Dawn's Early Light'. It was made in 1990 and stars Martin 'Space 1999' Landau and James Earl Jones, amongst others and if you can turn a blind eye to the Hollywood gloss and slightly stereotyped characters, it is a superb film. So good, that I can't understand why I've never heard of it. I may not be Barry Norman but I've heard of most movies, good and bad and as far as I can tell, this one hasn't been on television and the DVD is only available intermittently. So what's so good about it?

The plot is straightforward enough. During the last year of the Soviet Union's existence a separatist group get hold of an atomic weapon and detonate it, setting a chain of events into motion that threaten to lead to a full-scale nuclear war between NATO and the USSR. What's so brilliant about the film is its terrifying plausibility.

Today we live in a climate of hysteria about terrorist attacks and WMD's, but until the end of the Cold War we faced the far more terrifying prospect of a nuclear holocaust. Yes, it didn't happen because common sense prevailed, but archives show that there were plenty of hawks on both sides of the Iron Curtain who were prepared to contemplate nuclear war. Even more depressingly, many civilians agreed. In a 1985 survey, 8 out of 10 Americans said that they'd rather be dead than red. So much for 'Where there's life there's hope'.

'By Dawn's Early Light' is a chilling glimpse of what could have happened if the more psychotic elements in the American military had assumed power during an international crisis and the result is far more terrifying than any horror film I've seen. If you want to be scared out of your wits, try this movie.
Posted by Steerforth at 7:46 pm