From the Ridiculous to the Sublime 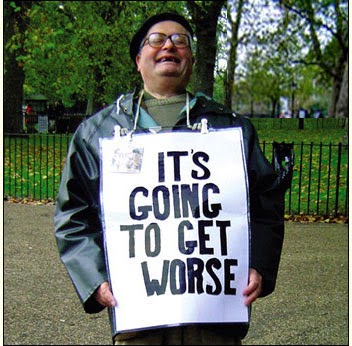 A few weeks ago I bought several tonnes of books, in the belief that they would yield a reasonable amount of saleable stock. Sadly, my hopes have been dashed. Most of the books look as if they have have come from a dystopian, alternate past, in which good literature never happend.

Here is a selection of some of the more striking examples: 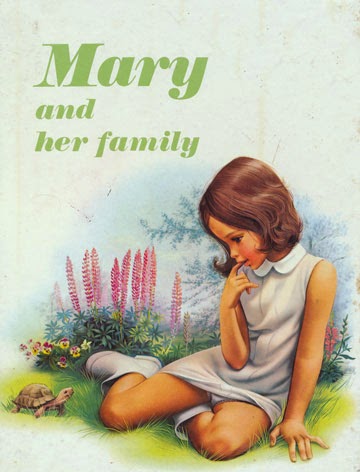 In a scientific poll of three people, 66.6% found this cover rather creepy, while the remaining 33.3% found the reaction of the other respondents quite disturbing. 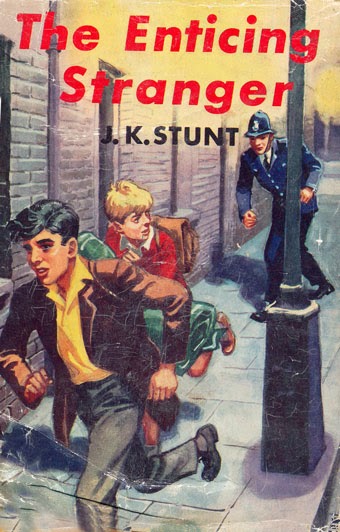 Before J. K. Rowling, there was J. K. Stunt - Joyce Kathleen Stunt to her family and bank manager. Her novel was reprinted several times, but didn't survive the cultural cull of the late 1960s. 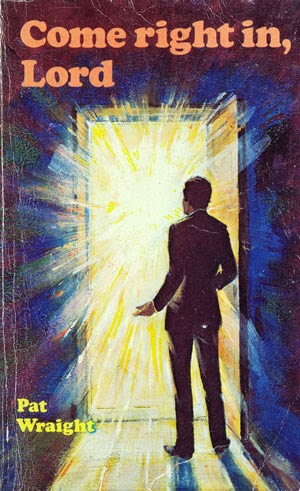 I suppose that having a human-looking deity standing on the porch would have appeared a little odd, so the illustrator played safe and opted for a celestial light, but the end result looks as if an atomic bomb has exploded. 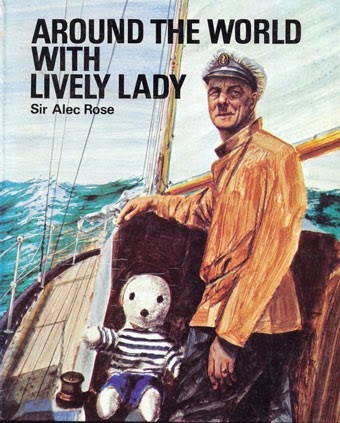 Imagine an alternate reality in which Hitler didn't shoot himself in the bunker, but escaped to Argentina on a small yacht, accompanied by his favourite cuddly toy, Gunther. 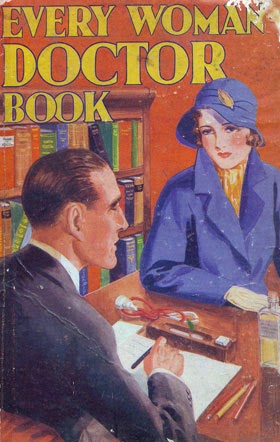 "Well Mrs Fotheringale, you're clearly suffering from an all-too-common case of feminine hysteria. You should spend the winter in the south of France, but until then I'm giving you some laudanum. Take thrice daily." 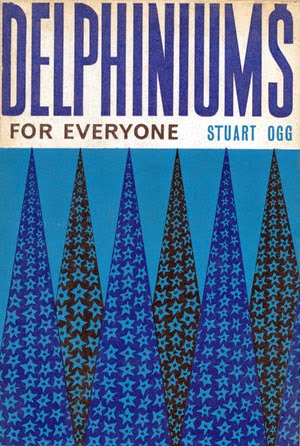 There's nothing amusing about this cover. I just think that it's a rather lovely example of early 60s graphic design. 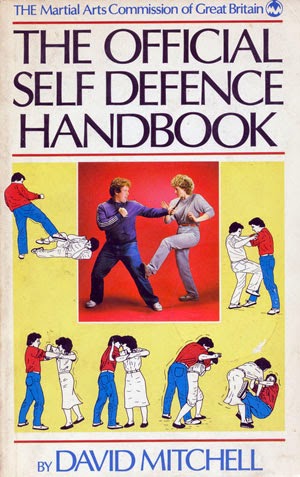 Two decades on, book covers weren't so aesthetically pleasing. This title, by one of the many David Mitchells of this world, features a battle of the perms: 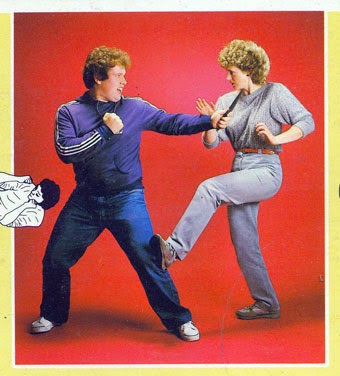 Next, a possible example of shameless plagiarism, published six years after the debut of Thomas the Tank Engine: 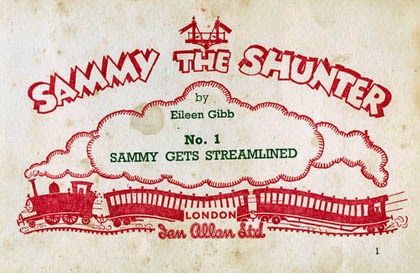 With its prophetic, Beechingesque title about rail cuts, this title is far more fast-paced and surreal than the rather pedestrian Rev. Awdry books, but for some reason Eileen Gibb's series never took off.

Perhaps it was something to do with copyright. 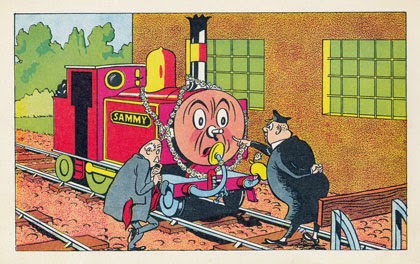 Finally, not a book, but a beautiful album for collectors of monograms and crests, which more than made up for the odd, unsellable books that have dominated the last week: 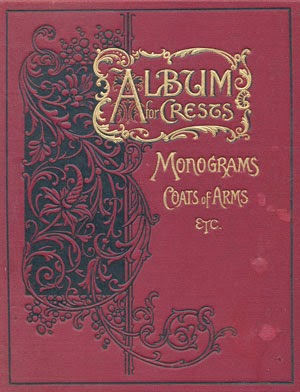 This splendid album, which has a very useful supplement of mottoes and classical quotations, begins with a preface:

"The collecting of Crests and Monograms is rapidly increasing in popularity, and ranks second only in point of interest with Postage Stamp collecting."

The pages all have attractive borders with spaces for collectors to paste their monograms on: 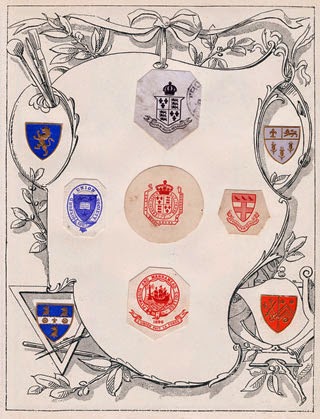 Most of the crests and monograms are no larger than an adult thumbnail, so I've enlarged them: 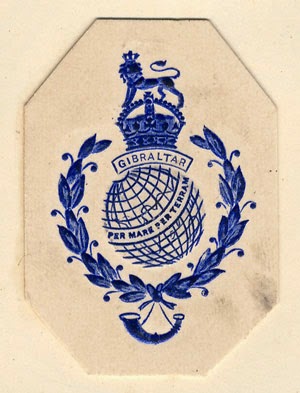 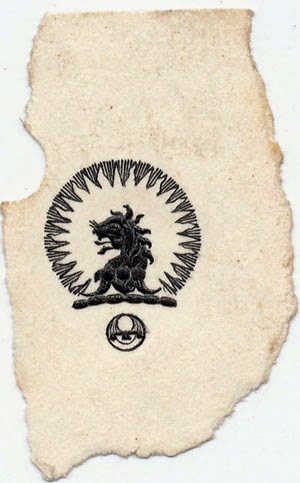 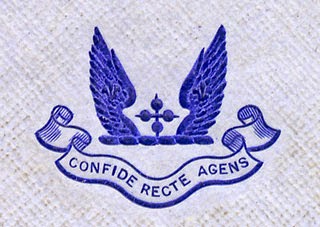 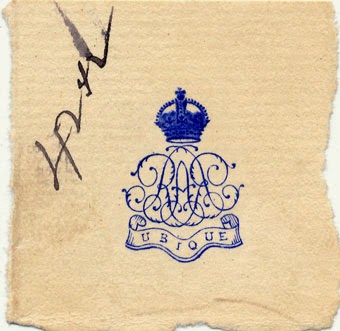 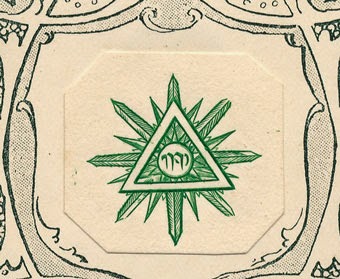 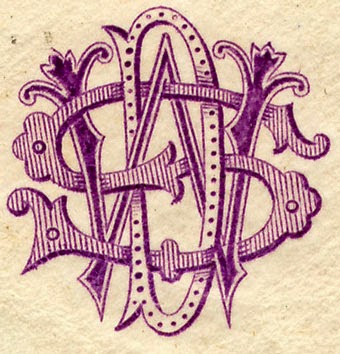 One for eBay, I think.

Some hobbies deserved their demise - the collecting of phone cards is one example that springs to mind. But the monogram was a glorious thing and although it may be gone, I hope is not forgotten.
Posted by Steerforth at 10:50 pm

As ever, I would probably have bought all of those if I'd stumbled on them in a second-hand bookshop. The crests book is a great scores, though. 'Ubique' is the motto of the Royal Artillery (I think). I remember my father saying that the infantry used to grumble, 'You bike, we walk.'

I'm with the 66.6%! Thanks for some laughs this foggy Sunday morning, although I do sincerely pity you at times...

fabulous covers, shame about the books? I like the monogram one though, straight away got me daydreaming of Lord Peter Wimsey which is a great way to start the day ;-)

My father still has the book of monograms and crests his father collected as a boy in a very similar album, I like them more than stamps, I imagine it as a hobby for boys who went to minor public schools proudly displaying their upper middle class credentials and respect for the mechanics of empire. Also so many of them are just so attractive to look at.

Mike - There are quite a few military crests in the book, from regiments I'd never heard of. There is a different Ubique crest for the Royal Artillery, with a canon in the design.

Heather - I was about to say that I wish that we could all have monograms, but then we'd end up looking incredibly naff, like those fake coats of arms that companies sell to the aspirational and the displaced.

Desperate Reader - I think you're right. People below a certain class wouldn't have had the opportunity to collect monograms and crests, unless it was the odd regimental letter bearing bad news.

I want more Sammy the Shunter. He looks very much like the Stones to Thomas's Beatles.

You have TONNES of this comedy gold? It's all in the eye of the beholder, as your witty descriptions are like Harry Hill taking over from the late Jeremy Beadle on "You've Been Framed". I expect to see a 2015 Christmas best seller along these lines - you could use a pseudonymn like "J.K. Stunt-Double" or "J.R. Flyleaf" etc.

Thanks for a fun post. I bet these would be very, very, difficult to sell, but they make for an excellent blog post.

I actually had to look the first one up to prove o myself that this wasn't all a spoof — but yes, it really exists! Count me among the "it's creepy" numbers!

Yes, most definitely creepy - what a strange and compelling collection of covers! You wonder what some publishers were thinking of.....

Given the popularity of spoof titles for old Ladybird books ( see http://bagofdelights.tumblr.com/post/89652612113/classic-childhood-books-from-yesteryear ), I'd have thought there might be a market for the first 5 of these, if people could see the cover.

Rog - I may have something in the pipeline for Christmas 2015. It's at the editorial stage at the moment, so I shall keep mum until it hopefully receives the thumbs up.

James - I'm actually very pleased when titles like these turn up. It can get very dull dealing with sensible books every day.

Chris - Perhaps I'm over-analysing the picture, but it looks as if the illustrator took great care to make the dress ride up a little, which seems an odd thing to do. It's also a pretty horrible illustration anyway.

In this case, it was a French title, so the publisher had already seen the finished product and thought that it was worth translating into English. Madness!

This post is a real gem and gave me some much-needed chuckles. You know what the cure for hysteria was don’t you, and it wasn’t laudanum! As for 'Delphiniums For Everyone’.......

A good way sub Balthus, but she's clearly longing to stroke the tortoise's head and neck.

The nautical fellow looks to me a good deal more like Lyndon Johnson. I don't have my usual reading glasses, though, and may be wrongly taking a toothbrush mustache for shadows.

"Ubique" sounds like a better motto for the National Security Agency, and a somewhat odd one for the Royal Artillery, given the bother of shoving heavy ordnance about.

Nell - I don't think that's available from the local GP, although some doctors have been struck off for offering it anyway.

George - You're right. I was going to say that you should suggest it to them, but they've probably already read your comment.

*Coughs* I've been stuck with sets of Star Trek and Star Wars phone cards that nobody seems to want these days! *coughs* More fool me!

I always dreamt of having a fabulous monogram that I could have engraved on the family sterling (well, stainless steel, actually) and put on my heavy cream-coloured notepaper, with little symbols (post box or snail for mail address, tiny house for street address, tiny telephone for our number -- and what for email? Perhaps a small tasteful lightning bolt). Of course the last note paper I bought was a pad of Basildon Bond from Boots, but hey, it never hurts to dream!! xoxox

Boy, I was immediately struck by that delphinium book cover. My first thought was I'd love it as a poster. That made me wonder if you couldn't make a bit of money turning particularly artistic or striking covers into posters. But, then I suppose there'd be problems with copyright. Great post, anyhow.

Annabel - I've just checked on eBay and I see what you mean. I don't think you can even use them for phone calls any more.

Carol - I've always fancied a wax seal as well. In fact, the whole paraphernalia of letter writing really appeals, apart from the bit where you have to write a letter.

Geranium - If you want a high-resolution scan of the image for framing purposes, I'll happily send you one.

Canadian Chickadee said...
This comment has been removed by the author.
8:20 pm

Carol - I've tried, but the email has been bounced back to me, saying that the address is wrong.

Canadian Chickadee said...
This comment has been removed by the author.
6:16 pm

Canadian Chickadee said...
This comment has been removed by the author.
12:59 am

I agree with the man with the sign. If I ever get a second tattoo, it will be that. Or, if I'm trying to be more positive, it will be a quote from the book Cosmic Banditos: 'It will be interesting to see what happens next."

Goodness me, I've just arrived here after following a link from the Quince Tree, and what do I spy, Mary and her family! Oh how I loved this book as a child - should you not have found a buyer, then I would love to purchase it from you!

Joan - I'd probably choose one of the monograms.

Nicola - There's a copy on sale at AbeBooks for £20. Mine will probably go on sale for around £12.

I will happily buy it from you, do you have an online shop?