I found a photograph the other day, lying on the floor of my warehouse. I presume it fell out of a book. I must have trodden on it several times, as it was quite battered. The back of the photo said that it was printed in Worthing, Sussex.

Later, I scanned and cleaned the picture. As soon as I looked at the enlarged image, it became more interesting: 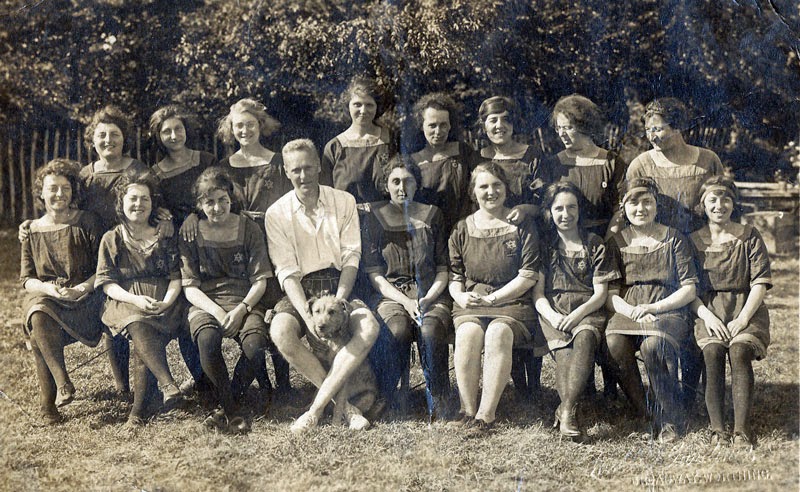 There is something remarkably modern about the man's face. Is he wearing some kind of lederhosen, and what is his relationship to the young women? 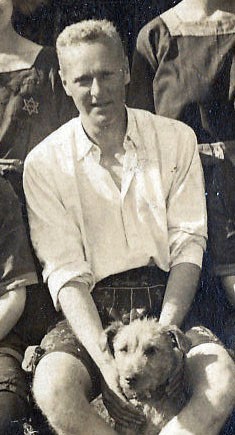 But the real revelation was the girls' uniforms: 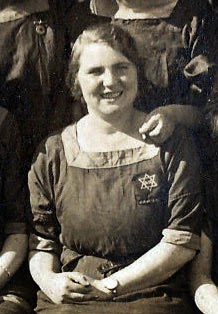 Most of the girls are wearing a Star of David. If only I knew when this photograph was taken, it might be possible to begin to construct a narrative. Instead, all I have are questions.

Was this picture taken before the rise of Naziism? Were these girls refugees? Was this a boarding school for British Jewish girls?

I'm posting this is the vain hope that someone may know something of the background to this picture. There is a story to be told.

P.S. - Many thanks to Clare Quilty, for quickly finding the likely answer: http://www.sionschool.org.uk/
Posted by Steerforth at 9:23 pm

The girls' clothes look like gym kit from the 20s, with decent knickers and stockings underneath (apart from the one girl who's barelegged). Can you see what's written in the star?

No. I've enlarged the picture but it's impossible to see.

Maybe someone from a local museum can help.

yes, quite unusual that there appears to be an aryan in his lederhosen sitting in amongst the jewish ladies in their sportswear. (he reminds me a bit of the hitman “Donald Grant' played by Robert Shaw in From Russia with Love)

Fascinating picture...and well done to Clare for finding that link. Still, I would like to think there's a (completely fictional) story to be created around it...

The original Clare Quilty was probably something of an expert on girls' schools ;)

Worm - Yes, the juxtaposition of a blonde man in lederhosen and some Jewish girls looks rather incongruous from a modern perspective

I've been thinking about your post a lot lately. It's a really interesting picture, but seeing the Stars of David on the uniforms was a bit chilling, especially with the very blond, very Aryan young man in the middle with the dog. Well, at least the dog wasn't a Doberman!

You know, I'm not sure I like having religious symbols on school uniforms, be they crosses or Stars of David or Muslim crescents and stars. To me, religion should be a personal and private thing, between me and my God.

Which is why, even though I suppose I would have to categorise myself a Christian, I don't wear a cross on a chain around my neck. I'm not ashamed of it, but I see no reason to broadcast it.

I'm from Worthing. In 1928 the Thule Society had a secret cell in my home town. My grandmother was a member. She's one of the girls in this photo, which is from a school production based on the Holocaust, which they knew about because a young man called Marty told them about it.

The only true bit is that I'm from Worthing. And yes, I think these are Our Lady of Sion girls.

Carol - I fully agree. I think religion has to be a private matter. The alternative - the theocratic state - is a miserable prospect. The state should respect religious sensibilities, but without pandering to the bigotry of the zealots. I think that we've broadly achieved a decent compromise.

Rob - Apart from the man, who is clearly a time traveller.

Sorry, have lost your email address:
this from the U.S. may interest you. http://dangerousminds.net/comments/codex_seraphinianus_a_new_edition_of_the_strangest_book_in_the_world

Rather obscure reference to Back To The Future ...

Rob - I've got Huey Lewis and the News on the brain now.

Clive - Thanks. This looks absolutely fascinating. I've just been looking at some of the pages on Google Images and I particularly like the bizarre buildings and landscapes. Wonderful.