The other night a curious thing happened. While my wife was sitting in the front room, she suddenly heard the voice of a friend who died ten weeks ago. There was no mistaking the throaty, transatlantic drawl:

"Hi, I just wanted to say thanks. I hope you're all right and feeling better. Things are pretty quiet here..."

It seemed to be coming from the next room - not the one from Henry Scott Holland's overused poem, but our dining room. My wife got up and tentatively walked towards the hall. The friend was now saying something ominous about meeting up soon.

As she slowly pushed the door open, there was a sudden scramble and one of our two new kittens jumped off the answerphone and ran for cover. Our friend's message ended and a new one from my mother began.

My wife felt a mixture of relief and sadness.

The kittens arrived on Saturday, delievered by an interesting woman who once educated Meryl Streep's children. Unlike our last cat, which was like an angelic Victorian consumptive, dying after only two months, these two brothers are reassuringly energetic. Whether they'll help my older son or not remains to be seen.

Cats, dead friends and old jobs were on my mind today, while I drove to Henley-on-Thames to deliver some books to a client. I had plenty of time to think, as the traffic was appalling and what should have been a three-hour round trip was nearer five.

I decided to make the journey worthwhile by adding a brief diversion to the Stanley Spencer Gallery in Cookham, 10 miles east of Henley. The gallery claims to be the "only gallery in Britain devoted exclusively to an artist in the village where he was born and spent his working life." And it's only five quid to get in.

I'm not quite sure what I think of Spencer's paintings, which seem to cover a spectrum from William Blake to Beryl Cook, via John Nash, but some of them have grown on me.

This is Spencer in 1914, before he saw active service in the First World War. His experiences in the army had a profound effect on his art: "my ideas were beginning to unfold in fine order when along comes the war and smashes everything." 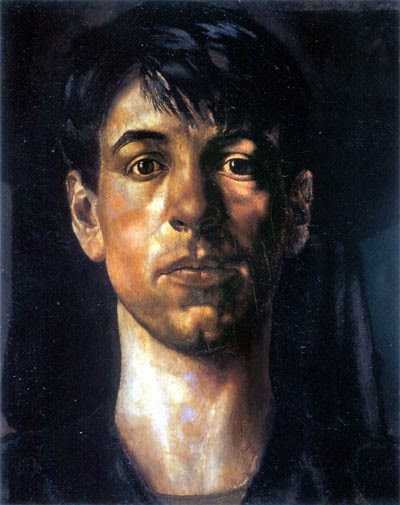 Traumatised by war and the loss of his older brother, Stanley Spencer sought solace in his beloved childhood home, Cookham - "a suburb of Heaven", which he used as the setting for his visionary art: 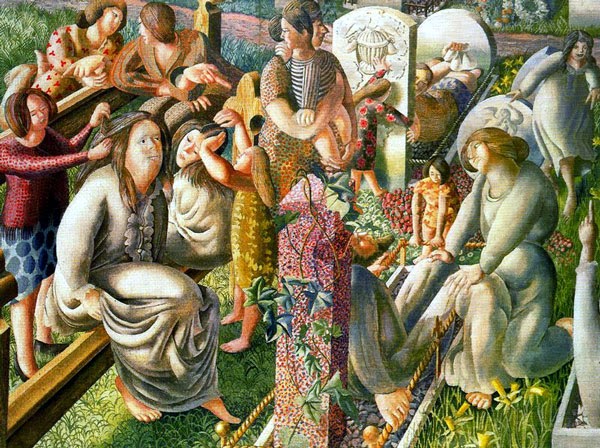 Spencer is known for his religious paintings, with their claustrophobic crowd scenes, so I was a little surprised by the number of conventional landscapes, like this one: 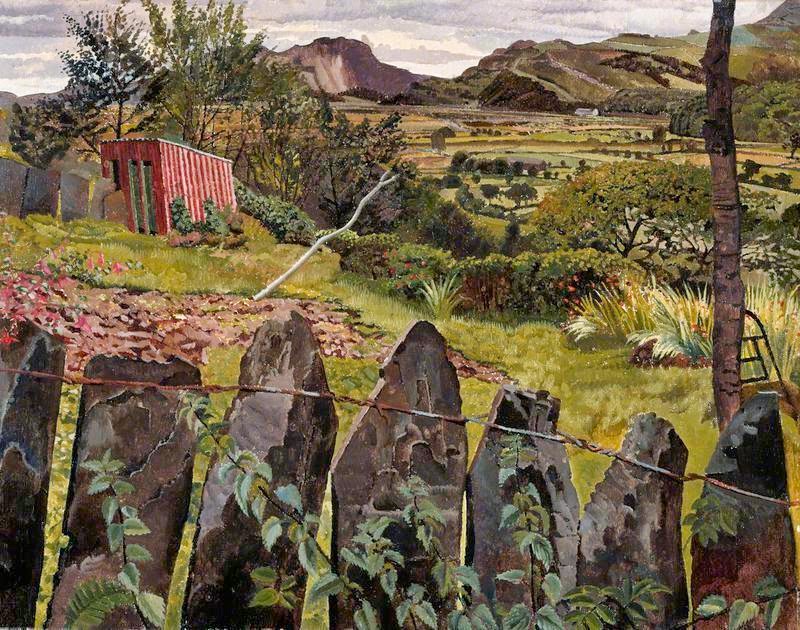 According to this excellent website, Spencer was long regarded as a "provincial joke", but has been recently cited by some as the greatest British artist of the 20th century. I suspect that he was neither.

After visiting the gallery, I decided to have a stroll around Cookham. It was pleasant enough, with many quirky, interesting buildings, but like so many traditional English villages and towns, it has been ruined by a constant flow of heavy traffic. When I crossed the road, I took my life in my hands. 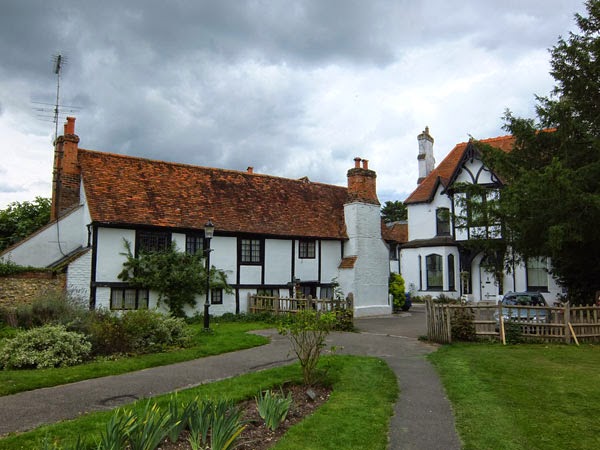 Cookham lies on the bank of the River Thames, roughly 30 miles west of London. This is the landscape of The Wind in the Willows, Three Men in a Boat and Alan Ayckbourne's Way Upstream (worth watching on YouTube, if you have the time), with leafy banks and small islands, not to mention Toad Hall. 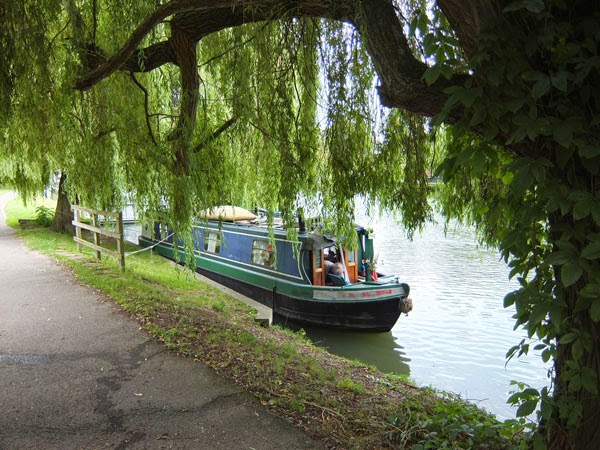 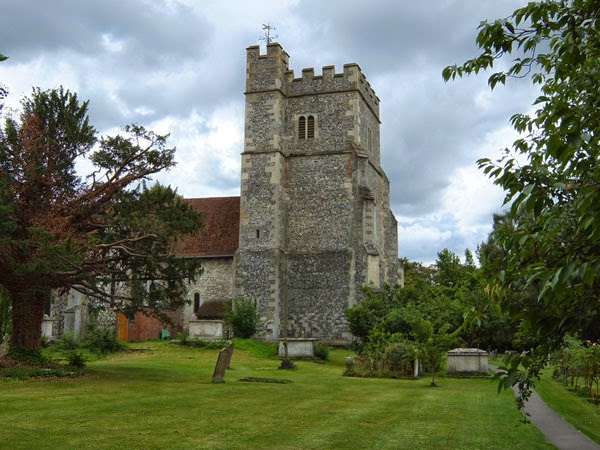 The parish church has a small memorial plaque to Stanley Spencer, which I couldn't find. The grounds are generally well-kept, apart from a section which contains 17th and 18th century graves. Here, the stones are covered in ivy and blackberry bushes, with their names weathered beyond recogntion: 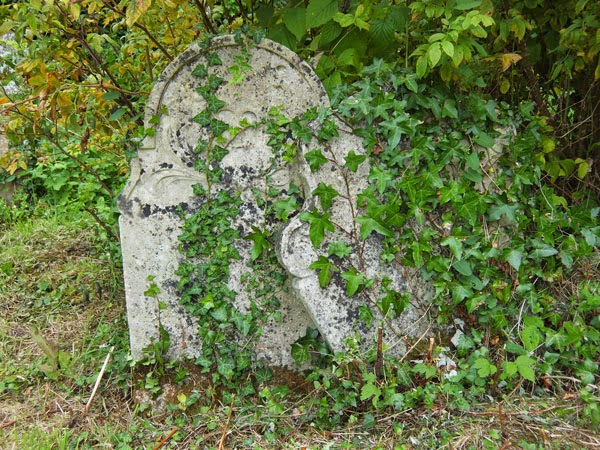 But inside, a memorial from 1713 looks almost as good as the day it was made. I must start saving up for a mausoleum. 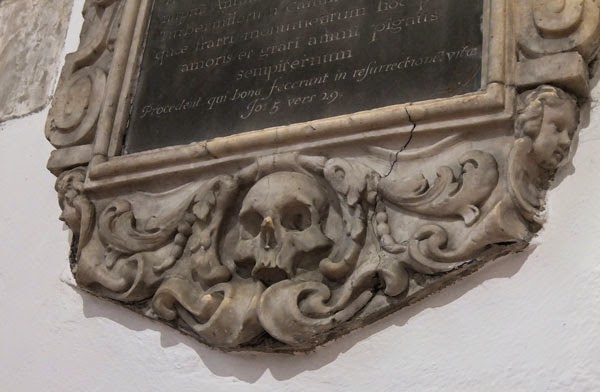 As I made my way back to the car, I passed this curious object: 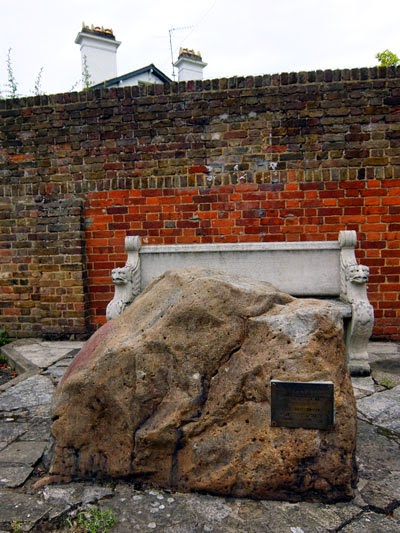 This is the "Tarry Stone", which was the site of a local sporting event for centuries until 1507. I've no idea why things changed in 1508.

According to Wikipedia, "In 2002 Cookham was at the centre of a row over a description of the village's social profile as "somewhat spoiled by the gin and Jag brigade". Famous (i.e. minor celebrities in the UK) residents include Timmy Mallett, Ulrika Jonsson and jeweller Gerald Ratner.

Like a Ratner gold bracelet, Cookham looks like the real thing, but scratch beneath the olde worlde surface and Spencer's "suburb of heaven" is more like an extension of London. The number of BMWs speeding through the narrow streets suggest that it has become a dormitory town for the wealthy.

I wonder would what Stanley Spencer would make of it all.

Posted by Steerforth at 9:27 pm

The landscape looks like the American west. The hill above the broken picket could be a "hogback" such as one finds along the foothills of the Front Range in Colorado, and the grass is suitably yellow. I believe that I have seen one of Spencer's paintings, at the Philadelphia Museum of Art, but don't recall what it showed.

I recently overheard someone say, with genuine awe, "Not THE Timmy Mallett!"

Doesn't seem like anyone knows what happened to stop sports being played at the Tarry stone. This website gives more information on the "known history" of the stone and the Court Rolls' indicate that someone stopped organising the games in 1506.

“A.D. 1506: The tithing man presents that the Warrener ought to hold sports at Cookham Stone on the day of Assumption; and he has not done so"

It is actually a perfect mirror to Stanley Spencer's art - half lovely, half naff

George - It's rural Wales - equally wild and lawless, with hostile but noble natives.

Nilly - I'm so glad that I missed the Timmy Mallett phenomenon. He is the personification of everything that was wrong with the 1980s, but if I was ten years younger, I'd probably have fond memories of him.

Resolute Reader - Thanks for the link. I'm really glad that nobody is really sure about the stone's history - I prefer a mystery. I'd be surprised if it wasn't prehistoric.

Worm - That should have been the title of this post: Half Lovely, Half Naff. Indeed, I could have just got away with a tweet.

This is brilliant: "cover a spectrum from William Blake to Beryl Cook, via John Nash" I think a novel by Joyce Cary called something like Horse's MOuth is supposed to be about Spencer. I went to this place years ago - http://www.nationaltrust.org.uk/sandham-memorial-chapel/ - and found it interesting, if you want to make a habit of Spencer outings.

Zoe - I haven't been there, so many thanks for the link.

The voice on the tape may NOT have been such a coincidence as you think, despite the activities of your mischievous kittens. People often report strange happenings after the death of a loved one. A few weeks after a friend of mine was killed in a vehicle impace, her mother and sister were making their father a birthday cake in the kitchen. The ingredients kept disappearing and then turning up again in the unlikeliest of places, despite the fact mother and daughter were both neat and methodical people. When it had happened about half a dozen times, they realised that this would be exactly Jill's sense of humour to play such pranks and derived great comfort from the thought.

Perhaps the voice on the answering machine was simply another example of the quixotic behaviour of machines. Sometimes, when I turn on my computer, the printer will suddenly start spitting out another copy of something printed earlier, even days before. Where it comes from, I have no idea. Gotta be a ghost, or a gremlin, or something!