Tales of the Riverbank

I had an interesting day in Hammersmith yesterday, collecting some art books from a man who designed this:

As I boxed the books, I enjoyed listening to anecdotes about his long career - one that included National Service in the Intelligence Corps, a spell as a paparazzo in the 60s, followed by many years in Hollywood as a production designer. As if that wasn't enough, he'd also found the time to climb the Himalayas, trek across the Kalahari and paint enough canvases to fill a gallery.

And he's just published a novel.

When he turned to me and asked one of the most feared questions in the English language - "And what do you do?" - I had nothing to say.

It was pretty obvious that Michael didn't really want to get rid of his books, but he'd been given notice to vacate the building where he rents a studio and didn't have room in the Notting Hill flat he shares with his wife.

The studios are right on the riverside and I suspect that they will be bulldozed and replaced with luxury flats, most of which will be bought by foreign investors. It's a great pity that this quirky, interesting building is going to be lost: 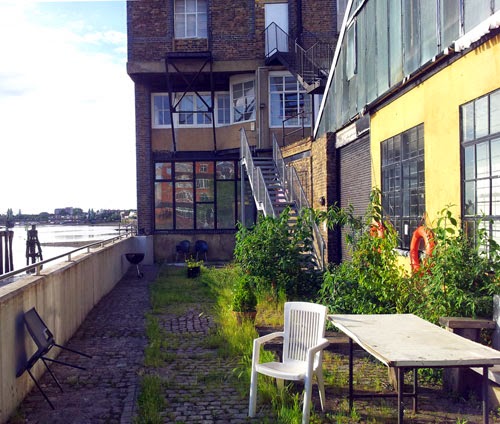 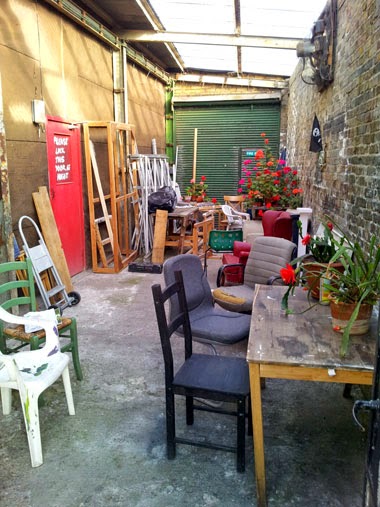 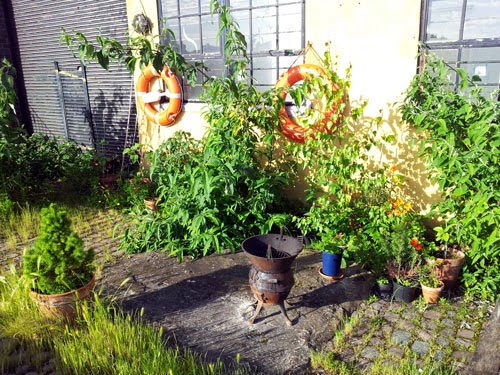 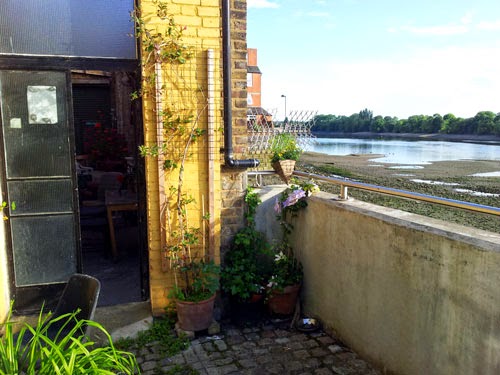 It's strange to see how Hammersmith has changed from being a shabby, depressed, no-man's land, sandwiched between the West End and the genteel outer suburbs, to a cosmopolitain, middle-class property hostpot.

This is how I remember Hammersmith: 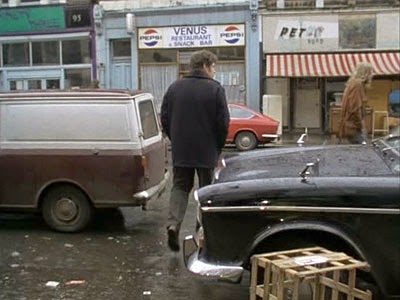 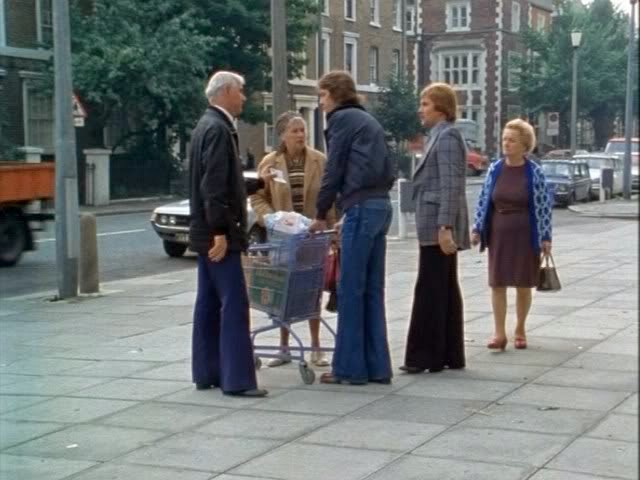 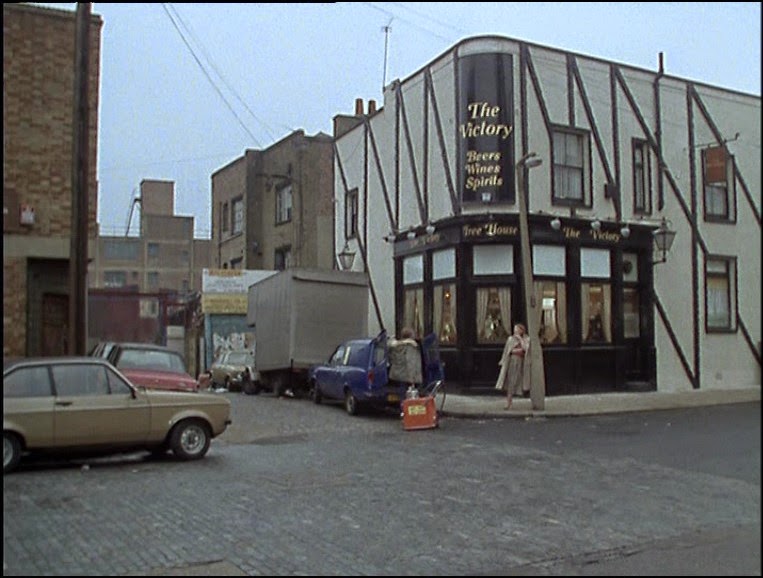 Today, it feels completely different. The area seems to have undergone some form of ethnic cleansing in which anyone who is either working class, overweight or old (or all three) has been deported. As I tried to load my van with boxes, I had to dodge a constant stream of cyclists and joggers, all pursuing their lesiure activities with the same dogged determination that they devoted to the working week.

I also noticed that many of the cyclists were speaking in French.

Michael's charming wife bought us lunch at the pub next door and for a moment I thought that I had gatecrashed a supermodels' convention. Svelte young women in expensive clothes, with perfectly waxed legs, checked their smartphones as they waited to be served exotic drinks by trendy bar staff, half dancing to the deafening music. 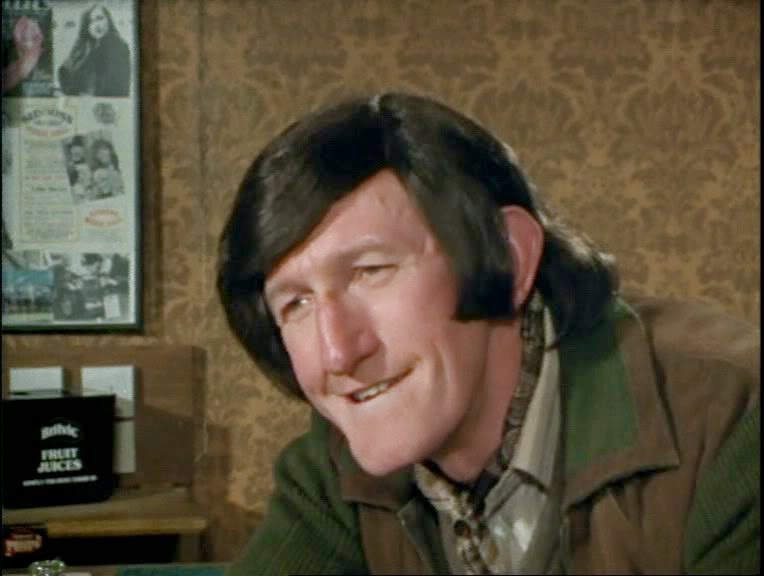 (For non-UK readers The Syrup was a character in the TV series Minder: syrup of figs - wigs)

I suppose he's now in Margate, with many of the other original Londoners.

In many ways, I liked the new Hammersmith. It was a pleasant change to worry about being knocked over by a cyclist rather than being beaten up. It's a long time since I heard anyone say "Wotchoo lookin' at? Eh? Wanna smackinthamaahf?"

The new Hammersmithonians seemed bright, fit and friendly. Several people stopped to help me when my attempts to load shelving units into the van took a farcical turn. Nobody called me mate.

But there is a darker side to the process of gentrification, beside the absurd property prices. Michael's wife said that many of the flats in Notting Hill are now being converted back into houses for Russian oligarchs and there are whole streets full of properties that are only occasionally occupied. A neighbour of hers ended up feeling so lonely and isolated that she decided to sell up and leave.

I'd forgotten how much I used to enjoy weekends in London and felt invigorated by meeting interesting new people. It came as a welcome relief from a phone call on Thursday morning, when we learned that our closest friend in Lewes had died unexpectedly.

She was one of those people who hated technology and as a result, has no presence on the internet (apart from a brief entry on the IMDB for working on Halloween III). Perhaps I'll remedy that.
Posted by Steerforth at 1:30 pm

I've lived in Hammersmith and drunk in its pubs for nearly forty years and no-one has ever said "Wotchoo lookin' at? Eh? Wanna smackinthamaahf?" to me.
Where did I go right?

Maybe it was my silk dressing gown and cigarette holder.

Michael Seymour, that's PROPER star quality - by some accident, I watched Alien last night. For several years in London I lived next door to a young couple who lived in absolute poverty with their baby, literally putting newspaper up against the windows in lieu of curtains, until the husband got a break working as an assistant for 'some film bloke' (Anton Furst) and who took over his workload after his sudden death - later to become one of the most successful sci-fi production designers in Hollywood - by a circular coincidence - he was the production designer for Alien 4. My memories of Hammersmith are tainted by scenes from the film 'Darling' - Julie Christie and Dirk Bogarde looking at dirt-cheap semi derelict cottages along the riverbank as an inexpensive love nest. I had news of a sudden and very tragic death myself today - I'll be consoling myself with something cinematic and fanciful.

Sorry to hear about your friend.

Richard - Your memories of Hammersmith are a little more exalted than mine. All I think of is 'Arfur' Daley and his lock-up. My grandmother was born there, which is proof enough of how downmarket it must have been.

Sorry to read about your friend's daughter - just awful beyond words.

The new Hammersmithonians have moved way beyond beating people up. Nowadays they're more likely to kill you with conversation.

I know nothing of Hammersmith but I share your sorrow at the loss of Michael’s studio. Condolences too on the loss of your friend.