I've lost count of how many carloads of books I've transported from my old farm to the new, grandly-named 'business centre', but I've reached a point where enough is enough. The rest of my books are going in the bin. They've been on sale for nearly two years without attracting a single customer, so my conscience is clear.

As Channing says in Spearhead From Space: "Destroy. Total Destruction. "

During the last few long, dusty days of throwing unwanted books in bins, I've come across a few gems. Here are my favourites: As the advertising slogan used to say, "You can be sure of Shell".

This is from the good old days when having your five a day probably wasn't such a good idea, unless you thoroughly washed the carcinogenic residue off. Thanks to people like Rachel Carson, DDT was eventually banned from agricultural use, although the UK doggedly persisted until the mid-80s.

The last time I saw the acronym DDT, it was on a bottle of headlice shampoo. I didn't buy it. 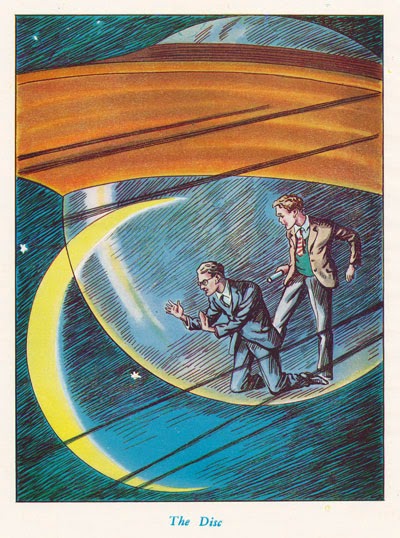 This is from a 1940s boys' annual and features a novel solution to the problem of not being able to wear a tie in space.

If the British Empire had endured, perhaps this is how we would have conquered space, once we'd solved the problem of how to make a decent pot of tea in zero gravity.

There isn't much to be said about this leaflet. I just rather like the early 1950s graphic style. Apparently Nordkapp is Norwegian for Northern Cape. 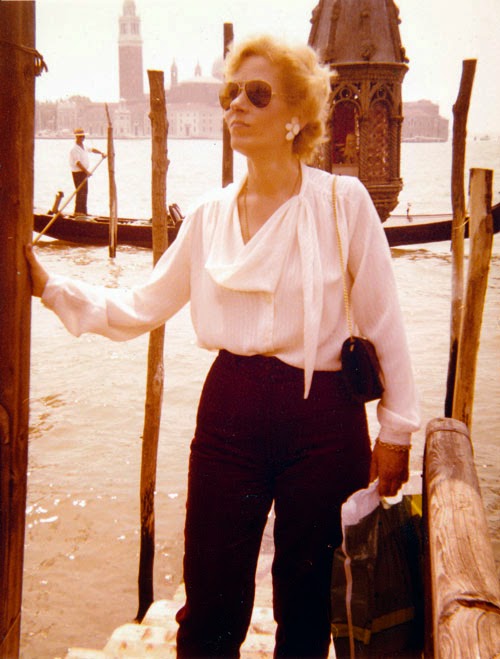 I have no idea who this woman is, but spookily she looks just like a friend who has just died. I'd guess that this was taken in the late 70s or early 80s.

The photo fell out of a novel, where it was marking a page. 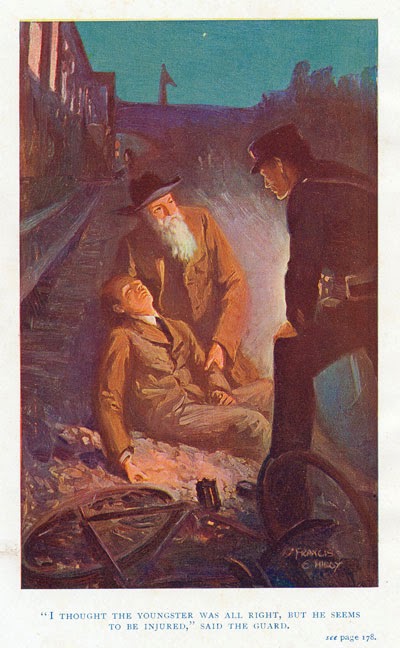 I can't really say why I like this illustration, but I think the combination of of the twilit sky and the lamplight in the foreground reminds me of a magical 'Night and Day' display that used to be exhibited in the Science Museum, many years ago.

I don't know why they got rid of it. They kept the Shipping gallery, which was very dull and didn't have any buttons to push. 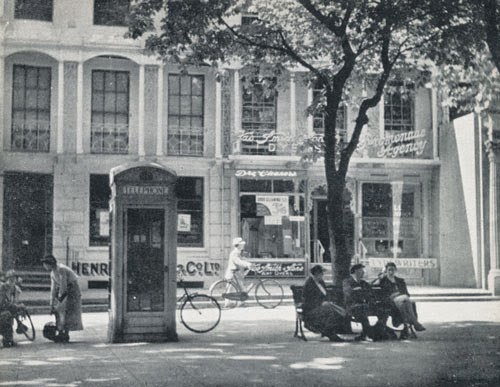 These two images are from a late-1930s guide to photography. Both pictures evoke something of Britain between the wars - an era whose dying embers lasted until the late 1960s (and in the case of my wife's grandparents, the 1990s).

The first reminds me of a parade of shops on the border between Kew and Richmond, one of which was a delicatessen that my parents conspicuously avoided, probably because it sold 'funny' foreign food.

The second photo has an appealling wintry, Sunday afternoon atmosphere, unusually relaxed compared to most family group shots of the time. 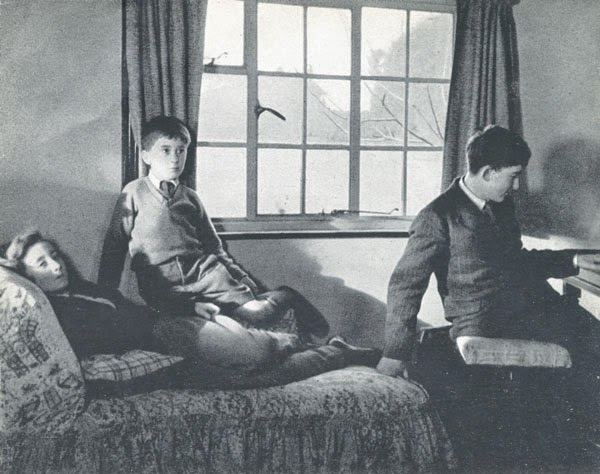 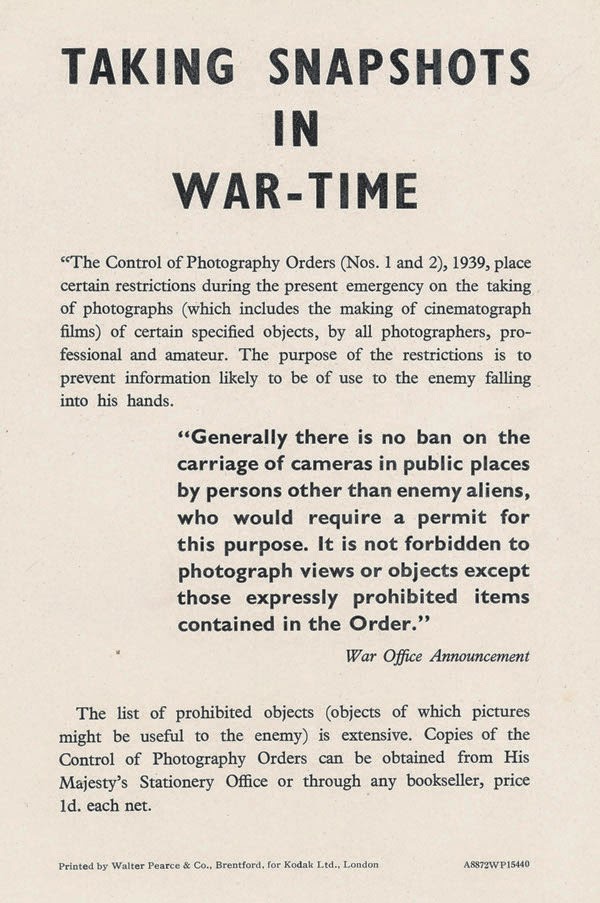 The general message seems to be: feel free to snap away, but not if you're an enemy alien. I'm not sure if this notice alone would be a sufficient deterent to any foreign types, keen on assisting the Third Reich.

On the subject of the Fatherland, I opened a 1912 textbook for German schoolchildren learning English and discovered this gently-amusing anecdote:

'James II., when Duke of York once paid a visit to Milton. In the course of conversation he told the blind poet that the loss of his sight might be a punishment laid on him for having written against the late King.

"If, " replied Milton, "the calamities of this world are indications of Heaven's wrath, how guilty must your late Highness's father have been! I lost only my eyes: he lost his head."'


Finally (and apologies to anyone who has already seen this on Twitter), here is a great British brand-name that we don't hear very much of these days. I wonder what happened to them?

Posted by Steerforth at 5:21 pm

It was a different world... another great and varied selection of illustrations.

These are gems. We are so pleased that you have held on to them some things are just do divine to part with.

The typography on some of these illustrations is so interesting and beautifully crafted. There does not seem to be the will (or, perhaps, the money) to take such time and trouble over the lettering these days. And yet it has such an impact......far more than the words themselves.

Could you not take the unsold books to a charity shop or do you reckon they would not want them?

Anne in Cambridge who loves b & w photos of England between the wars ...

The Hattatti - I think you're right. I suspect that most of the original work done these days is funded by retailers wanting a unique typeface for their brand.

Anne - Sadly my books are charity shop rejects, so they wouldn't welcome them back. A lot of my stock is stuff that has failed to sell in a shop, but has the potential to find a buyer in the global marketplace of internet bookselling. Well over half of my books never sell, even when their priced has been reduced several times, at which point I very reluctantly bin them and contact a paper recycling company.

I hate throwing books away, but I have to make room for new stock and I think two years is a reasonable amount of time to keep them.

Hello Steerforth,
I always enjoy reading your blog and looking at the gems you seem to constantly find.
Of the two photographs I believe that the street scene may well be The Promenade in Cheltenham. I couldn't quite distinguish the various text, but certainly as a lad I remember the steps, and running along them, if it is Cheltenham.

Jonathan - I believe that Cheltenham is also where they filmed the outdoor locations in Butterflies. I've never been there. I should do something about that.

Steerforth
You should make a point of visiting Cheltenham, a marvellous Regency Town. They filmed quite a lot of Butterflies in Pitville Gardens, I seem to remember.
Worth a visit simply for the areas and the architecture, Montpellier, The Promenade, Imperial And Montpellier Gardens. I have very happy memories of growing up there in the fifties, there along with Harrogate, another great Spa town. Unfortunately memories cannot take us back to these places.

What an intriguing set of images. I particularly like the lady in the white blouse and black slacks. Her hair is wrong of course, but her clothes look surprisingly up to date. (I probably noticed because I have been trying to find a decent skirt that is suitable for someone over the age of six.) Maybe fashionable classic clothes do exist after all. Have a nice weekend. xoxox